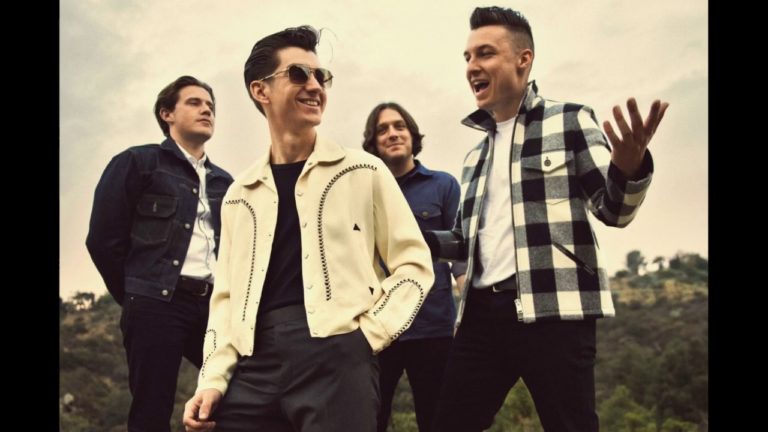 Rising from the dust of a small town in Northern England, Arctic Monkeys emerged twelve years ago as a gem of a band, with many different facets adding to their sparkle. Although they haven’t released an album since 2013, they remain one of my favorite bands of all time. They hold a special place in my heart, as their album AM is one of the first I bought on vinyl. Arctic Monkeys have countless diamonds of songs, but ten in particular stick out to me.

1.”No. 1 Party Anthem” seems like a fitting first song to note, for obvious reasons. This sultry ballad jumps right into the thick of things with lustful lyrics that describe a sort of stare-off between lead singer Alex Turner and a “certified mindblower”, surrounded by smoke in what we can assume to be a strip club. Turner croons “come on” relentlessly during the chorus, pleading with this untouchable woman. The instrumentals are simple, placing all of the cards in Turner’s voice, subtle guitar riffs entering only during the chorus. The song ends with us unsure of who wins the stare-off, but I feel that it’s most likely a draw, both parties going home lonely. I love the title of this song, because it alludes to the idea that not every “party song” has to be upbeat and happy.

2. “Mad Sounds” begins with a faraway sounding guitar that puts you in somewhat of a trance for the next three and a half minutes. This is my favorite song to listen to on vinyl because of its dreamy vibe that makes me sway back and forth with my eyes closed, transported to another world for just a little while. It reminds me of a song that could play through a high school gym in an 80’s movie during a prom slow-dance. If only I could have gone to that prom. Towards the end Turner sings, “then out of nowhere somebody comes and hits you with an ‘ooh la la la’” that will actually hit you straight in the heart, you’ll love it so much.

3. “Fireside” treads along the line of sultry and sad that we all love. Turner’s dilemma could either end in luxury or lustful loneliness. This track deals with the downward spiral of reminiscing on a past relationship, which we can all easily relate to. The song is just long enough to get us invested in the story, but ends sooner than we’d hoped, leaving us wondering if he’ll ever make up his mind.

4. “Snap Out of It” adds a theme of sensual danger to Arctic Monkey’s fifth studio album, AM. Turner pleads with a girl saying, “Under a spell you’re hypnotized/Darling how could you be so blind?/Snap out of it”. The music video especially toys with creepy yet sexy energy.

5. “Arabella” doesn’t stray far from “Snap Out of It”s dangerous vibe, but does possess a stronger rock feeling than the previous song. Turner describes a seductive woman named Arabella, saying “Arabella’s got some interstellar-gator skin boots/And a helter-skelter ’round her little finger and I ride it endlessly”. Every lyric in this song oozes sex and desire, and the music mirrors this aggressive intensity. Although the lyrics remain similar in theme, the song has many layers musically, with multiple instrumentals that take the track in a whole new direction. The black and white music video plays images of old-fashioned seduction, with Turner stationed at a vintage microphone looking like he’s fresh out of the 60’s, but tainted with a frightening edge.

6. “I Wanna Be Yours” has the qualities of a typical yearning love song, but with an edge. Lyrics teeter on mad, as Turner declares “If you like your coffee hot/Let me be your coffee pot/You call the shots babe/I just wanna be yours”. This song will set you in a daze, reversing the roles so that you will be the one begging Turner to be yours.

7. “Florescent Adolescent”: Not only is this song hard to spell, it is hard to keep up with, because it kicks at such a quick, energized pace. But it sure isn’t hard to love. Lyrics are cutely sexual, never coming off vulgar, but placing the listener in a flirty mood with lines like “You used to get it in your fishnets/Now you only get it in your night dress/Discarded all the naughty nights for niceness”, and “Likes her gentlemen to not be gentle”. Even though it may be tricky to sing along to all of the lyrics, you’ll never stop jamming out to the addicting beat. This one’s Arctic Monkeys gold.

8. “Riot Van” sounds like it’s recorded above radio static long ago, yet we can hear Turner’s voice clearly as he annunciates lyrics with drawn out s’s and growly words as if he’s just woken up. The track begins with a casual “so up rolls a riot van”, making you feel as if you’re hanging out on a couch with a friend who is about to tell you a hilarious thing that happened the other day. This casual feeling lasts throughout the song, with a steady guitar rolling through the entire 2 minutes and fifteen seconds, mirroring the rolling wheels on the riot van, but skids to an abrupt end with a dark image.

9. “Mardy Bum” begins with a trilling guitar solo that sets us up for a contemplative tune, but quickly pulls us into a more upbeat, exciting tempo complete with drums and multiple guitars. Turner’s voice shows its English accent in little snippets throughout this song with lyrics like “there’s a very pleasant side to you/a side I much prefer”, and my personal favorite, “Can’t we laugh and joke around?/remember cuddles in the kitchen/yeah, to get things off the ground”. “Mardy Bum” is a song that you’ll quickly learn the words to and want to play on repeat as you dance around your own kitchen.

10. “A Certain Romance” starts with an extended drum roll, preparing the audience for something intense. It merges into an aggressive jam of instruments, then falls into a softer guitar solo that will make you want to bop your head back and forth and smile. The intro lasts until 1:14, setting the stage for an epic song. In every track, but distinctly heard in this one, Turner’s voice is a mix of endearing familiarity and edgy wisdom, pulling off the band’s lyrics perfectly. Every word seems to flow into each other so well as if it is a speech read in a masterfully poetic way. Finally, just as it begun, the song ends with a killer instrumental that makes you sit back and revel magic of this band.

Arctic Monkeys’ music transports listeners to another world – one that can be dangerous and sexy, yet tender and beautiful. They are an uber-talented group of guys who went from messing around on instruments in each other’s garages to playing incredible songs for thousands of fans in sold-out stadiums. Their music won’t leave us for a long time, but let’s hope they surprise us all and make more of it to obsess over soon.

The Alt-Rock Chick highlights the best Alternative Rock music out there.