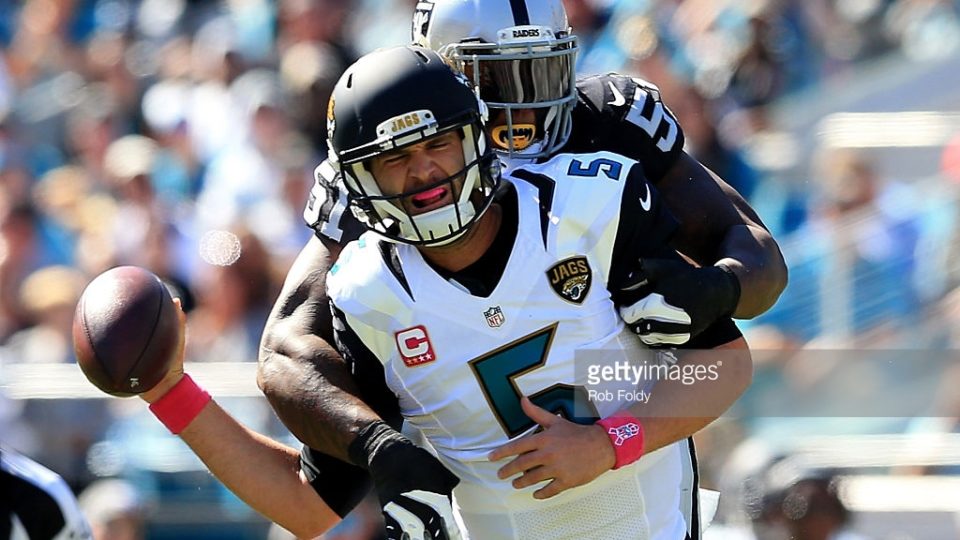 On the Right Path

In 2015 Blake Bortles was coming off his rookie campaign in the NFL, which was sub-par to say the least. The first year is always rough for a rookie Quarterback in the league, so the optimism was still there for Bortles after year one. Sure enough, Bortles made the stride that everyone had hoped for his second year and all the sudden the team from Jacksonville was a threat to compete in the AFC South.

During his 2015 season Bortles put up statistics some of the best QB’s in the league. He ranked top five in touchdowns and top ten in yards for the season while only 23 years old. He beat out the likes of players such as Aaron Rodgers, Matthew Stafford, and Ryan Tannehill in both categories. While there were many positive outlooks to his season, it is not a hidden fact that there were some struggles as well. A good amount of Bortles’ stats got inflated during “garbage time” of games making it look like he played much better than he truly did. He also struggled with completion percentage and interceptions throughout the season. Nonetheless the potential for Bortles was shown, and there was optimism that through lowering interceptions and raising his completion percentage he could be a solid Quarterback in the league for time to come.

Jacksonville saw this potential in Bortles and has constantly surrounded the team with young talent through the draft. On the offensive side, they have drafted young players such as Allen Robinson and Allen Hurns at receiver, both who played huge roles in the 2015 offensive success. They also have addressed the running game to complement the passing attack as they drafted both T.J. Yeldon and Leonard Fournette, as well as lineman Cam Robinson. Lastly, notable draft picks have been made defensively, drafting Myles Jack, Dante Fowler Jr., and Jalen Ramsey. These players have progressed extremely well thus far in their careers and show a bright future for the team.

But wait, that’s not all the help the Jaguars are giving Bortles, there is more. Jacksonville has gone out and made numerous free agent signings over the past couple years to better the team. Signing Malik Jackson and Calais Campbell on the D-Line, and AJ Bouye, Barry Church and Tashaun Gibson in the secondary.

Can Bortles Make the Next Step?

All together you look at the talent added to the team and it is extremely hard to not see this team making strides forward, yet they seem to be going backwards. Going into the 2016 season with some of the new talent listed above on the roster, Bortles led the team to a worse record than in 2015 and he lowered his total yards and touchdowns, but most worrisome his completion percentage and interceptions did not get any better. Nonetheless it was not time to pull the alarm and worry, the team was still young and needed to improve, it was just a small hiccup of a season, right?

Hopefully so, but the current 2017 season has not gotten off to much of a better start. Bortles has only thrown for 348 yards through two games, his completion percentage is lower than his average his past three seasons, and he has thrown as many interceptions as touchdowns. And yes, there is the disclaimer that Allen Robinson is out for the season but Bortles was unable to gather any chemistry with him last year and he still has other weapons around him. While it is still early in the season, the question starts to rise, is it time to jump ship in the Blake Bortles project? The talent surrounding him is enormous and he seems incapable to lead them to victory. If so what do the Jaguars do?

One alternative would be to get a Quarterback in the upcoming draft that favors the position heavily. Sadly, the Jaguars will most likely have too high of a pick to get one of the elite prospects in the draft. Their pick will most likely land a lower QB prospect that needs to be developed, which will do no good for the team as it is built to win in the next few years.

Insert a trade with the Buffalo Bills, a team that is trying to rebuild and get rid of any asset they have. Tyrod Taylor is 28 and does not fit the long-term plan of the Bills, but is a perfect fit for the Jaguars. Sure, he is not going to put up the numbers that Bortles did in his 2015 season, but the efficiency will be an enormous difference as in the past 31 games he averaged a 62.6% completion percentage, and 39 touchdowns to 13 interceptions. On top of that he brings a rushing threat with him, having rushed for 1000 plus yards and 10 touchdowns over the last two seasons.

Say what you want about Blake Bortles but the Jaguars are a team that is built to win now, and before too long pieces might start to slowly leave. The organization needs to act fast to take advantage of their current roster and Tyrod would be a perfect fit for the team in its current state, leading it to great success in the weak AFC South.