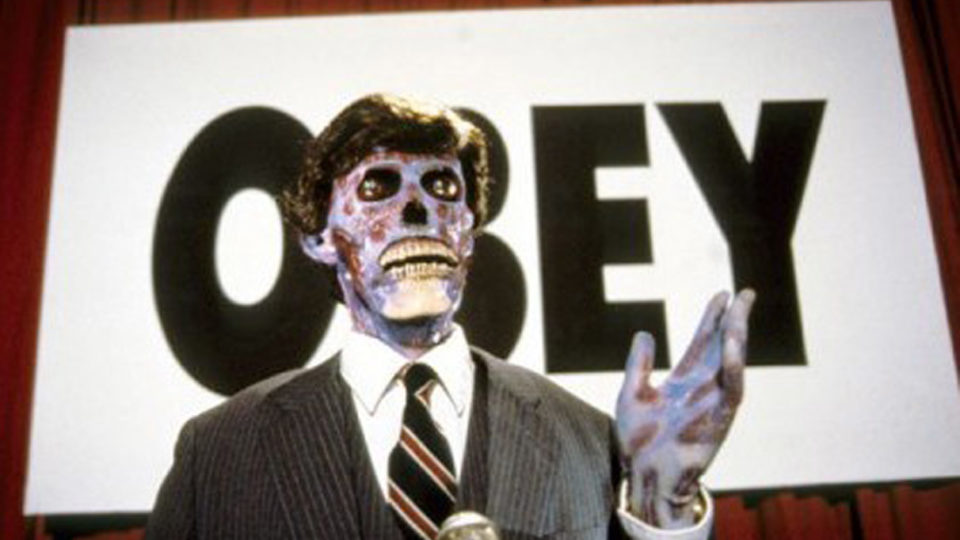 They Live is a 1988 science fiction movie written and directed by John Carpenter, based off of Ray Nelson’s short story “Eight O’clock in the Morning.” They Live, as is most of Carpenter’s body of work, fits the definition of a “cult classic:” not much of a blockbuster, fairly obscure but not completely foreign, and given a second life through its fan base.

The story follows an unnamed protagonist (listed as “Nada” in the credits) played by Roddy Piper, a famous WWF pro wrestler. Piper plays a drifter moving to Los Angeles from Colorado, looking for a new job. He joins a construction crew where he befriends another down on his luck man named Frank, played by Keith David. Frank takes Nada to stay at a homeless camp for some food and some rest. At the camp, Nada sees that something strange is going on with a neighboring church and a faint transmission on the camp’s television.

The transmission warns that humanity has been taken over and enslaved, lulled into complacency by hypnotic radio signals, and that rising up against their recently discovered masters is imperative. Nada investigates the church to find it’s a hideout for freedom fighters against this enemy, working on means of striking back.

After he discovers the true purpose of the church, the camp is raided by the police, and everyone is scattered, leaving behind only hidden boxes of sunglasses. Nada tries the sunglasses on, and through the lenses he sees an alien race in disguise among humans and the hidden messages they spread through advertisements and magazines and the like.

From then on, the film becomes a fun, exciting action-packed romp. The gunfights are entertaining, every punch and kick has weight to it, and all the action is kicked off by one of the best lines in movie history.

Roddy Piper is so entertaining as Nada. At first he plays it quiet and soft like a gentle giant, but when the plot picks up he hits the ground running, turning into the epitome of the 80s-90s pulpy action hero. He has the grit and intensity punctuated by schlock-filled one liners and moments of human heart and charm.

His costar Keith David does an excellent job as a hardworking down on his luck every-man. His reactions to the absurdity of their situation are really grounded and relatable. He’s really the heart and soul of the movie. Some of his actions may be frustrating to the audience because the plot stalls, but it’s all part of an earned character development that pays off so well the audience is rooting for him again.

These moments are not only a testament to Piper’s and David’s talent, but to Carpenter’s writing and direction as well. Carpenter put a human heart in his macho juggernaut and this really helps the movie thrive. He puts Nada and Frank through the wildest of situations and really makes the audience care about their well being.

It’s a punk rock opera with a lot of heart. The story is blatantly anti-establishment, anti-bourgeois consumer culture and places the responsibility for these societal ills on the shoulders of humanity. Sure, the aliens are the masterminds behind the humans’ captivity but they do it with the help of willing participants.

Underneath the shining paint of a fun action movie, Carpenter does instill a moral story of solidarity, particularly in the lower levels of society to work for what really matters. To stand up together, even in defying authority, to survive and thrive. Maybe consumer culture isn’t the right direction for humankind to truly thrive.

Elements like strong character and a provocative story make for a really memorable action movie, putting it head and shoulders above the other action films of its time. They Live is a hallmark of 80s action, and is a full on classic.

For more John Carpenter, check out The Thing, Big Trouble in Little China, and of course Halloween.