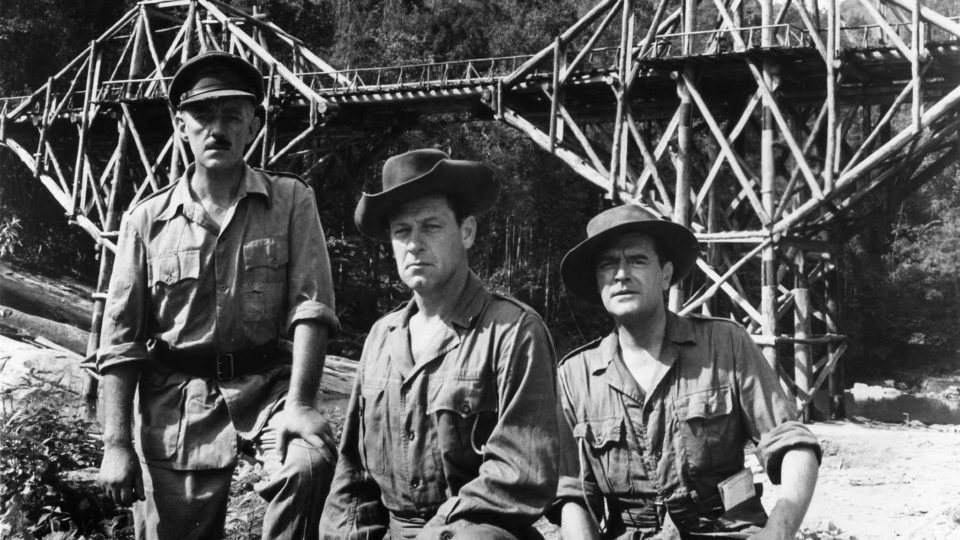 Filmmaker David Lean’s Bridge on the River Kwai is a different beast from what someone would expect from a World War II film. There’s hardly any action, in fact the action takes a total backseat to character drama. It’s a fascinating take on the war tropes and platitudes of the age from the noble Allied command forces to the stiff menace of the opposing force, in this case the Japanese. More nuanced humanity swells and swirls around these otherwise trope seeped characters and makes them all the more interesting to follow.

The story, adapted from a Pierre Boulle novel of the same name, follows a Japanese prisoner of war camp as it struggles to build a railroad bridge over a neighboring bridge. The camp has enlisted the labor of a captured British colonel and his men to put the bridge together, leading to a war of will between the British colonel and the Japanese colonel in charge of the camp. Meanwhile, the Allies plan a sabotage effort on the bridge with the help of a reluctant American who escaped from the camp when the British arrived.

The real star of the show is Alec Guinness, who plays the proud Colonel Nicholson, the kind of leader that every man aspires to be. He is level-headed, unflinching in the face of great odds, and cares for his men in an almost fatherly fashion. He lives and breathes British ideals of respect, code, and order, shown by his ownership of a copy of the Geneva Convention. He goes to great lengths in order to ensure the dignity of not only himself and his officers, but the soldiers under his command as well. This objective of his compels him to see the bridge complete to showcase the pride he has in his men and as a result himself.

As fun as it is to have a character with the virtues of Colonel Nicholson to cheer for, the film shows the audience the cautionary side of stubbornness and hubris that comes with such a larger than life character. As he gets his way, his confidence and pride in his men turn to arrogance and this comes to a head in the film’s climax.

In addition, the storyline of Colonel Saito, played by Sessue Hawakawa, plays out in a rewarding fashion as he goes from the foil to Nicholson to something more as the audience starts to see his point of view. On the outside he is a rigid military commander but on the inside he is a frustrated administrator tired of that white whale of a bridge and ever fearful of the consequences of failure. The moment that Nicholson and Saito share together towards the end of the film ties together the humanity in their stories in a mature, thoughtful way.

Starring in the parallel story to Nicholson and Saito is Jack Hawkins as Major Warden and William Holden as the escaped prisoner named Shears. Major Warden is the gung-ho jolly good British commander in charge of the Allies’ mission to sabotage the Japanese railroad. He has enthusiasm, swagger, and drive to land a blow on the enemy, another avatar of platitudes befitting an idealized military commander of an idealized war.

His motivation is a sharp contrast to Shears’ reluctant along-for-the-ride demeanor. Shears has long since grown tired of the conflict and he appears as though he may be a reflection of Warden someday. The conclusion of their story and how it changes them leaves a long lasting mark.

In addition to top notch acting and writing, the film boasts beautiful camera work and a proper score to accompany.

Bridge on the River Kwai is the first of three cinematic epics wherein David Lean commands totally grand shots and some of the best cinematography to this day.  In particular, the shots of the great bridge over the rolling river with the lush hills and jungle in the background prove to be the most memorable treats to the eye.

The score is fairly good with the great epic swells as well as lighter marching tunes in fitting and even poignant places. The choice of music for the final scene of the film is more than a little unsettling given the events occurred.

Altogether, Bridge on the River Kwai is a totally remarkable film, and one of the very best set in the second world war. The film is quite long, sitting at almost three hours, but it is absolutely worth each and every second.

For more of David Lean’s work, check out Lawrence of Arabia and Doctor Zhivago. (Both movies have Alec Guinness in them too)

In addition to Lawrence of Arabia and Doctor Zhivago, if you want to see more Alec Guinness, you can watch a little known film called Star Wars.

And lastly, the source material from Pierre Boulle. (He also wrote the book Planet of the Apes)