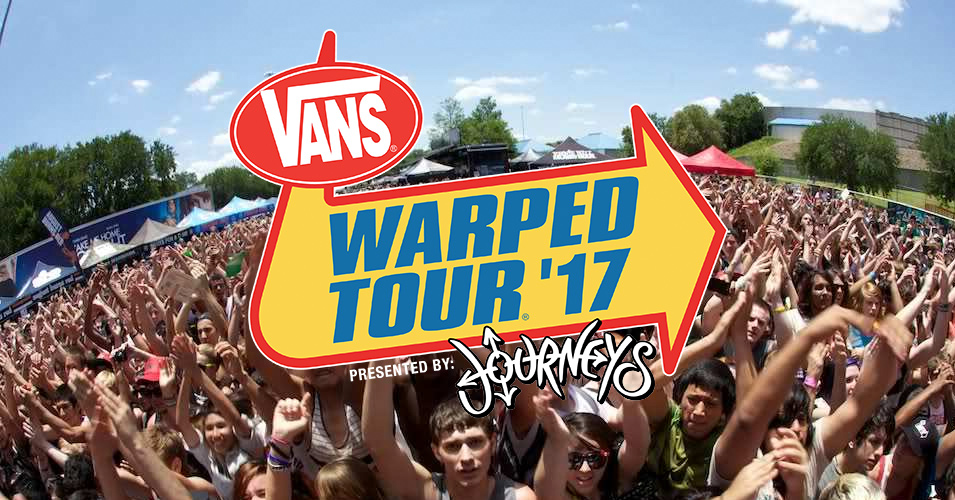 My alarm woke me at 7 am on Sunday, June 25th, 2017. Honestly, I probably didn’t need it — you know that feeling you get on Christmas Eve when you can’t fall asleep because you’re too excited for the day to come? Well, that’s the feeling I get every year before the Vans Warped Tour. Let’s be real, I’m more excited for Warped than I am for Christmas (which is when you know that Warped is legit).

If you don’t know how the Vans Warped Tour works, check out my last Warped Tour review, where I pretty much explain all that you need to know.

We arrived to the venue early again, and got in the Express Entry line. As soon as we got in, we bought the schedule and planned out our day. Honestly, there weren’t that many bands that I was dying to see this year (unlike last year), so everything pretty much worked out in our favor. We took a lap around the venue, figuring out where all the stages and stuff were, before we arrived at our first stop for the day: I Prevail.

I Prevail is an American metalcore band from Michigan that formed in 2014. It’s pretty impressive that after only being around for about three years, they’re already playing one of the main stages at Warped Tour. They kicked the day off at 11:50 am, and I can guarantee that there wasn’t a still person in the crowd. While I’m not super familiar with their music, it was easy to jam out with them. Their type of metalcore sometimes leans on the lighter side, which attracts fans more on the rock/punk side of the spectrum. They played most of their popular songs, such as “Stuck In Your Head” and “Scars“.

As soon as I Prevail wrapped up, we headed to the Full Sail stage to see Trophy Eyes, a punk rock band from Newcastle, Australia. While I wasn’t suuuper into them before today, they definitely put on a show that convinced me to check out the rest of their discography. They opened with one of their most popular songs, “Nose Bleed“. If you haven’t already, I would definitely check out their most recent release, “Chemical Miracle” which came out in 2016.

Up next was a band that I was really looking forward to seeing: Our Last Night. The last time that I saw them was at Warped Tour in 2015, and I was stoked to see them live again. OLN released a 7 song Ep titled “Selective Hearing” on June 9th, 2017. They opened with a new kick ass song, “Broken Lives“.

One of the things I like most about OLN is that their music is a hard rock/alternative with some thematic/borderline electro elements to it. Their last studio album, “Younger Dreams“, is definitely the most thematic of what they have released, but “Broken Lives” definitely sounds familiar to their music on “Younger Dreams.” Their stage presence was also very thematic — lead vocalist Trevor Wentworth danced all around the stage as water cannons sprayed the crowd. They finished their set off with their popular tune “Sunrise“, as Trevor and guitarist Woody jumped out into the audience.

Right after OLN’s set, they held a signing at their tent. We briefly got to meet the guys, who were humble as hell. I would definitely recommend checking them out.

At 2:45, we headed back to the Full Sail stage to check out one of my new favorite bands, Microwave. Microwave is a rock band from Atlanta, Georgia. They played fan favorites, such as “Lighterless“, “Stovall“, and “Vomit“. Microwave offers a refreshing sound that still has the angsty and disenchanting lyrics that we all love. Microwave is SUPER underrated, so if you check out anyone that I’m talking about in this article, make sure it’s Microwave.

After sitting down to eat and regain some energy, we headed over to the Journey’s Right Foot stage to see one of my favorite pop punk bands, Neck Deep. Before Neck Deep stepped up to the stage, a speaker from the nonprofit organization Hope For The Day came out to speak about suicide awareness. Every year, they hop on the tour and talk about the importance of speaking up and seeking help (for more information, check out their website here). The crowd takes on a somber tone, until the speaker prompts the audience to chant for Neck Deep.

The crowd chanted “Neck Deep” and then erupted into applause as the guys jumped on stage. One of the things I love most about seeing Neck Deep live (which I have now seen them live 4 times) is that they have so. much. energy. Lead singer Ben Barlow always seems super happy to be performing, as seen in his goofy facial expressions. Their setlist contained mostly songs from their most recent record, “Life’s Not Out To Get You“, with the addition of their two newest songs, “Happy Judgement Day” and “Where Do We Go When We Go“. This was definitely one of the best sets of the day, considering the enthusiasm and adrenaline coursing through everyone.

I was glad that after Neck Deep we had a couple hours to spare, because they definitely wore us out. We sat at the Full Sail stage, waiting for the next band, Movements. Movements is a post-hardcore/emo band from SoCal. And boy, did this set make me emo as hell.

“If you guys don’t already know, we don’t really make happy songs,” lead singer Patrick Miranda said as they jumped into a new song about Alzheimer’s disease. What makes them stand out to me is their mix of singing and spoken-word vocals. You can really feel the angst, hurt, and desperation in Patrick’s voice when he performs the spoken-word portion of their songs. I recommend checking out “Vacant Home“.

We finished the day off with Counterparts, a melodic hardcore band from Canada. I’m not too familiar with their music, however I enjoyed myself during their angsty, head-banging music. Their set made me forget about my aching feet, the dried up sweat, and the fact that the day was wrapping up. I’ll definitely be listening to more of their stuff, especially with their new album coming out in September.

The best part of the day was definitely this punk rock lady who had to be somewhere in her 60’s. She’s my idol, my inspiration. This is gonna be me at Warped when I’m 60.