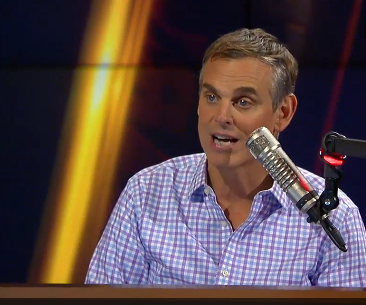 Nothing new but Colin once again brought up his ideas of Kirk Ferentz’s speed dial. The first number he’d imagine, “1-800-CREAM-PUFF”. Each year Colin ridicules Ferentz for dialing up the Northern Illinois’ and Iowa States of the world.

He has a point; Iowa hasn’t put much into its non-conference schedule in recent years. In addition to Iowa State, only two other power-five schools made the opponent list since 2008. Pittsburgh and Arizona, neither of which have been of the relevance needed to promote a win against them.

Iowa has scheduled strong opponents in the past, especially while Hayden Frye was at the helm. Teams like Penn State and Nebraska, prior to joining the Big Ten, and others including a ranked Arizona State. It isn’t completely out of the picture to play good teams.

Cowherd missed one key element, maybe the scheduling difficulties don’t stem from Iowa. Maybe the lack of teams on the schedule comes from the lack of value a game would have.

Most of this is hypothetical, relying on the idea that Iowa football is bound to be bad sooner or later. Most of us around here hope for a great year but deep down know it’s not out of the question to have a less that desirable season.

That being said, and the fact that everyone around here knows is important to the discussion. If all of us know then it’s hard to believe the schools playing Iowa don’t. They do know what the product on the field could potentially be, especially if they get Iowa on a down year.

Teams scheduling tough non-conference opponents are looking for return on investment. Taking a risk and lining up against another ranked opponent offers positives in both outcomes. Win or lose against a highly ranked team, assuming you’re also a good team, produces results that are very similar.

When Oklahoma and Ohio State plan matchups between them, chances are both will be ranked. A game of that magnitude draws a large national following and has big stakes. Win and the season turns from ‘can we make it in’ to ‘we’re in, let’s stay there’.

Losing that game, although losing is never great, brings with it some positives. You’ve lost to a good team, producing the much talked about ‘good win’.

Iowa can’t guarantee any of that. On a great year, like that of two years ago, losing to Iowa is considered a good loss. That is if there were a team on the schedule needing that. Beat Iowa that year and you’ve picked up a solid win. The only loss on an 11-1 record could help a team trying to make the College Football Playoff.

If Iowa could offer a consistent good win or good loss opportunity, teams would answer if Ferentz called. Iowa would also accept if those schools called. Constantly producing a benefit attracts.

Opponents like Oklahoma, USC or Florida, all of which Cowherd mentioned at some point, would play Iowa if they were sure they’d get a return on the risk. Currently Iowa doesn’t offer enough to make it worth the risk.

Cowherd is right, Iowa could call more. They could try to find a way to schedule opponents that will increase their strength of schedule. He does still miss the point.

College football is uneven; it always has been. Some schools have great years now and again. Regardless of schedule, an undefeated season isn’t easy. Iowa fell exactly to what they earned, if they played a stronger team and won the conference title game loss wouldn’t have mattered.

If someday Iowa is consistently good enough to attract top-tier opponents, it will happen. As for now settling for the schedule will have to do. In the near future moving back towards playing middle of the pack power-five schools, like Pittsburgh, would be a step in the right direction.

For Colin, things like this take time. Right now, Iowa is the fake ID of college football. Sooner or later everyone turns 21 and gets to enter the club.