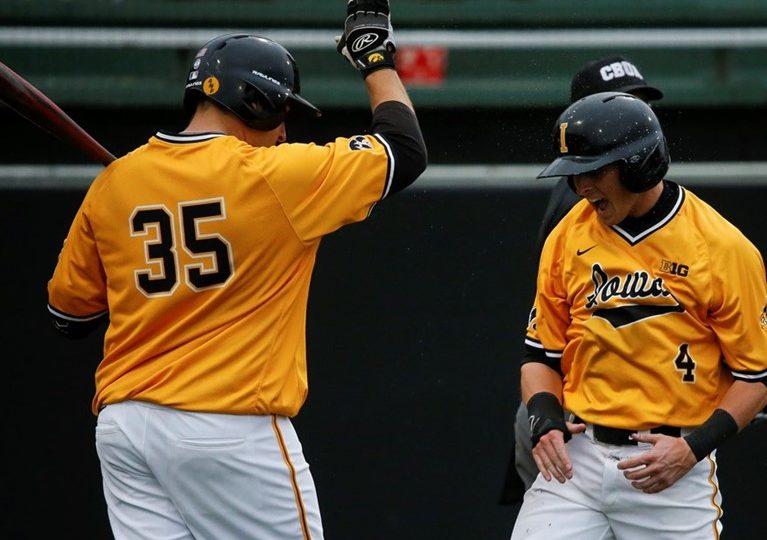 Iowa City – The Iowa Hawkeye baseball team captured its 20th win of the season on Tuesday after a 4-1 victory over Western Illinois. With this past weekend marking the halfway point of the season, let’s take a look at how the men’s baseball team is doing thus far.

The Hawkeyes have found themselves with a 20-11 overall record but just 3-3 in Big Ten play which puts them tied for 7th in the conference with Michigan State. Coming up this weekend is a vital three game series against the Nebraska Cornhuskers who currently sit at number two in the Big Ten standings with a 4-1-1 record and a similar 20-11-1 overall record.

Iowa took a big blow to their starting pitching rotation early in the year when it was announced that junior pitcher, C.J Eldred, would miss the season with a right elbow injury that would require surgery. But none-the-less the season continued on and while in the pre-season Eldred claimed that himself and fellow starting pitcher, sophomore, Nick Gallagher,

could be “the nation’s best 1-2 punch in a weekend rotation” Gallagher had to take that job on his own. Half way through the season Gallagher hoists a very respectable 2.15 ERA with a 4-1 record in 7 game appearances (all in which he started). While Gallagher has been productive in his all of his starts, another sophomore pitcher, Zach Daniels, has made the most out of his opportunities. While Daniels has struggled at times, he has given up a tied team high 3 home runs; he currently sits tied at 3rd in the nation among all D-1 baseball players with 6 victories. While Daniels comes in during relief innings, his wins come in large part thanks to the Hawkeye bats.

Leading the way for the Hawkeye hitters is Junior First Baseman, Jake Adams.

Adam’s currently is ranked 4th nationally with his team high 13 home runs. Adam’s is also ranked 8th in the nation in runs batted in (RBI) with 43 but those runs wouldn’t be possible without hitters like Mason McCoy batting in front of him. McCoy another Hawkeye Senior, currently sits at 34th in the nation with only 9 strikeouts in 121 plate appearances. McCoy who is currently batting .347 (second on the team) and not only is McCoy getting the job done at the plate, he’s also excelling in the field. McCoy is currently helping the Hawkeyes defense, which is ranked 17th in fielding percentage, by upholding a .983 fielding percentage himself. This might not be a team that will get into a “run-fest” with you, but they will make the plays they need to and will wait for you to make the mistake for them to take advantage of.

Going into this weekend’s contest against Nebraska, the Hawkeyes need to be ready to swing the bats as the Cornhuskers are currently allowing over 8 hits a game but have the Big Ten’s second lowest earned run average with just over 3 which places them in the top 25 in the nation. First pitch is scheduled for Friday April 14th at 6:35 in Lincoln, Nebraska.