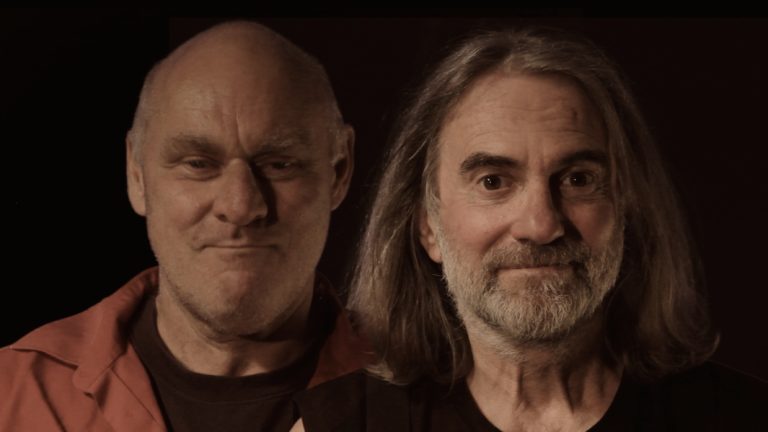 “Faust is here. Are you kidding me? Faust is here!” said a very excited lady standing right next to me as we waited for Faust, the German Krautrock band to take the stage. Faust had formed in the 70’s, split up, and then returned as two separate bands. The one that I saw on the rainy night of April the 5th was not at all what I expected. However, before I could listen to Faust, I listened to their two openers, Bob Bucko Jr. and Mamiffer.

What I thought was going to be the longest night of life ended up being not so bad. I showed up at Gabe’s pretty early and I sat down at one of the tables and waited. Since I was already not sure how this night was going to go I kept looking at the time. When it finally turned 8:00 I waited for Bob Bucko Jr to start his set. Bob took forever to

actually start. Okay… it was 10 minutes. Bob walked up and just started playing like it was no big deal. As I sat at my table and listened to Bob Bucko Jr. I couldn’t stop staring at the video that was placed next to him. Which to be fair was probably his purpose. While I did think that Bob was talented his style of music isn’t for me mainly due to the fact that during his entire set he didn’t sing many words and I need words in my music. The crowd however was all about Bob Bucko Jr. They stared intently at the video and at him. They nodded their heads to the beat of his music. One guy even had his eyes closed and was swaying from side to side.

After Bob Bucko Jr finished his set, Mamiffer took the stage. Now with them, I thought they were talented but I

didn’t really like their music. Mainly because for the first 10 minutes, it sounded like static or like a plane. Frankly I’m still debating, with little interjects of guitar and what I think was a bass. The band consists of three performers, two guys and one girl. When the girl finally started singing I couldn’t understand a word she said. Also, during their entire set they stayed at the same pace the entire time and I couldn’t handle that.

The crowd on the other hand was doing pretty much the same thing that they had been doing during Bob Bucko Jr’s set, only there were more people. About half of the crowd had their eyes closed as they swayed back and forth and the other half had their eyes open but they were still swaying back and forth. Both Bob Bucko J0.r and Mamiffer are talented and they weren’t as bad as I had thought they would be.

By the time Mamiffer had ended their set, the crowd had grown to pretty much the entire upstairs part of Gabe’s. I decided to get closer to the stage so I could pictures, but my camera was being dumb and my phone isn’t that great so I decided to not give a terrible impression to not show the pictures or videos I took (they look really bad). Anyway, as I got up from the table I heard a guy say, “I’ve seen them before. They’re good but they’re not awesome.”

However almost immediately after he said that, I ended up in front the lady who was extremely excited at the fact that Faust was there.

As the band, consisting of Jean-Herve Peron, Werner Diermaier, and Maxime Manac’h, took the stage I listened to what people around me were saying. Other than the more commonly phrase, “This is going to be great.” I heard “You never know what they’re going to do” and “They have instruments that I didn’t even know about.” Finally JHP started talking and pretty much after anything he said it got huge cheers from the crowd. Then he said, “Thank you for your smiles and the sparkles in your eyes” I was curious so I looked and about 95% of the audience (of what I could see) had smiles and sparkles in their eyes.  I had a feeling that no matter what the band did that crowd would have still applauded them.

They got started and I wanted to leave. They started out with a slow song similar to what both Bob Bucko Jr. and Mammifer had done and I couldn’t handle it. Don’t get me wrong, they had talent but I didn’t want to listen to two hours of the same things that I had listened to for two hours before.

Thankfully, they picked up the pace and the rock and electronic music began. I like fast-paced music so for me, this was glorious. The rest of the concert slowed down as the night progressed but it wasn’t like the other two performances. Mainly because at one point they had a jackhammer on stage and for another song they went into the crowd and had the entire crowd singing along with them (I got to touch Maxime. He seemed nice).  Faust has existed in one way or another for many years and it was clear why.

Before April 5th if you had asked me what I thought of Faust I would have said “eh.” After April 5th, I’ll be saying, ” They’re good, really good.”