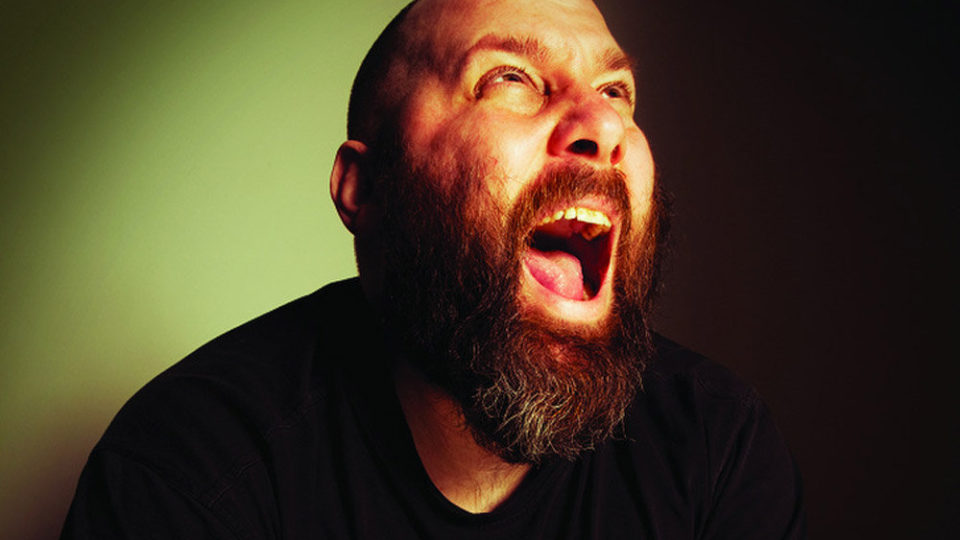 From the very beginning of the night, the crowd was ready for Sage Francis. With only 4 days to promote his arrival, there was a high chance that not many of people would be able to go see him. However, the venue was packed with fans who were buzzing at the chance to see Sage. Before Sage took the stage it was AWTHNTKTS (AW-THN-T-KTS ) who began the night with a crazy amount of energy.

I had decided days before the concert that I wasn’t going to listen to the music of either AWTHNTKTS or Sage Francis. The reason being that I wanted to be able to formulate an opinion as the concert happened and not have pre-determined ideas. I’m so glad that I decided to wait until the concert to hear their music because both hip-hop/rap performances were absolutely amazing. From the very beginning to the very end there was a massive amount of energy and excitement that filled the venue.  AWTHNTKTS are a hip-hop collective from Iowa City consisting of

three emcees and a DJ named ION, johndope, Romulan, and DJ johnnysixx. As the group got ready to take the stage I listened to the conversations taking place around me. Most of them, if not all, were about Sage Francis and how excited they were to watch him. AWTHNTKTS began their set and then one of the members said, “It’s about to be a really good show” and he was right.

From the get-go the entire night was full energy and was a really good show. People were nodding along to the beat and as I surveyed the crowd it was clear that people had shown up for a good time. I enjoyed listening to this group not only because I already like the genres of hip-hop and rap but because they actually sounded good and looked like they were having a great time which transferred to how the crowd felt.

After the end of their set and after waiting for a bit, it was finally time for Sage Francis. As I looked over at the crowd the people in the front seemed much more excited than those in the back.  If I had been standing in the back then I don’t think I would have gotten the same experience out of either performances.

After there had been a cancellation, Sage was asked if he wanted to perform  and he had said, as he told the crowd, “let’s do this shit”. A few minutes before Sage actually got on stage I heard someone say, “Bizarre Ride cancelled. Which is fine because Sage is better anyway.” This gave me hope that the night would continue to be energetic and worth my time. It totally was. The minute Sage got onstage there was instant cheering. In fact, every action he did and every word he said got a cheer from the audience.

Not only did Sage lower the music multiple times throughout his set so that lyrics, similar to the ones above, could be heard better but he also belted out some pretty great raps.

During the night, Sage would pause and tell a story. One of his stories was to set up to a song. He discussed how a girl had told him to “get over yourself” and that this caused him to write songs about heartbreak. He even mentioned that he was “the Taylor Swift of underground hip-hop” but that he grew up and evolved and was actually embarrassed of the heartbreak songs. At the end of his story and before jumping into his next song Sage said, “We’re all pieces of shit, you live long enough you become a piece of shit.” What did the crowd do? They cheered.

Part of my amazing experience at Sage Francis’ concert was the crowd themselves. Frankly, a lot of them were tipsy or full-blown drunk but it definitely helped the atmosphere. In fact, his fans are so loyal to him that even a pregnant women, who at the end of the show I discovered was named Allison (not sure if correct spelling), was in attendance. She was there with her partner, Drew, and both of them were big Sage fans. So much in fact that they will be naming their daughter Sage. Seeing this dedication not only from them but from other fans who were in attendance aided in my listening and enjoyment of Sage Francis. Both AWTHNTKTS and Sage Francis displayed great talent and amazing energy that made you want to get up and have fun. Which I did.

I highly recommend that you listen to both as they will be get you energy up and will be worth your time and if they aren’t well in the words of AWTHNTKTS, “If ya ain’t down for hip-hop please leave.”