Graphic writer and Iowa graduate, Kristen Radtke, took on Thursday night of Mission Creek Festival to present the very first live reading of her new book Imagine Wanting Only This.

As this was my first time attending a literature reading, I was quite unsure what to expect. I arrived at Prairie Lights (one of my favorite bookstores) around 5:30pm. I then headed up stairs to catch a few pictures and grab a coffee before the reading started.

By 5:55 all of the chairs were full, with a group of overflow sitting on the floor in the back. I was pleasantly surprised to see this large of a turnout.

After a lovely introduction that gave the crowd an idea of the presenting author’s writing style, Kristen Radtke took the floor. She began by starting the night with the unfortunate news that her good friend who was set to do the reading with her, Lina Maria Ferreira Cabeza-Vanegas, was not going to be in attendance due to being caught in a flight delay in Charlotte. 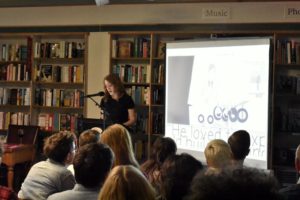 She then began reading, accompanied by various art from Imagine Wanting Only This projected across the large screen next to her. While we only got a short bit of the book, and she jumped around quite a lot I was able to gather that the story was focused around a young adult girl and all of the trials and tribulations she faces throughout the course of these years. Radtke mentioned at one point that the young girl depicted throughout the book was in the crowd at Prairie Lights.

Many of the scenes took place in Iowa City, as the main character was a student at the University of Iowa for part of the book. This character states that she appreciates Iowa City as it is “an easy place to feel you have conquered.”

Throughout these depictions Radtke mentioned various aspects of daily Iowa City life from the ‘cobblestone road leading to her front porch at her apartment’ to ‘looking through bar windows downtown’. It was very interesting to see the author’s view of Iowa City presented in this form.

Other parts of the story were a bit darker. Including the loss of one of her friends, Seth, who was a photographer that she seemed to have a high level of admiration for. She also brings in strange post apocalyptic fantasies which I found to be the most intriguing aspect. Radtke has a fascination with ruins throughout the world and you can see certainly see that in her writing.

A few of my favorite quotes from Radtke and her novel were “I wanted to tell someone how much I loved this, so I wrote it down instead” and “We all fantasize disaster”. She not only has a way with creating art, but also an exceptionally beautiful way with words.

The reading was quite short, she began a little after 6pm and finished up prior to 6:30pm. Her reading was followed up by opening the floor to the audience to ask questions.

Through listening to her answer these questions I learned several interesting details about her life and career as a writer. She confessed to not being much a comic book fan as a child, like many graphic novelist tend to be, she even admitted feeling quite overwhelmed by the idea of doing a graphic novel before starting her first. She credits being fired from her high school newspaper staff her senior year, as her motivation for going to art school which I found quite humorous. 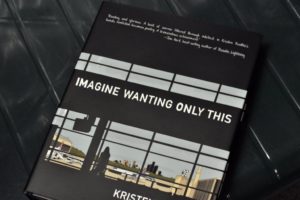 My first literature reading experience was eye opening and ensured me that it will not be my last. Being able to see an author present their work in real life brings the book and meaning to life in a whole new way.

In addition to copies available at Prairie Lights, Kristen Radtke’s brand new book Imagine Wanting Only This can be purchased here.