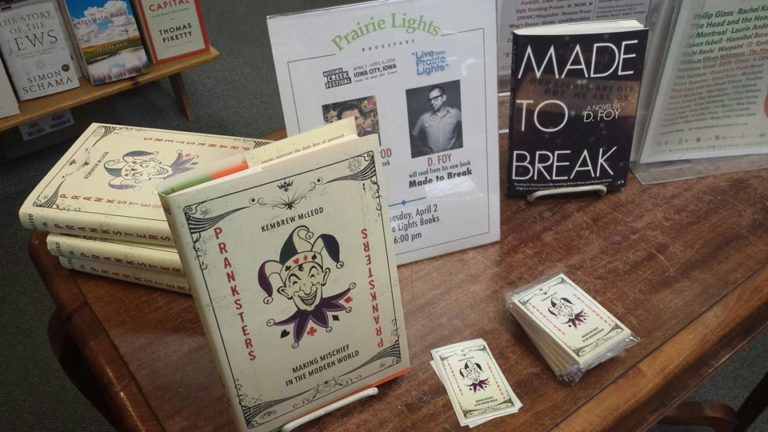 Last night, Prairie Lights  hosted D. Foy, fiction author, and Kembrew McLeod, UI Communications Studies professor and author. The evening started with D. Foy reading an excerpt from his newest book, Made to Break, a tale about five sick friends who spend the summer at Lake Tahoe. Voy began with the prologue, which he recited from memory. Next, he dove into a chapter, where he took on the narrator’s voice by adopting his sarcasm, directness, and aggression. Foy told the audience that they were by far the largest he crowd had had on his book tour, and Iowa City was certainly glad to have him. 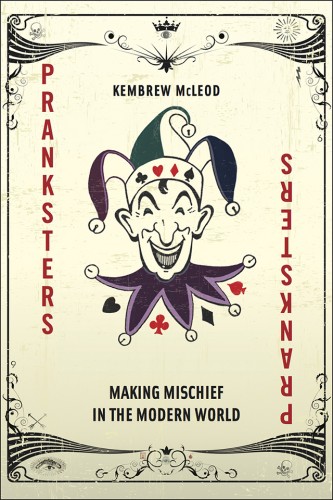 Next, was Kembrew McLeod. McLeod read from his just released book, Pranksters, which tracked the role pranksters have played in English and American society since the likes of Jonathan Swift and Benjamin Franklin. He read from his book that he had “no interest in cruelty” and chose only to include pranks that had the aim of enacting some sort of change, whether it was social, cultural, political, or economical. Considering the subject matter, it wasn’t surprising that McLeod’s reading was light, sarcastic, and had the perfect amount of dry wit to keep the audience surprised and laughing. The Q&A session largely revolved around McLeod’s own pranks, which include him dressing up more than once as a robot to get noticed by big politicians.

Prairie Lights Bookstore is now selling copies of Made to Break and Pranksters. McLeod has also provided Prairie Lights with prankster trading cards, giving synopses of some of his favorite pranks featured in his book.