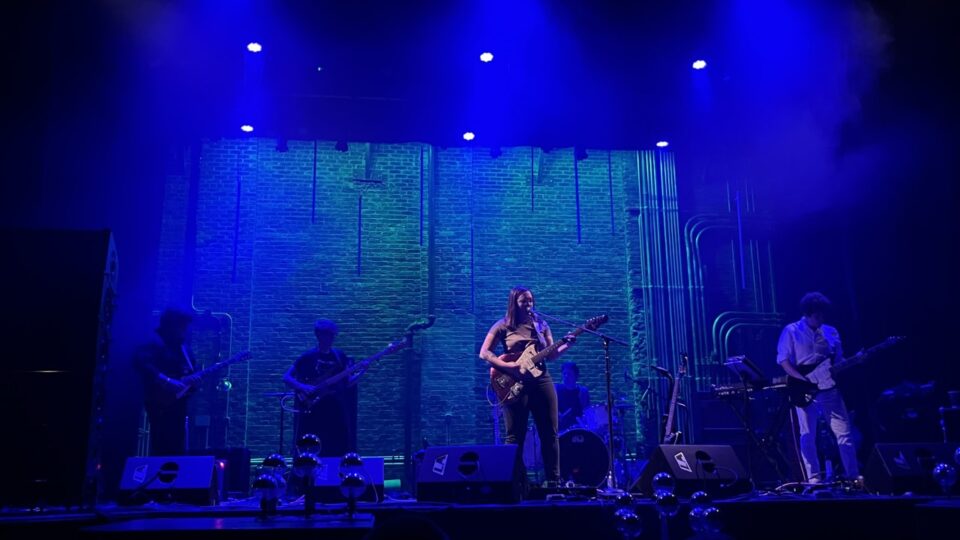 Bright skies welcomed the last day of Mission Creek on April 9th, breaking a streak of grey clouds covering Iowa City. I interviewed Soccer Mommy and her manager in the outdoor seating area of Quinton’s (next door to the Englert), one of the many places with outdoor seating on the bright day.

During the interview Soccer Mommy mentioned that her upcoming album Sometimes, Forever strays from Color Theory’s nostalgic recollection of the 90’s and 00’s, this time opting for “electronic… and ambient elements,” featuring more “glitchy” songs similar to her 2021 single “rom com 2004.” In addition, vocals will be a more prominent part of the album, featuring sections of Sophie Allison’s isolated vocals as well as intricate three-part harmonies, “not just ‘oohs and ahhs’, like instruments.”

Seats filled up quickly before Soccer Mommy’s 9:30 set. The concert featured some of Soccer Mommy’s hits, such as “Circle the Drain,” and “Cool.” In between songs Soccer Mommy’s instrumentalists included ambient sounds with veins of distortion, captivating the audience while members switched instruments. Allison, both the vocalist and guitarist, switched between her three different guitars onstage.

Soccer Mommy performed introspective songs such as “Royal Screw Up” as well. Hints at Soccer Mommy’s new sound for the upcoming album can be heard in her newest single “Shotgun.”

The Englert Theater’s light system provided an other-worldly experience with darker shades of purple, blue, and red, as well as a rich green light that flashed behind the stage. People in the audience were dancing the entire show, especially a cluster of dancers on the left side of the stage.

The concert included superb performances from drummer Rollum Haas and keyboardist/guitarist Rodrigo Avendano. Haas delivered a fierce, commanding drumbeat and increased the complexity of his fills compared to his tracks on the album, giving avid listeners a different live sound. Avendano, the guitarist behind the main riffs in hits such as “Your Dog” and “Circle the Drain” was active whenever he was on stage, sometimes switching between playing the lead guitar and harmonizing keyboard in the same song.

Overall, Soccer Mommy earned the headline spot at Mission Creek Festival with their bright-sounding indie underpinning the deeper, darker meaning looming in the lyrics. Sometimes, Forever releases June 24th and can be pre-ordered through her website.