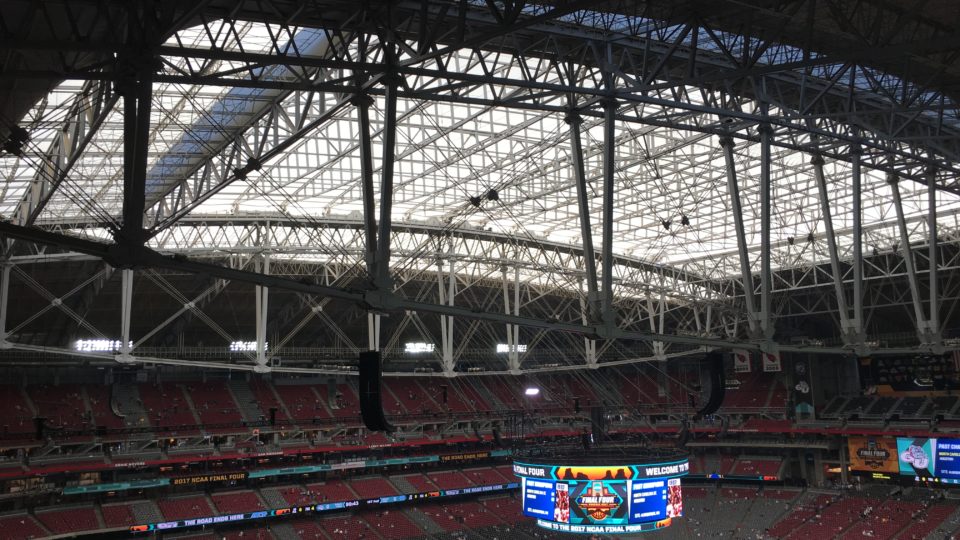 Glendale, Arizona – The thought of sitting in the rafters is one thing but actually doing it is another.

Looking past the grey painted, slightly rusted beams supporting the wide spanning roof just to see the figures move on the floor. Sitting in the same plain as the massive light fixtures illuminating the stadium creates its own challenges. Those daring enough to look straight ahead meet with a blinding white light.

On the floor, the players look like ants. It takes multiple trips down the floor before the distant person is matched with a name and number on the video screen. Guessing is the only hope of seeing who committed a foul if more than two players are in the area.

The stadium tries its best. Close your eyes and the floor feels feet away. Floor noise, the bands, and even coaches chatter is pumped out of hanging speakers to increase the experience for the ones on the upper level.

This is how watching the men’s Final Four from the nose bleeds goes for the fans wanting to experience college basketball at its best. Fans jam into a football stadium to watch a game played in an arena four times smaller. Needless to say they are a few difficulties.

Before going forward, the key note to all of this. The Final Four ranks with the Super Bowl in overall fan experience. Nothing beats watching the four teams, down from 68, battle to cut down the nets. Complaining about sitting near the top would be selfish but watching from above does provide a new twist.

From above, everything is within view. Not a very clear or close view but never the less still there. As the lower bowl watched South Carolina quickly move the ball on a fast break, while we saw Gonzaga star Przemek Karnowski lay in the lane clutching at his right eye. On that play the reaction came from upstairs first.

The only problem was no one knew what had actually happened. Some fans thought concussion, others thought he got slapped in the face, and a handful correctly said he’d been hit in the eye. He ended up going to the locker room for treatment, which was clear as day for everyone in the stadium. Karnowski stands taller than seven feet.

An overwhelming amount of fouls highlighted Monday nights National Championship game. Looking down at the scoreboard with just under ten minutes to go to find Gonzaga is in the double bonus. We heard the speaker amplified whistle often during the second half.

At every call very few could truly say, with certainty, they knew what the call was and who it was on. North Carolina senior Kennedy Meeks, who played with four fouls late in the second half, fouled out for many upper level fans numerous times. All eventually came to learn it was a jump ball or a foul on Isaiah Hicks.

During the title game people used binoculars to feel closer to the court. With improved internet signal inside University of Phoenix Stadium, fans would have the March Madness app open to live video, giving them up to the minute replays. That was the only way anyone figured out why Joel Berry II shot free throws for an unseen technical foul.

An overwhelming amount of plays left the upper level questioning, thankfully the game was decided by a center court turnover. Everyone got a semi-equal view of the game ending play.

Watching in person and taking in the near unbelievable environment is unmatchable. Whatever seat, high or low, the experience will not disappoint.