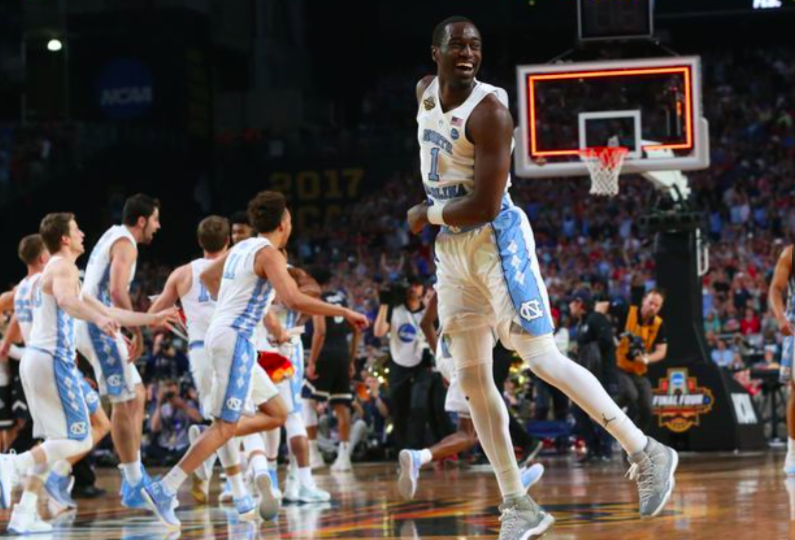 IOWA CITY, Iowa – This season’s title game didn’t have the same level of excitement as last year’s, but it was good enough for the Tar Heels.

After being on the losing end of Kris Jenkins’ game-winner last year, North Carolina returned to the Final Four seeking redemption. They got it.

In a slow-moving game of poor shooting and questionable foul calls, the Tar Heels did just enough to outlast the Gonzaga Bulldogs to capture the sixth title in school history and the third for head coach Roy Williams.

Typically in big games, there is a shot that stands out. A shot that puts the game away or widens the gap enough to make it feel out of reach. That shot never came for North Carolina. Not many shots did.

The Tar Heels shot just 35.6 percent from the field and 14.8 percent (4-for-27) from three. Hardly the showing expected from one of college basketball’s most efficient offenses. The team would not allow a less-than-average shooting night, to put it lightly, to send it to back-to-back title game losses. Instead, it found other ways to scratch out the victory.

In their win over Oregon in the semifinal game, two big rebounds from Theo Pinson and Kennedy Meeks with under six seconds to play made the difference. Against Gonzaga, it was a Meeks block that led to a Justin Jackson run-out dunk that capped off their title run.

The game was as even of a matchup as anyone could want in a national title game. Neither team led by double digits at any point in the game, and the longest scoring runs were both 8-0. First, North Carolina started the second half on that run. Gonzaga immediately followed with one of identical value. Even with the balanced play, the game was, well, just boring.

Officials called 44 personal fouls in the game. As a result the game never had a natural flow. It crawled along at a sluggish pace, and every time it felt like someone hit a big shot, a foul was called and everything calmed back down.

Excitement lacking, the Tar Heels prevailed this year. I’m sure they’ll take the monotonous win over an electrifying loss every time.

As for Gonzaga, defeat never feels good, and it’s tough to come up short.  Just ask half of the players in the opposing locker room. While the Bulldogs didn’t earn a victory, they did earn some respect.

This was the 19th year in a row the Bulldogs had made the big dance, but their first time reaching the Final Four. Failing to advance far enough in the tournament has led many critics to question whether Gonzaga is an elite program or not.

Elite? Not sure we can say that just yet. But make no mistake. The Zags are good.

There was nothing mid-major about the Bulldogs’ effort. No, the result wasn’t there, but not many teams get the result they want their first time vying for a title with a powerhouse like North Carolina. The next time Mark Few and his guys get to this point, they’ll be the ones hungry for redemption.

Another NCAA Tournament is in the books, and the North Carolina Tar Heels finally got their moment. There is just one more question left to ask about college basketball. How long until Midnight Madness 2017?