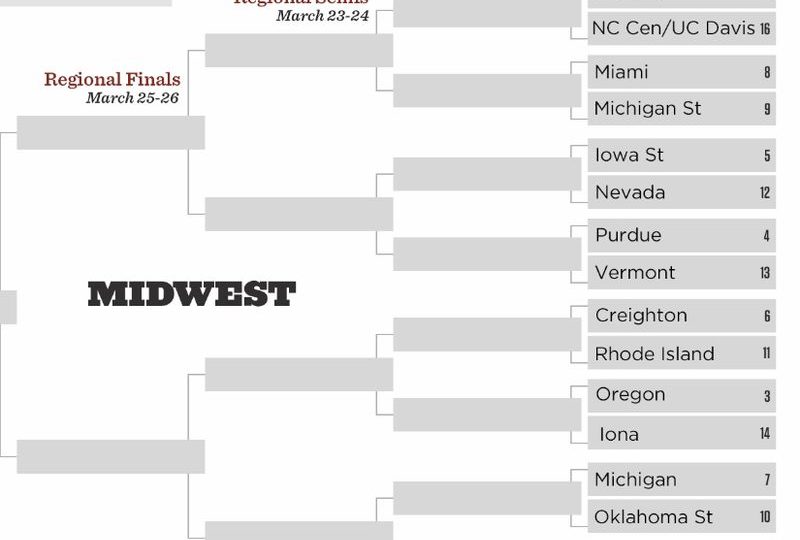 This is part three of our four part tournament coverage series. The midwest bracket is headed by Kansas, the #2 overall seed in the tournament. This regional looks to be the most wide open quadrant of the tournament considering each of the top seeds have more weaknesses than in the other regionals. Combine that with two major conference tourney champions seeded #5 and #7, and we might be in for some chaos. Chaos! Let’s get to it.

Kansas- The Jayhawks were in a great position to secure the #1 overall seed in the tournament, but they blew it by losing in the Big 12 quarterfinals against TCU. Their draw is still favorable, as the second weekend of the regional is played in Kansas City. That should provide a nice crowd advantage for the Jayhawks, which is significant considering they lost just one home game all season. The Jayhawks identity this season has been offensive domination, averaging over 82 ppg. Point guard Frank Mason is a legitimate candidate to win national player of the year, and rightfully so. Mason can score from anywhere on the court, and he can make plays for his teammates and get them open looks on a consistent basis. His 48.7 percent three point percentage is outrageously good, and that could be a major weapon for Kansas down the stretch. Mason has enough offensive support from shooting guard Devonte’ Graham and freshman forward Josh Jackson that allows him to play within himself and not force things. Kansas is a major force to be reckoned with.

Louisville- Louisville also lost its first conference tournament game, however they matched up against Duke so the committee didn’t hold the loss against them and still granted the cardinals a #2 seed. Louisville has been consistently really good, but was unable to put together a streak of consecutive great wins. They beat Wichita State, then lost to Baylor. Beat Kentucky, lose to Virginia. Beat Duke, lose to Florida State. Beat Notre Dame, lose to Duke. So there ya have it, they can beat anybody, but you have to beat multiple great teams consecutively to advance. Louisville has yet to prove that they can do that. Roster wise this is a typical Rick Pitino team, equipped with multiple fast and aggressive point guards and half a dozen 6’7-6’10 athletes that can guard multiple positions and wreak havoc in their patented full court press. If Louisville’s point guards Donovan Mitchell and Quentin Snider can be as successful as their predecessors Russ Smith and Terry Rozier were in March, the Cardinals just might be able to do some real damage.

Oregon- It seems that every single season a legitimate national championship contender suffers a devastating injury just before the big dance. This years victim of the injury bug is Oregon, as the Ducks lost their starting center Chris Boucher to a torn ACL in the PAC 12 tournament. Boucher is their third leading scorer, second leading rebounder, and leading shot blocker. The Ducks boast about as much natural talent as anyone in the country, with five double digit scorers that helped Oregon win 29 games and the PAC 12 regular season title. But without their anchor in the middle, getting to the final four will be an uphill battle.

Iowa State- The Cyclones enter the region as a #5 seed after winning their third Big 12 conference tournament title in the last four years, earning impressive wins against Oklahoma State and West Virginia. The Cyclones flew under the radar for most of the season after a 14-9 start, but they’ve caught the public’s eye winning nine of their last 10. The Cyclones can score, averaging over 80 ppg with four different scorers averaging at least 12 ppg. The engine that keeps them running is all-american point guard Monte Morris, who is their leading scorer and has the best turnover to assist ratio in the country by a large margin. He will be the key for the Big 12 champs.

Michigan State- It’s the time of year where the Spartans usually mysteriously fix all of their season long problems with a snap of a finger, but I wouldn’t count on that happening this season for Izzo’s squad. While uber-talented freshman Miles Bridges is very exciting to watch, he isn’t good enough to dominate games by himself. Not to mention this Spartan squad doesn’t play the type of defense we are accustomed to seeing them play. I know that they played the toughest schedule, but I don’t care, they lost the majority of there marquee match ups anyway. They aren’t getting to Kansas City.

Rhode Island- The #11 seed in the regional is entering the tournament on cloud nine after taking control of their own destiny. They have been on the brink of getting their bubble popped the entire last month of the season, but they took themselves off the bubble by winning the A-10 conference tournament in impressive fashion. They’re a confident team right now, and not only is their first round opponent Creighton without their starting point guard, potential second round opponent Oregon is hobbled as well. Rhode Island found themselves a pretty good tournament draw.

FR F Josh Jackson, Kansas- He was suspended by the Jayhawks against TCU in the Big 12 quarterfinal, forcing him to watch the team get upset from the bench. Hopefully he has learned his lesson, as he’s an integral piece to the title hopes of Frank Mason and company.

SO G Donovan Mitchell, Louisville- Mitchell is a unique player, as he’s sort of a tweener between the point and the two, but he’s a scoring machine that can score over bigs in the paint and he’s equally effective defensively. He’s probably the most complete player on their roster, so it’ll be imperative for the Cardinals that he makes his presence felt.

SR PF Deonte Burton, Iowa State- The Marquette transfer has come into his own in Ames, Iowa. He’s undersized, but he more than makes up for it with his athleticism. He can shoot, he can drive, he can run the floor, and he can score in the post. He’s a major weapon for the Cyclones.

JR SF Dillon Brooks, Oregon- He’s unquestionably Oregon’s best player and he can get a shot off against just about

anyone, but he can be a ball stopper at times. He needs to get his teammates involved to keep opposing defenses off balance. The Ducks might need Brooks to score 25 a night, but he has the talent to do so.

SO PF Caleb Swanigan, Purdue- Purdue probably has the best chance of any big ten team to advance to the sweet 16, and their hopes rest primarily on Swanigan’s shoulders.The Big Ten player of the year has a lot of skill and a lot of swagger, the Boilermakers are hoping that will be enough to lead them to Kansas City.

While Miami and Big Ten tournament winner Michigan should prove to be formidable opponents for Kansas and Louisville, I doubt either of the top two seeds lose in the first weekend. Dillon Brooks will be able to carry the Ducks to the sweet 16, but Louisville is too deep and too ferocious defensively, the buck will stop there for Oregon. On the top half of the bracket, Swanigan won’t be enough for Purdue against Iowa State. In the sweet 16, Kansas will have the crowd advantage, but their only home loss was against Iowa State. Monte Morris and Frank Mason is as good as point guard match ups come, and I think the turnover immune Morris and the Cyclones will come out on top. While Iowa State will be rolling, they don’t have the depth or the length that Louisville has. I think that Louisville will be going back to the final four for the first time since their 2013 championship run.