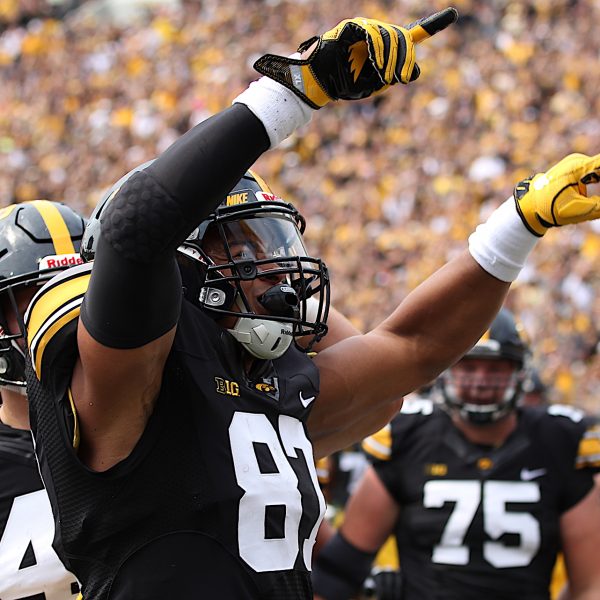 IOWA CITY – As college football kicked off around the country on September 2nd, the Iowa Hawkeyes kicked off their season at Kinnick Stadium. It was a perfect, fall day in Iowa City to go along with the perfect result the fans of the black and gold were looking for as their Hawkeyes won their season opener by a score of 24-3 over the Wyoming Cowboys.

It was a tale of two sides coming into the game as the Cowboys, and their preseason Maxwell Award candidate quarterback and maybe one of the best quarterbacks in the league, Josh Allen, was looking to air it out against the young and Desmond King-less secondary of the Hawkeyes. On the other side, Iowa’s quarterback, Nate Stanley, was making his first college start against a veteran Wyoming secondary. Allen came out in the first quarter hitting his targets as he went 8-10 passing with 47 passing yards, connecting with Austin Conway for half of those completions. Stanley on the other hand ended the first quarter going 0-4 and was intercepted by Rico Gafford with a little less than 11 minutes to go. The Cowboys could not capitalize in the first quarter as the score was 0-0 after a quarter of play.

Wyoming scored first early in the second quarter with a field goal to give themselves a 3-0 lead; however, that would be the last time they would put points on the board. On the next Iowa possession, they marched down the field (thanks in part to a 4th down conversion and Nate Stanley’s first completion for a 19-yard gain) and took the lead with Stanley’s first career touchdown pass to Noah Fant on a 4th and goal. The Hawkeyes quickly stopped the Cowboys to get the ball back only to give it right back when Nate Stanley was sacked and fumbled the ball away to the defense with under a minute to go in the half.

The Hawkeye defense would not let the Cowboys score. Josh Allen was called for grounding which pushed them out of field goal position and then on a 4th down, Tim Zaleski muffed the punt which would set Iowa up on the 32-line of Wyoming. The next play, after an offsides penalty, Stanley found Fant again for his second touchdown pass of the game to make it 14-3 Hawkeyes going into halftime.

Wyoming came out in the second half on fire. The Cowboys were driving down the field but had a potential touchdown pass broken up at the last second by Joshua Jackson which ended the drive and stopped their momentum.

Halfway through the quarter, Nate Stanley gots his third touchdown of the day when a 45-yard completion is taken in for the score by Nick Easley to make the score 21-3. With all the momentum going their way, the Iowa defense forces Wyoming into a three-and-out.

The Hawkeyes turned it over again when Stanley fumbled after a big hit, setting the Cowboys up with good field positioning. The Cowboys still could not put anything on the board as they had a touchdown call reversed and missed a field goal that drive.

Wyoming would get the ball back only to have breakout corner, Josh Jackson, pick off a Josh Allen pass and run it back 41 yards to give the Iowa offense the ball back with good field position. Iowa then kicked a field goal on the ensuing possession to give us the final score of 24-3.

Running back, Akrum Wadley ran for over 100 yards for the game, something that Hawkeye fans are used to seeing as Wadley rushed for over 1000 yards last year. Speaking of the Iowa rushing game, they added another 1000-yard rusher in James Butler which makes Iowa the only team in FBS with two 1000-yard rushers in the backfield.

“We both feel strong about this year,” Wadley said of he and Butler sharing the backfield.” If we keep putting in the hard work and we keep grinding and running behind this line, we’ll be good, we’ll be fine.”

Hawkeye fans will have something to look forward to from one, if not both of these backs.

It is not often a team that has four turnovers wins a game by three possessions but Iowa somehow found a way to shut down Josh Allen and in the process, gave Nate Stanley momentum heading into the highly anticipated rivalry game next week against Iowa State at Ames.

The Hawkeyes still have some work to do on both sides of the ball and hopefully they will figure it out in time so they can bring the Cy-Hawk trophy back to Iowa City.