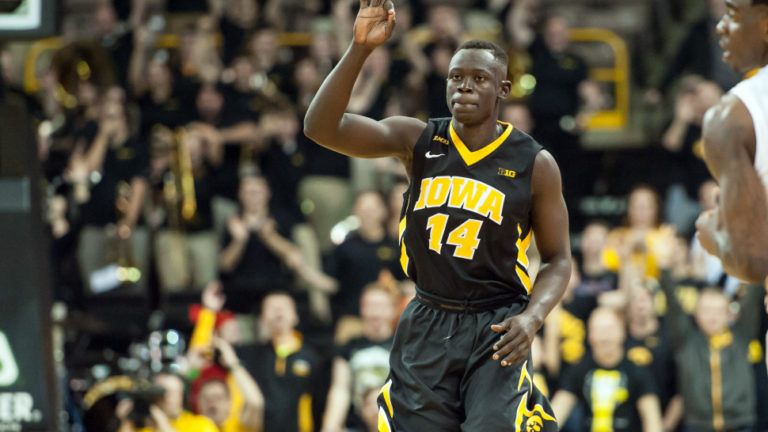 Iowa kicks off the NIT at 8pm CT on ESPN 2 tonight against the Summit League regular season champion South Dakota Coyotes at Carver Hawkeye Arena. While many fans are surely disappointed that Iowa lost its fifth straight Big Ten tournament game last week, ending their chances of a NCAA tournament bid, the NIT can provide this young team with a few more games together and an experience at Madison Square Garden. The 2013 team featured nine players set to return in 2014 and advanced to the NIT final, every returning player from that team never missed the NCAA tournament again. There’s reason for optimism.

That said, a first round home loss to an eight seed would be a huge let down, but it happens quite often. It even happened just last night to California. South Dakota won their conference for a reason, and if Iowa overlooks them their season may very well end at the hands of the Coyotes.

The Coyotes are led by two 1st team all-conference players, 6’9 senior center Tyler Flack and 6’3 sophomore wingman Matt Mooney. Flack excels with his mid-range game, hitting pick and pop jumpers with consistency and dragging out opposing big men that he can beat off the dribble. He averages over 15 points and just under 7 rebounds a game while shooting over 52 percent. He’s their anchor in the middle, and he has the skill set to exploit Iowa’s zone defense.

Matt Mooney comes in averaging 18.5 points a game, scoring over 20 a game in conference play and 27 a game in the conference tournament. He’s their primary playmaker, and he can make things happen in multiple ways. He’s taken twice as many three pointers as any other Coyote, so that’s something the Hawkeyes need to look out for. Mooney is excited for the opportunity. “The NCAA tournament is the ultimate goal, but it’s still exciting to play in the NIT” Mooney told KRUI. “The NIT is a great opportunity, we get to play against a Big Ten team and we’re excited.”

The biggest story line of this game is the return of former Hawkeye Trey Dickerson, who is now a senior starting at point guard for South Dakota. Dickerson leads the Coyotes in assists and is their third leading scorer at 10.4 ppg. Dickerson never got consistent playing time at Iowa, but he has at South Dakota and he’s had success out in the Summit league. The opportunity to knock off his former team has Dickerson fired up. “I definitely have a little extra juice for this game” Dickerson told KRUI. “I have a lot of great friends on that team, so I’m excited to see them on the court again.”

South Dakota doesn’t bring anything to the table defensively that Iowa hasn’t seen before, so the Hawkeyes should be able to score in bunches. As long as Iowa can contain Mooney, Flack, and Dickerson they should be able to advance comfortably into the second round.