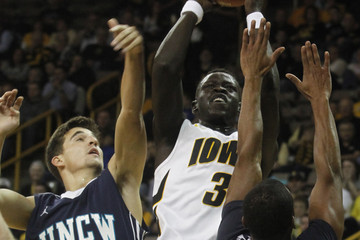 IOWA CITY, Iowa-  The University of Iowa Men’s basketball team saw its first action of the 2014-2015 season Sunday afternoon in an exhibition game against Northwood University of Florida: Coached by NCAA legend Rollie Massimino. The Hawkeyes overcame a sloppy start to win 92-51 thanks in large part to a spark provided by Peter Jok, Trey Dickerson, and Dom Uhl, all of whom came off the bench.

Jok, a sophomore guard from West Des Moines, led all Iowa scorers with 16 points on six of nine shooting: two of two from behind the arc.

“Pete’s had the same sprained ankle two different times, so I think that hurt his chances to get that (starting) job,” Head Coach Fran McCaffery said when asked why neither Jok, nor senior Josh Oglesby started along side Mike Gesell at the two guard. “It’s also affected his conditioning, which you could see today, but it’s amazing he’s got 16 (points) in 17 minutes, he’s got that ability.”

This isn’t the first time Jok’s displayed his ability to light it up as he had 10 points on four of five shooting in last year’s NCAA tournament game against Tennessee. He will be a valuable asset to Coach McCaffery this season so long as he can stay on the floor: injury and off the court issues have brought concern over the past year.

However, if he can lead the charge off the bench this season, along with some other newcomers, Iowa will have 10 players who can provide valuable minutes.

Uhl has the look of a freshman with a lot of muscle left to put on and a fairly raw skill set: shooting just two for nine from the field. However, his length, ball handling skills and athletic ability will be more than enough to earn him meaningful minutes as a freshman.

“His handle for a guy who’s 6’9″ is very unique he can go by anybody  he wants whenever he wants to… he sometimes gets to the rim and gets a little jammed up,” McCaffery said. “He’s got a nice touch I think what you’ll see him do is drive and finish with dunks a little more often as he gets older and stronger, and more confident in his game, his jumper needs work but it’s solid enough… he’s going to be a great player no question about it.”

McCaffery clearly has confidence in him, and so should we. Expect a modest freshman campaign from Uhl as he adjusts to the speed of the college game and continues to develop his body. But, he’s got the speed, skill, and desire to develop himself into an elite college basketball player.

Junior college transfer Trey Dickerson also provided some flare coming off the bench in his first ever game for Iowa. Dickerson flies up and down the court. His speed and athleticism are his strength, but don’t rule out this speedster’s ability to stroke it as well as he was two for two on his attempts from beyond the arc. He was three of four on the day with his lone miss on a breakaway where he got caught between a dunk and a layup and the ball got away from him resulting in a missed layup.

Coach Fran McCaffery has quietly obtained the future of Iowa Hawkeye Men’s basketball with sophomores Jok and Dickerson as well as freshman Dom Uhl. The trio won’t be spotted in the starting line up all too often this season, but all will provide valuable scoring and athleticism off the bench for the Hawkeyes in the 2014-2015 campaign.