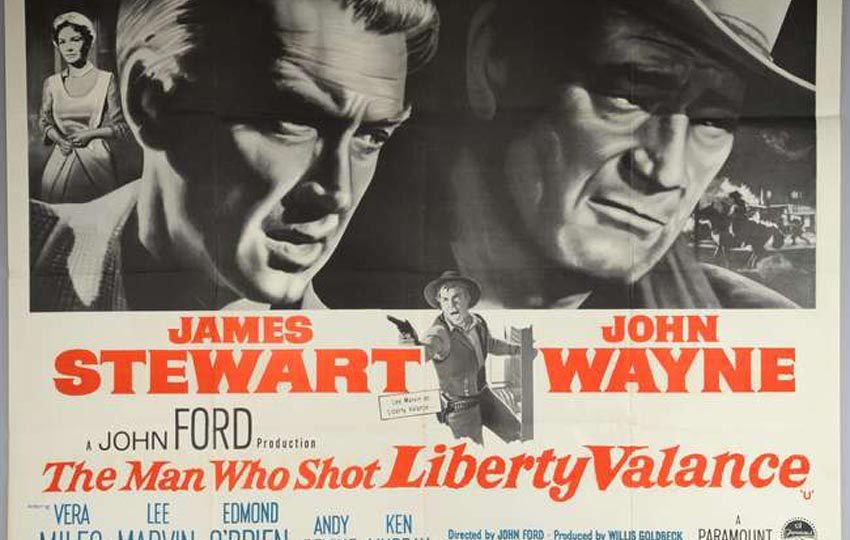 The Man Who Shot Liberty Valance is not your typical thrill of a Western flick. It’s a more mindful and very unique film, with the help of a star-studded cast. The film, based on the Dorothy M. Johnson story of the same name, was released in 1962, directed by acclaimed director John Ford, and stars James Stewart, John Wayne, and Lee Marvin. With a cast like that it’s no wonder The Man Who Shot Liberty Valance turned out to be such an excellent film.

The story begins with an aging politician named Ransom Stoddard (played by Stewart) returning to the tamed western town of Shinbone to attend the funeral of an old friend of his, a man named Tom Doniphon (played by John Wayne). After some prodding from the local newspapers, Stoddard tells the tale of his relationship with Doniphon and Shinbone, and how he came to be a politician, the tale of how he became a local legend by killing the vicious outlaw Liberty Valance (played by Lee Marvin).

Many years prior, Stoddard was on his way to Shinbone as an attorney until he was robbed and left for dead by Valance and his gang. Stoddard was recovered and taken to Shinbone by Doniphon, and was nursed back to health by a local Swedish family. After Stoddard gets back on his feet, he resolves to help rid the town of Valance and his gang but by law and not by gun. He also resolves to act as a teacher of reading and writing, much to the chagrin of Doniphon.

James Stewart is an absolute powerhouse in this film. The way he pulls off boiling frustration and anger is just perfect. He’s borderline frightening when he loses his patience and composure. He puts everything into the emotions as a put-upon attorney pushed to his very limit to go against his moral code. He shakes when he shouts and clenches his fists and when poised and dignified he has complete control over the stillness of his body. Stewart is mostly known for his humble idealist characters and his unmistakable voice, but what’s glossed over is how physical of an actor he is, and how that might be his strongest tool. It’s certainly his strongest tool here. (He punches John Wayne and makes it believable, which sounds insane on paper!)

Once again John Ford gets an excellent performance out of John Wayne after collaborating in the The Quiet Man and the western classic called The Searchers. Wayne plays the part of the hardened cynic, wary of the ways of the wild west. He values the gun over the word when it comes down to business. Underneath the hardened exterior is a great level of care for the town of Shinbone and everyone in it, including Stoddard. This brings excellent nuance to Wayne’s role as a grumpy mentor figure and is a great foil to Stewart’s idealism.

Lee Marvin is as imposing and terrifying as Liberty Valance. While he doesn’t get as much screen time as Stewart or Wayne, he makes the most out of every onscreen appearance. He is everything you fear in a criminal: arrogant, sinister, a total psychopath. All characteristics that are illustrated by how he laughs when he’s in control and by his bouts of violent anger when things don’t go his way. And even when he is not onscreen he’s still imposing just by how the people of Shinbone speak of him with fear in their voices.

The supporting cast is excellent as well from the bold love interest Hallie (played by Vera Miles), to the goof of a marshal (played by Andy Devine) to an especially entertaining performance out of the local newspaperman/town drunk Dutton Peabody (played by Edmond O’Brien). The town of Shinbone feels so alive with these colorful characters, and their interactions are so believable and fulfilling.

(The Quiet Man is another prime example of how John Ford makes a community within a film feel alive, and that’s perhaps my favorite aspect of his work)

While the skeleton of the story is one we’ve seen in so many Westerns, “save the town from the outlaws,” it’s in the way The Man Who Shot Liberty Valance approaches the solution to that ordeal, as well as the strength of the characters and the actors that make this film an unforgettable classic from beginning to end.

For more James Stewart, check out It’s a Wonderful Life and Mr. Smith Goes to Washington.

For more John Ford movies starring John Wayne, check out The Searchers and The Quiet Man.