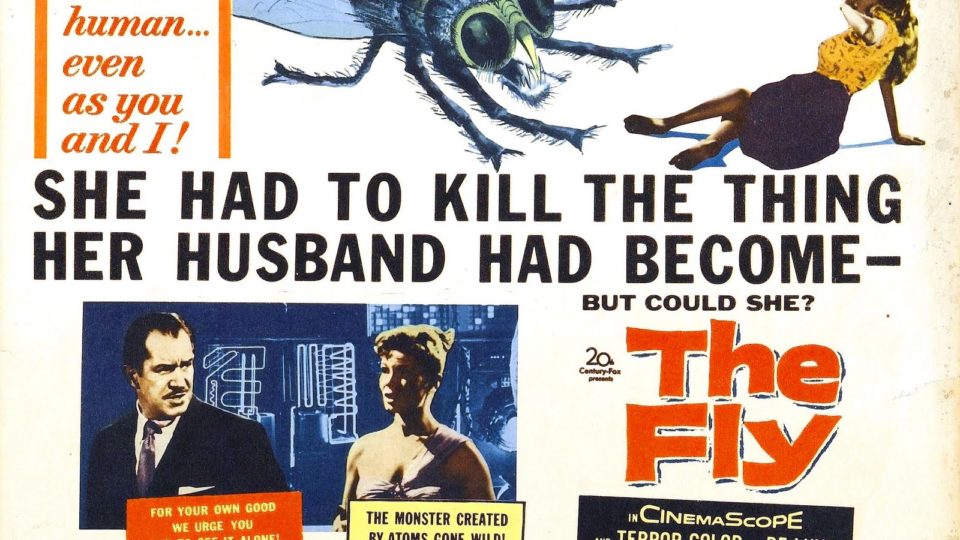 The Fly is a 1958 horror film based off the George Langelaan story of the same name. It tells the tragic tale of a brilliant scientist and an unfortunate incident with a fledgling teleportation machine and a house fly.

We begin with a man named Francois (played by Vincent Price), who receives a phone call from his sister-in-law Helene (played by Patricia Owens), claiming that she killed her husband Andre (played by David Hedison) with a hydraulic press. A confused and distraught Francois gets the police involved whom confine the bizarrely behaving Helene to bed. When she becomes hysterical over a simple house fly, Francois and the police inspector start to question her further, and she tells her full side of the story, and the mystery behind Andre’s death unravels.

The Fly boasts superb performances out of its leads, particularly from Hedison and Owens. Hedison is bold and charismatic as Andre, giving the character life from his flights of fancy to his deep love for his wife and child. His wide eyed idealism and his warm presence around his family makes his descent into his experiments sting more and fill the audience with dread. Owens plays the role of the bedeviled housewife witnessing the birth of the terrifying Fly monster. She plays the emotions of complacent, hysterical, and grieving all very well and certainly does not bring down Hedison and Price. Speaking of Price, this time the horror icon plays a more straight and narrow man who cares deeply for his family. His shock and grief is believable and potent, and he once again delivers a memorable performance.

Where the movie does falter in a few areas is in its script. There are times where the lines are not concise enough to be really believable and feel awkward and take away from the film. For example, at the end of the film the police inspector says “I will not forget what I saw for the rest of my life.” Lines like that would be an easy fix by just trimming a couple of words and restructuring the sentence. On the surface it’s a nitpick but the uncanny valley of human dialogue requires that kind of specific attention to detail to work properly and keep the viewer engrossed.

At the present, The Fly functions best as a tragic science fiction drama rather than horror. While the concept of this feature’s creature is certainly grotesque and even chilling, it has been remade and lampooned left and right that it unfortunately loses its punch, with the exception of one truly unnerving scene at the very end. However, The Fly is more than serviceable for what it was in its time.

Interestingly it shares a key concept in common with The Day the Earth Stood Still, that of bewaring dangerous technology, a legitimate fear of the Cold War years. It’s a remarkably unorthodox cautionary tale against science going too far without being too on the nose like The Day The Earth Stood Still was. In fact, I would say it was among the fleet of films to cleverly modernize the “creature feature” to the frightening nuclear age like Godzilla did four years prior (without the deep societal subtext that Godzilla had beyond the arms race). The film is unforgettable, and frankly deserves its spot in the creature feature hall of fame.

For more Vincent Price, check out House of Wax and House on Haunted Hill.

For more David Hedison, check out Voyage to the Bottom of the Sea and Live and Let Die.