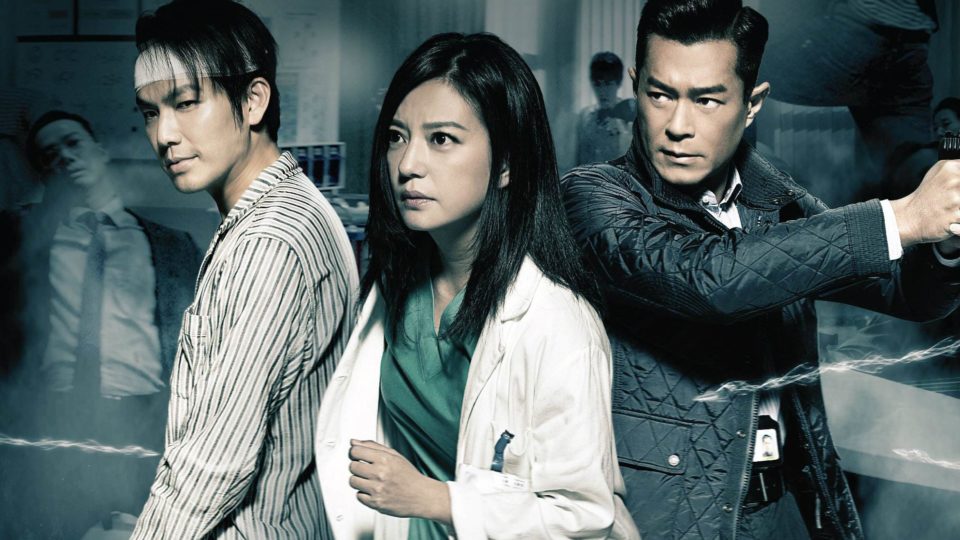 During last semester, I took a course about Chinese movies and was seriously elated and watched movies from directors such as Yimou Zhang, Wang Kar-Wai, etc. I found out some Chinese directors have their unique film style and are influenced from the west, but still create a fusion of the east and the west. I wrote a review of one of the action movies that showed on screen in China during last summer. The film is fast-paced, tough and suspenseful.

Three is a Hong Kong-produced action film from director Johnnie To, starring Zhao Wei, Louis Koo, and Wallace Chung. It is another of To’s gangster movies that is a stylized satire of just and evil. Three shows the central theme- the complexity of human nature- contradictions inside and outside of the three characters, a cop (Louis Koo), a doctor (Zhao Wei) and a criminal (Wallace Chung). The cop who is supposed to arrest the criminal makes a false charge against him in order to protect the other police including himself.

The doctor is an ostensibly devoted doctor keeps failing to do operations as well as assisting the criminal to prove her ability as a doctor.

Lastly, the criminal, who is smart and seems innocent, while he is the most wicked character throughout the movie.

The film is mainly about cops who send a criminal that was shot to the hospital for treatment but he refuses to take them to capture his other companions. It causes the struggles between the doctor who wants to do the operation and the thug who refuses to take it. The cop intends to trap the criminal. It is a fast paced, criminal and suspenseful film that most people might feel hard to keep up with; the film creates a dark and depressed atmosphere.

Individuals who are into suspenseful and drastic films might find this movie a good fit. Wallace Chung’s acting is impressive by creating an erudite, cunning character. He is sometimes mad, calm and fierce. It is hard to act a versatile criminal who knows philosophy, psychology, and criminology so well that he could pick up the lines and attack the doctor or police. (It is similar to the Joker played by Heath Ledger in Batman: The Dark Knight, who is capable of knowledge and criminal techniques.) He seems weak because his right hand is crushed, inversely, he changes into a killer who says, “kill the cop XXX, who gave me a shot” to his gang friend. Three also has its shortages.

Some of the scenes are in contrast to the reality compared with the realness of the other scenes. Such as a scene when the criminals’ gang is shooting people in the hospital that creates chaos, the doctor has time to save a patient who is trying to commit suicide. Other than that, there are some omissions in the plot, which you would feel  that they are unrealistic, or there are better ways to solve the conflict.

Such as a high angle shot and light that is right above a cop’s head to show a strict and nervous atmosphere when cops are ready to find out the thug’s companions. He does not adopt many warm colors except red, and he uses cold color tones: blue, gray, black and white.

The opening operation scene uses an intense red color to emphasize the vividness, which audiences might find too bloody. The setting, character’s clothes are mainly in cold tones. Moreover, the director uses a closed space that is the patient room, which is centered on the nurse table.

The criminal mostly stays on his bed; the conflicts go on and break out in this small space. His characters are both civilian and anti-heroes. The cop speaks out at the beginning of the film, “If the thug were not killed, police would be killed.” Johnnie To also tries something different, which is a slow motion and a long shot of a gunfire scene to highlight the conflict and emotion of every character.

Overall, Three is a good gangster and suspense movie. Don’t expect to find something calm and warm here except fast-paced and strained plots. Johnnie To gives a decent gangster movie that investigates the deeper question of good and evil. If you are a fan of Hong Kong produced gangster movies, check out Johnnie To’s other movies.