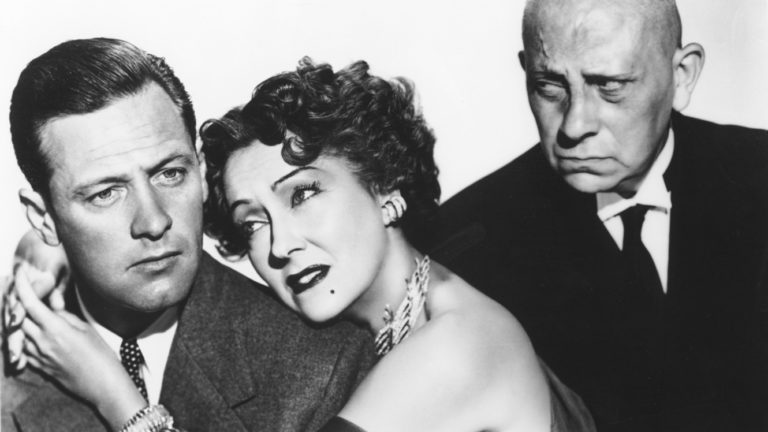 Sunset Boulevard is a beast of a film. It touts remarkable leads and stunning writing for a deep, sometimes cynical, altogether chilling movie experience, truly one of a kind. It is a pure psychological drama, far different from the other two movies we’ve looked at.

Set in the latter end of the Golden Age of Hollywood, the story follows a struggling, down on his luck screenwriter named Joe Gillis (played by William Holden). Unable to find a writing gig and far behind on his finances, Gillis drives out to the hills where he hides his car in an empty garage outside a rather unkempt mansion. Gillis investigates the mansion to find that it is still inhabited by a manservant named Max (played by Erich von Stroheim) and a washed up silent film actress named Norma Desmond (played by Gloria Swanson).

In their first encounter, Gillis and Desmond strike a deal where Gillis works on a screenplay for her supposed comeback picture in exchange for temporary asylum. But as time goes on, it becomes clear that far more is wrong with Norma Desmond than being an aging ditsy actress, and Gillis is digging himself into a hairy situation.

There are two particular elements of sheer excellence that make Sunset Boulevard a great movie: the quality of the writing, and the quality of Gloria Swanson’s acting.

Holden does a swell job as Gillis as he plays a good balance of a young man clinging to his hope and ambition while at the same time bringing out a more brutal cynicism drawn from him over failure after failure. He is a very fine actor and his performance here is no exception.

It is through unbalance, however, that Swanson as Norma Desmond outshines Holden. She speaks with gravitas even when inappropriate. Her facial expressions are overly dramatic to the point of being unnatural. Her empty eyes prove that she does not live in the real world, but rather a surreal, desperate fantasy as her glory days of yore are well and truly gone.

I was left unsure on how to react and how to process her character: should one be repelled by her for her outrageous behavior and manipulation of Gillis, or feel pity for her because her life is so shattered by being made obsolete by Hollywood, her entire life and livelihood? There does not appear to be a truly right answer, even at the end of the film when she pulls off her last big publicity stunt.

In addition, Sunset Boulevard’s writing is absolutely full of rich flavor. You hear it foremost in the dialogue and narration. For example, a single line from Desmond tells the viewer everything they need to know about her.

Prompted by Gillis saying how she used to be “big” in the pictures, Desmond responds with “I am big, it’s the pictures that have gotten small.” In just a couple of seconds the audience sees her conceit and delusion in plain view. That is tight, concise, intelligent writing.

The movie is thematically stacked as well. Writer/director Billy Wilder touches on a wide variety of topics from mental illness to the resentment the older generations can hold against the younger, the loss of ambition, and even a critique of the effects of Hollywood on the young and impressionable. Each subject is given its due time without making the movie feel crammed. There’s just so much food for thought for the audience to think about long after the credits roll.

Sunset Boulevard is a fascinating, haunting, one of a kind film. While revered in its day with its three Academy Awards and critical praise, it is still worthy of the attention of the current day.

For another one of Billy Wilder’s films, check out Some Like It Hot, a classic comedy starring Marilyn Monroe.

For more William Holden, check out Bridge on the River Kwai and The Wild Bunch.