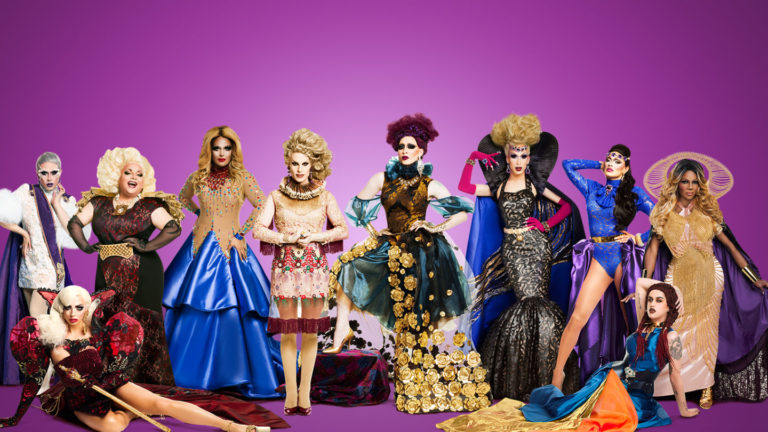 Welcome to my column, Too Glam to Give a Damn. This column will delve into everything makeup and beauty. I pride myself on being an avid lover of everything beauty related: beauty experts, beauty products, beauty queens, drag queens….if it involves makeup I’m probably fairly educated on it. This column will be dedicated to all things glamorous. I will share my thoughts and admiration about various aspects of the beauty community. Hopefully this column will show people that yes—makeup is indeed an impressive form of art.

Today we are reviewing the best TV Show on television, RuPaul’s Drag Race. For those unfortunate few who have never heard of this mystical show, let me give you a little bit of background information.

According to Wikipedia, RuPaul’s Drag Race is “an American reality competition series produced by World of Wonder for Logo TV. The show documents RuPaul in his search for America’s Next Drag Superstar”. So, it isn’t actually about drag racing. It’s about drag queens racing to become America’s Next Drag Superstar and win 100,000 and a shitload of makeup/clothing/a cruise/whatever else depending on the season. Which, in my opinion, is so much better than drag racing. Sorry actual car racing fans.

Last week, RuPaul wrapped up his second All stars season, which takes former queens from other seasons who did not win, and has them compete again to win a spot in the Drag Race Hall of Fame. IT’S SO EXCITING. Words can’t express how hyped I was, and still am, about All Stars season 2.

I probably should elaborate on how this competition works. In regular competition they have 9-14 drag queens enter the competition. This usually involves sending in an audition tape. Once they make it on the show, they compete in various challenges. These challenges can range anywhere from sewing challenges, dress up challenges, fashion challenges, impersonating celebrities….a plethora of talent is showcased during this time. During All Stars, as stated earlier, these are former contestants that are GOOD. Like they slay. Hard.

This seasons round of contestants is impressive, and if you want to read more about them, go here

There were several jaw dropping moments in this season. For instance….

3. Detox voting Alyssa off EVEN THOUGH ROXXXY HAD BEEN IN THE BOTTOM 2 FIVE TIMES AT THIS POINT.

4. Phi Phi O’Hara NOT showing up to the finale recap episode, and RuPaul CALLING HER OUT. ON TV.

Traditionally these kind of settings foster some rivalries and fights due to the high stress of the competition they are put through. I must impress upon everyone: Being a drag queen is extremely difficult and impressive. They transform themselves into women and brand themselves on that. They learn intensive makeup techniques and spend HOURS doing makeup. They lip sync music in front of large crowds and perform difficult choreography to top it all off. They even glue there damn eyebrows down.

This competition has all of that, but to the extreme. These drag queens are the best of the best, competing against each other for a grand prize. There is drama, sass, one liners, humor, acting, modeling, impersonating, and fashion, sometimes all in one episode. If this kind of amazing thing interests you, you can watch all of All Stars here, for free. If you want to watch drag queens perform funny short skits, you can find them here.

I hope this review enlightened everyone about my deep and sincere love for female impersonators. Ironically, these men have taught me so much about makeup and how to be a lady. Please watch RuPaul’s Drag Race All Stars Season 2, it is worth an hour out of your day.