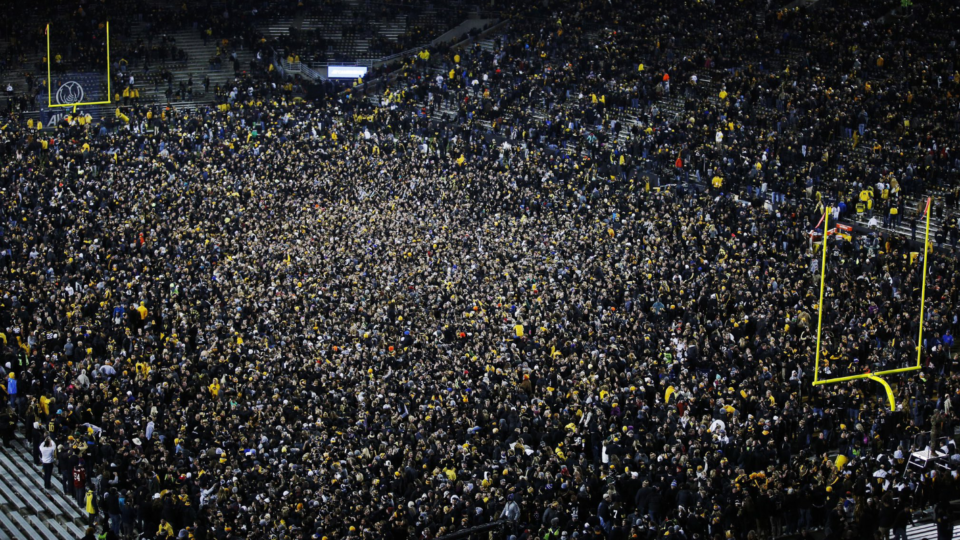 IOWA CITY, IA—Last night the unranked Iowa Hawkeyes (6-4, 4-3) took down the undefeated #3 ranked Michigan Wolverines (9-1, 6-1) on a Keith Duncan game winning field goal. Duncan’s kick sent Kinnick Field into a frenzy; the players piled on Duncan, and the 70,000 fans in attendance were right behind them.

Iowa coach Kirk Ferentz said about the moment, “To have 70,000 of our best friends with us, that was fantastic.”

It was a great night for the Iowa Hawkeyes, and a fantastic night for one Hawkeye in particular, Akrum Wadley. The junior has often been plagued with ball security issues which has led Ferentz to often not trust him in big game situations, that was different last night as he came up with a couple of big plays at the end of the game.

Wadley was visibly giddy during his post-game interview saying how much it meant to him that Ferentz trusted him with the game on the line. “(Ferentz) hugged me! It felt good.”

This game was much needed for Wadley who struggled in his past two games, combining for just 72 yards in those games. Last night Wadley rushed for 116 yards and made the opposing players look foolish while doing it. “Akrum is a slippery guy,” said Ferentz.

While Wadley gave credit to the offensive line for his improvement, he did a lot of the work himself, rushing for 54 yards after contact, and against this Michigan defense, that is no small feat.

Wadley also came up big in the passing game. He had 5 receptions for 52 yards and also had Iowa’s lone touchdown off a screen pass near the end of the half. This is even more impressive when you look at the rest of the passing game, that combined for just 14 yards on 3 receptions. This is nothing new for him as he has tied or lead the team in receptions in each of the last three games (17 catches, 156 yards, two touchdowns).

Wadley was the Iowa offense last night accounting for 168 of Iowa’s 230 offensive yards. Iowa hopes that Wadley can continue to play like this for the rest of this year and next year, too.

“This is a great feeling,” Wadley said about the game. “This will probably top (the Big Ten Championship game).”

Akrum Wadley and the Hawkeyes will try to ride the momentum into Champaign as they take on Illinois next week at 11am.