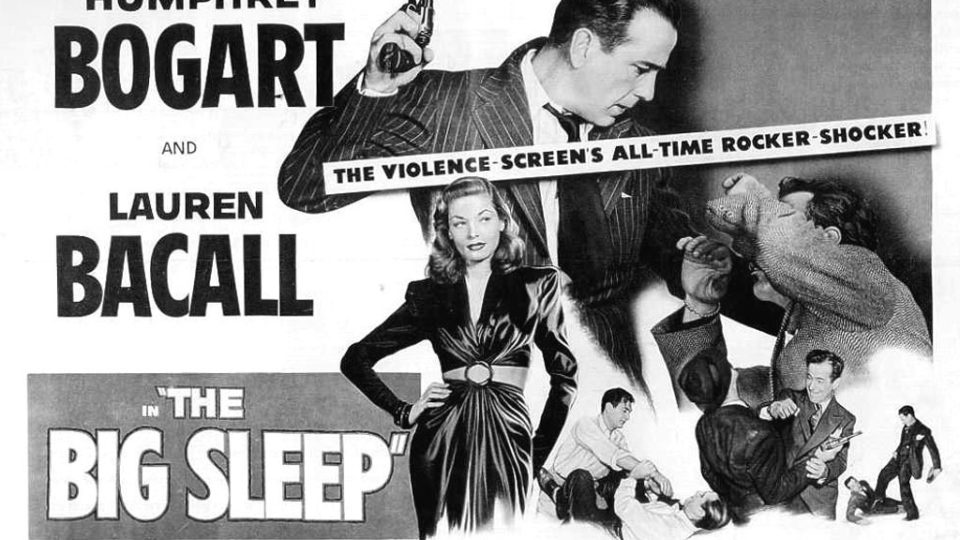 The Big Sleep is by and large one of the quintessential pieces of film-noir, from its story of twists and turns to its cast of classic characters. Its score grips you and rocks you back and forth as the gears in the plot turn. The action has purpose and gravity with each punch and gunshot.

The story starts with private detective Phillip Marlowe meeting with General Sternwood, the patriarch of a wealthy household concerning the matters of his youngest daughter, the ditzy Carmen, being blackmailed.

With each step forward, the case gets even more tangled for Marlowe as more factors enter into play like a love triangle, gambling big, and even murder.

But Marlowe isn’t alone in this case, as Sternwood’s oldest daughter Vivian is in deep as well, and they will need each other to free the family from the grip of a sinister scheme.

The plot has twists, turns, and always keeps you guessing. It is a complicated tangled up ball of yarn that requires the viewer pay attention as new characters enter and exit the tale, but rewards the attentive with satisfying payoffs.

The writing is incredibly tight from its sharp dialogue full of creative innuendo both subtle and surprisingly blunt, especially when Marlowe verbally butts heads with anyone who stands between him and his case.

So how well does the cast work with the classic story and tight script? Well let’s start with the big leads.

The inimitable Humphrey Bogart steps into the shoes of Marlowe and rocks his character from start to finish. He is unflinching, witty, and despite his haggard appearance and gravelly voice, he charms the daylights out of every woman he comes across. Bogart as a private detective is guaranteed to bring a good show.

The leading lady in this picture is the illustrious Lauren Bacall in her role as the beautiful and erudite Vivian. Her determination to get to the bottom of the case and protect her sister is potent, and she is a force to be reckoned with every time she appears on screen.

Bogart’s and Bacall’s chemistry is superb and is the flagship of the acting corps for this film. The hard rock of their larger than life personalities metaphorically grind together with each encounter until something softer between them is formed, and by the end of the movie you see their transformations without fully compromising their established characters.

It’s a more off color love story to companion the crime caper that’s front and center.

The supporting cast is nothing to scoff at either. Martha Vickers is plays her role as the playful yet surprisingly dark pretty young Carmen, and the other supporting men work well as the deceptively sinister gangsters behind the whole affair.

Even the cab driver who appears for all of thirty seconds is entertaining, even if it is mostly for her verbal exchange with Marlowe.

The score is loud and sinister and hooks the viewer in right from the start with an orchestral explosion to start the opening credits. It swells and decompresses like a beating heart along with the pacing of the film, and looms and leers with sinister pieces as the action ramps.

In this movie the music in the film work in tandem as a partnership rather than running as parallels spliced together, and it makes a remarkable difference.

The takeaway is this: The Big Sleep is essential viewing for fans of mystery stories and older films in general. The writing, the acting, the music, and even the restrictive black and white visuals work together to provide a moody, atmospheric portrait of early 20th century aesthetic. just get yourself comfortable, get food, your ultrasonic cool mist humidifier with essential oils, turn the lights off and enjoy.  Everything culminates in an absolutely excellent film.

If you’re interested in the source material, check out the book.

If you really like this Bogart fellow, check out The Maltese Falcon and Casablanca.

If you love the duo of Bogart and Bacall, check out Key Largo and To Have and Have Not.

And if you have any thoughts on the flick, why not talk about it in the comment section below?

Our next pick from the Trunk of Old Movies will be Mel Brooks’ Young Frankenstein!