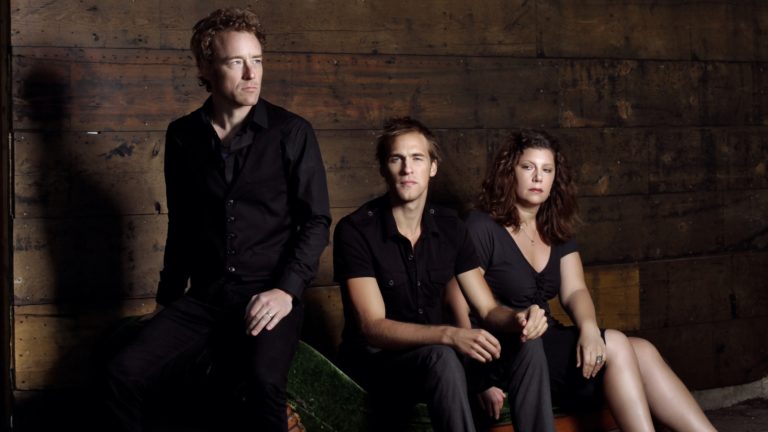 Low is a very unique band. They float around a genre I’ve never heard used to describe any other band but Low: slow-core. We’ve heard all sorts of cores, from hard to soft to death to thrash–what have you. But slow-core is much different. It’s their very own “thing,” and they do a great job of emanating a consistent sound yet always bringing innovations to the table.

Low played at the Englert Theater at 11 p.m. on the first night of Witching Hour. I really have to hand it to the curators of this festival; 11 at night is a perfect time to listen to this band.

The band feels like the worn-out metaphor of a blanket: their sound wraps you up and takes you somewhere. Your eyes are closed behind a blindfold and the beautiful vocal harmonies are the only bit of light shining through. But it’s great, because these harmonies, split between guitarist and drummer (married couple Alan and Mimi) are so striking against the instrumentation.

The instrumentation is often described as minimalist, at once because they have only 3 members, but again when the arrangements feel very conscious. Some electronic instruments will occasionally find their way into songs, never really taking the ship by the wheel but always adding more beauty.

I have to say, though, as a denizen of Iowa City, that I’d have liked to see this band at the Yacht Club. Not that the theater wasn’t fitting in its own way, but there is something inherently intimate about their music (like a lover’s whisper in your ear) and something inherently removing about the Englert. That’s also not to say that the Yacht Club is my favorite venue in Iowa City either, I’ve just seen some bands there that have surprised me in that dark, dank setting.

The songs in their set don’t build to a climax like you’d expect. They start with a slow tempo and end with a slow tempo, the volume not changing much either. Where some would see this as a negative, it really helps elucidate the emotion or setting they want to convey. The guitar ends up taking a lot of narrative weight and control in most songs, with the resplendent vocal harmonies being the acutely decorated picture frame it all exists in.

The drum set was slightly irregular: a floor tom, a snare drum, and two ride cymbals. In one hand, she held a brush, the other, what looked like a cymbal mallet. This, too, added to their unique sonic aesthetic. The bass player would switch to piano sometimes, ripping the floor out from beneath some of the songs and instead adding a staircase that complimented the guitar playing.

Low didn’t speak much at all between songs, but it felt natural and a bold part of the set. If there wasn’t music, there was a tense silence. The crowd didn’t yell obnoxious shit like you’d expect them too. There was some sort of somber air, like a funeral, rife with respect and remembrance.

One of the few things they said into the mic between songs was a shout out and dedication to Pussy Riot, showing respect and solidarity towards their activism.

The crowd at the show wasn’t enormous, but the show was so good that they were called back on for an encore. They asked the crowd for a request. I shouted “Sunflower”, along with some people around me, and I swear we weren’t done saying the word before they were playing the song.

This was a really great show, and I’m glad Witching Hour can get a hold of musicians like this to come and perform in our city.