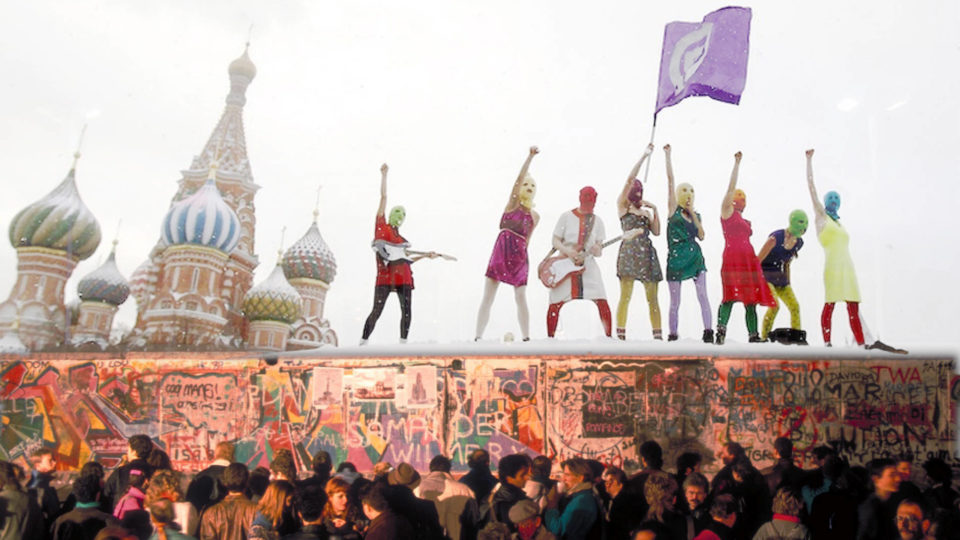 Everybody has been talking about it. Pussy Riot. That’s right–say it. Pussy.

The discussion started with a small part of a 2 hour documentary about Pussy Riot and how they connect with the long history of protest art. It also shows their ideological drift towards feminism, and how they became a female-only group. The film was called Act & Punishment, and the 13 minute clip was made by the director specifically for this event.

If you can find the film, I recommend watching it. It’s a comprehensive history of Pussy Riot and it displays them in the light they deserve.

The first question, given by “moderator” Jessica Hopper, was directed towards Maria. She asked her about her first introduction to protest art, or how that kind of performance became something she was interested in, to which Maria replied: “I’ve never been a serious person.” Although most of the topics discussed were quite serious, there were many moments of laughter as well–a perfect portrait of the complex political aesthetic of Pussy Riot.

She went on to talk about her time before Pussy Riot, when she engaged in what she called “classical activism.” Maria was working to save a forest in Russia, and spent her time gathering signatures and organizing demonstrations.

Now she is doing a different kind of performance: theater. Maria is now involved in a “very underground” theater group, acting out a play she helped write that depicts her time in prison, the raw harshness of her experience in Russian jail, along with the story of another political prisoner in Russia. This is meant to show that Pussy Riot aren’t the only ones in Russia using art to protest the patriarchy–it is a movement.

The experience of Russian prison was a hot topic during the discussion. “For me, its not finished,” said Maria, indicating that even though she was released, these events are going to stick with her forever.

The first question directed towards Sasha was about the current state of anti-Putinist art in Russia. Although she is more of a journalist than a performance artist, Sasha, who is still quite young to be doing what she is doing, had some wisdom for us: “There are many ways and forms of activism.”

Sasha is a journalist for MediaZona, an independent news outlet in Russia founded by the members of Pussy Riot. The state of the media in Russia right now is not too different form how it has always been: the state media gets all the money from the government and big corporations, while independent outlets are left to fend for themselves, choosing justice and activism over a profit or merger with state media.

Right now, almost all of the articles written by MediaZona are in Russian. They have collaborated with a few English news outlets, like the Guardian, to have some of the especially important articles translated, and are looking to have more translated in the future. The larger the audience, the better.

One of the main ideas behind this news outlet is exposure. According to Maria, if you have public attention, you are safe–they won’t kill you at least. For Pussy Riot, they became an international sensation right away, and the whole of the world had their eyes on them. This kept them from being tortured or killed by Russian authorities. Unfortunately, there are many political prisoners in Russia, and they’re not all lucky enough to have the kind of attention Pussy Riot did. So, if they can cover these stories on a big outlet, it will hopefully keep them safe.

And so far, it’s been going well. MediaZona has risen to the 7th most popular news source in Russia, which Alexander compared to a “student newspaper in Iowa competing with New York Times.”

Jessica asked Sasha what is was like working as a journalist in Russia, and despite the dangers, she answered with a laugh: “It’s pretty fun.” She has been working for the outlet for about a year, about half as long as its been around.

The next topic was feminism in Russia. Everyone on the panel agreed that Russia was late to feminist ideology, most likely because there were not a lot (if any at all) women politicians for young girls to look up to in Russia. If there were, they weren’t feminists. Maria said this extends from the way Stalin ran the country, halting any and all feminist movements or ideas before they took hold.

Maria explained that she was exposed to feminism while she was 18 and pregnant. The endless barrage of anti-abortion propaganda all over Russia got her thinking about the rights she had and the rights she deserved.

Near the end of the conversation, Jessica asked the panel how they felt about the American election. Everybody laughed.

After the discussion, MediaZona shirts were being sold, with that being one of their only sources of income, because no one in Russia wants to give them money. Iowa City was a good crowd for this; they sold out of shirts.

All the members of the panel were standing around the shirts after the discussion taking pictures, signing autographs, and discussing more ideas. I spoke with Maria for a bit about the future of Pussy Riot, and how they will be seen from the future.

The girls in Pussy Riot don’t want to be icons. Role models, sure, maybe. But they insisted on the fact that they are just people, doing things that most people could do if they just did it.

I also got to talk to Sasha a little more in-depth about the current state of media in Russia. I told her I was a journalist as well, but our experiences writing were probably vastly different. She reiterated many of the points made in the discussion: state media has the money and the power, and that makes it tough for independent media platforms. “Sometimes, its really scary to work for independent media in Russia,” she concluded. I can only imagine.

Iowa City is very lucky to have an event like Witching Hour to bring in events like this. Not only was Pussy Riot met with support and attention from the audience, but the audience got the chance to learn a lot about new and different perspectives from different places on earth. The whole night was illuminating and very entertaining.

If you want to see what the rest of Pussy Riot is up to these days, check out Nadya’s music videos. She’s continuing in the vein of music, while the others seek more journalistic means of activism.