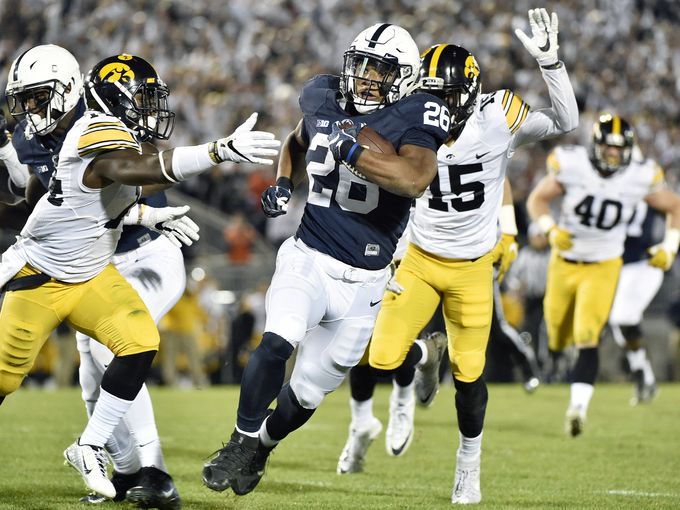 STATE COLLEGE, Pa. – Man, where do I start? I guess we could start with Penn State (7-2, 5-2) taking their first offensive possession down the field 52 yards on six plays that was capped off by a 19-yard touchdown pass from sophomore quarterback Trace McSorley to junior wide receiver Saeed Blacknall that put the Nittany Lions up 7-0 and sent Beaver Stadium into a frenzy.

On Iowa’s first possession, the Hawkeyes (5-4, 3-3) managed to drive the ball 40 yards, before turning the ball over on downs after failing to pick up a 4th– and 1. Senior quarterback CJ Beathard tried to leap over the line of scrimmage but had no chance and was stuffed two yards behind the line of scrimmage.

This seemed to be the story of the game for the Hawkeyes.

Before the Iowa could blink, they trailed 21-0 with an offense that was lifeless and a defense that couldn’t wrap up.

Penn State’s sophomore running back Saquan Barkley tooled with the Hawkeye defense all night, rushing for 167 yards and a touchdown. Barkley was part of a Nittany Lion offense that racked up 599 yards of offense against the Hawkeye defense.

Iowa junior running back Akrum Wadley scored on a 12-yard reception from Beathard to bring the Hawkeyes within 21-7. But that’s as close as the Hawkeyes got. Penn State put up 17 points in the second quarter and another 14 in the fourth to steam roll the Hawkeyes 41-14.

“I thought we would come in here (Beaver Stadium) and compete well,” Ferentz said. “ We didn’t get it done. We fell well short.”

While the Hawkeye defense didn’t have it’s best day, you could argue the Iowa offense set them up for failure. The Hawkeye offense converted only two third downs all-day and only produced 234 yards and two scores.

“I thought we were as ready as we have ever been in the locker room before hand,” Beathard said. “It’s just sometimes things don’t play out how you would expect.”

The common theme in the post game interview session with the Hawkeyes was that the team was prepared, and expected to compete tonight. Somehow, someway, that didn’t translate from the locker room to the natural grass in Beaver Stadium. Whatever the issue is, they better figure it out, as the Hawks host undefeated Michigan Saturday. A team that crushed Maryland 59-3 today.