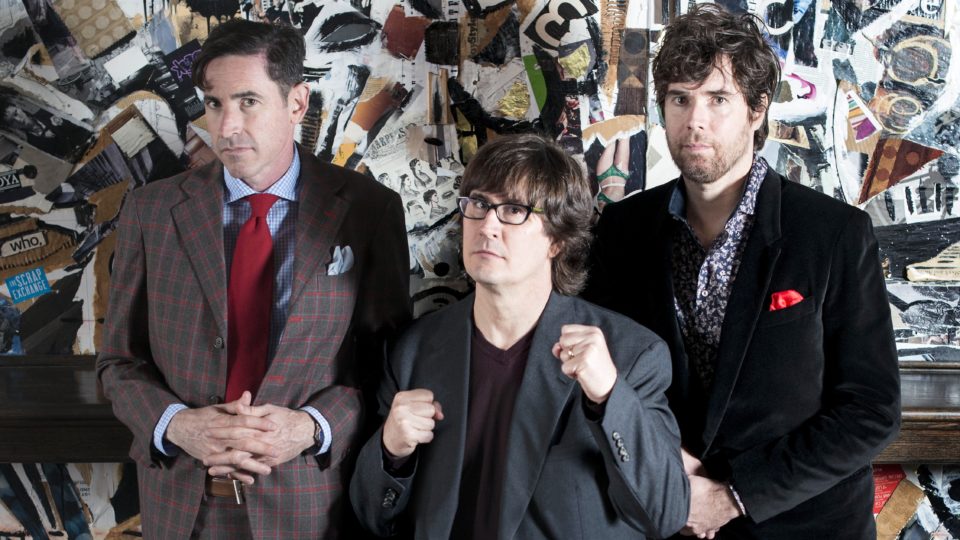 Southern California indie folk trio The Mountain Goats came to The Englert on Monday night on their “We Who Walk Between the Roads” tour, attracting a large crowd, young and old, of devoted fans and casual listeners alike. Australian indie-pop group, Oh Pep!, opened for the group, and the end result was a charming, comedic, and intimate affair for everyone in attendance.

I was rather unfamiliar with The Mountain Goats before I attended the show, having only listened to their 2002 album All Hail West Texas, as well as half of their last album Beat the Champ from last year in an attempt to quickly familiarize myself with the group before the show.

As I walked through the doors to my seat, the opener, Oh Pep!, took the stage and filled the room with lovely pop tunes that more-often-than-not erred on the side of alt-country. The four-piece, comprised of a bassist, percussionist, mandolinist/violinist, and guitarist with the latter two performing vocal duties, performed forty minutes of mainly acoustic-based songs. The set contained either up-tempo rockers or slower and more intimate ballads. Other than intonation issues with the vocalists and a few minor sound problems, the group put on a mad decent show.

The stand-out performer of the group was the mandolinist/violinist, Peppita Emmerichs, who brought unique contributions to the band’s material. She added something interesting to the equation on every song: staccato violin melodies, mandolin rockouts, and, my favorite of the night, slide mandolin solos. A few songs into the set, the group introduced themselves and talked about how it was their first time playing in Iowa city, and other stage banter involved the background of some of their songs and their friendship with one another.

Although I was unenthusiastic from the beginning, the set improved as their time on stage went on, and the last few songs they played had some lively buildups that had my foot tapping by the end of it. Oh Pep! proved themselves to be a lovely warm-up to The Mountain Goats and the audience agreed through their applause, but The Goats themselves took Monday night’s event to another level.

Twenty minutes after Oh Pep! left the stage, the lights went out and a game show-esque theme began to play.

One-by-one, the members of The Mountain Goats entered the stage, last-but-not-least frontman John Darnielle. The group performed as a four-piece as well, and mainly performed acoustic-based songs but a decent amount of the set also consisted of songs with more lavish instrumentation, including saxophone and keyboards. Most of the set featured up-tempo tracks from the band’s latest album paired with Darnielle’s passionate vocal performances, a highlight of The Goats’ set. Darnielle often quipped about professional wrestling (the subject of their previous album) before performing, which gave myself and the rest of the audience quite a laugh. However, the best part of the show was when the other band members left the stage, leaving Darnielle performing solo.

Although it was their first time performing at The Englert, Darnielle shouted “it’s good to be back!” in-between the first two songs, and when he was alone on stage, Darnielle elaborated on his personal history involving Iowa.

Before introducing the songs he played solo, John Darnielle described, at length, his time living in Iowa. He shared stories of his trips to Hy-Vee for party dip, and his unfortunate time working at a grain elevator. More-interestingly he talked about how he recorded a series of Mountain Goats albums in and around Iowa from his boombox, namely, Ames and Grinnell. Myself and the audience reacted to his stories with empathy (the audience groaned when he began telling his grain elevator story) and laughter which gave the entire performance as a whole more of an emotional significance than other shows that I have been to.

The intimacy of Darnielle sharing his life experiences in Iowa created a deeper connection between him and the audience, and made the performance that much more special to all attendees.

After the band rejoined Darnielle on stage, the band finished out their set while again talking a little bit more about Iowa, as well as Darnielle’s usual remarks about pro-wrestling. After the band left the stage, the audience stood up and cheered for an encore, and two minutes later, The Mountain Goats reemerged from the sides of the stage, playing a stellar five-song encore that included the best full-band performances of the entire set, particularly the track “Blood Capsules.” The encore saw the audience at their most lively, with a good amount of the audience moving to the rhythm and some even straight-up dancing to the songs outside of their seats. The audience rose and applauded once more when The Mountain Goats left the stage for the final time, bringing the show to a close as the house lights illuminated the theater. The Mountain Goats may be gone for now, but the atmosphere and emotions that the group brought to Iowa City on Monday night will stay with the audience members for years to come.

You can find The Mountain Goats’ website here and Oh Pep!’s website here. If you missed the show on Monday, you can make a quick trip to their show in Maquoketa on the third of October!

Upcoming events at The Englert