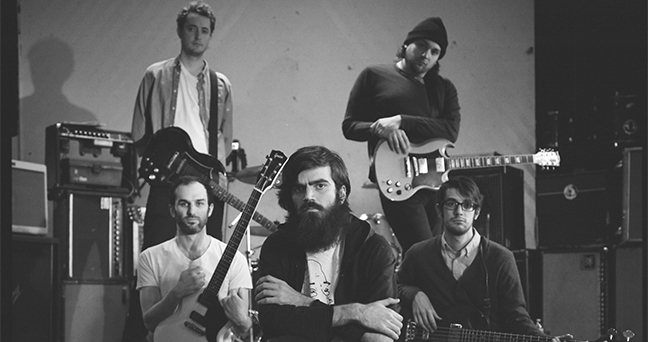 Titus Andronicus packed the Mill on a Sunday night, drawing a large crowd in a small venue, and no doubt leaving everybody there energized and satisfied. They came through Iowa City with the opening band, A Giant Dog, on their Rockers on the Road tour, which takes them all around the country before landing back on their native east coast.

Shows at the Mill are much different than shows at any other venue in Iowa City, and even the singer/songwriter of the Titus Andronicus knew it, making sure everyone knew that we were rocking out in a “fancy restaurant,” and to be careful with our moshing and dancing. Seeing bands like these at a venue like this really lets you appreciate everything that happens on stage; everyone is so close to the band and the band can interact and react in a way that they couldn’t at other venues.

Before the music began, the first thing to take the stage was a large, inflatable dragon, which stared at the few people standing around with bright red eyes; an ample omen for the absolute power we were about to experience at our local pizza place.

A Giant Dog is a rock band from Austin, Texas. Their sound was reminiscent of Titus’, if that sound had traveled south for the winter and decided to stay. The crowd was not yet in its final form when the band began, but they brought so much energy and power to the stage that everyone was into it from the very start. You could tell this band was an explosion; the feelings came in bursts, with songs starting quickly and ending abruptly, each one disclosing more rawness than the last, each one bringing out more dancing from both the band and the crowd.

Their music was like a party and punch in the face at the same time. They even sang a song about the gun laws in their home state, which allow open carry. Whether or not the subject and content of the song was serious, this band was having a good time on stage. Check out one of their music videos below!

Next up was the headliner, Titus Andronicus. By this time, the crowd was filling out. A bartender said that there were over 100 pre-sale tickets, with another 100 expected. It seemed a large number, and probably not all that true, but the numbers didn’t matter once the band took the stage.

Titus Andonicus in endless; their music sounds like punk ethics injected into the infinite ether of human emotion. Listening to them on record doesn’t do them justice: this group in meant to be experienced live.

Once it all kicked in, the crowd was jumping and singing along to some of their more popular lyrics, and even had the band stepping away from the microphone a few times to allow the crowd their due part in the experience of a rock show.

Most of the songs ran directly into the next one, a lot like their albums, which feature long pieces that tie in to the next one to create a wholesome impression in the listener. The sea of dimly lit heads bobbed and bounced to each one, the perfect reaction to the relentless onslaught of sound.

Patrick, the lead singer, lead the band through every song with his voice, which had the effect of a searing electric guitar or an extra snare drum, blending in perfectly with the high-gain instruments that backed him up.

In one of the rare moments between songs, Patrick took the time to talk about how much he liked Iowa, and the fact that the band had been here a few times before, playing at both the Mill and Gabe’s. While on the subject of Iowa, Patrick even mentioned our important role in the electoral college, and encouraged us all to go out and exercise our right to vote this November.

Near the end, they announced that there are only a few songs left, as the show was all ages and had to end by 10. While it sounded like a bummer, it was cool that teenagers could come to the show and hang out like everyone else. The band thanked the Mill for being inclusive and respectful to everyone.

Titus Andronicus ended with their song “A More Perfect Union”, the opener off of their album The Monitor. The crowd was singing along so loudly that there were moments it was louder than the band.

After the show, I asked Patrick what felt better or more natural to the group: being on stage or being in the studio.

He concluded by saying that the concert was much more important than the record, even though they both have their important places within Titus Andronicus.

You can find their website here, which has news, tour dates, videos and more. Their music is also available on Spotify. A Giant Dog can be found here.