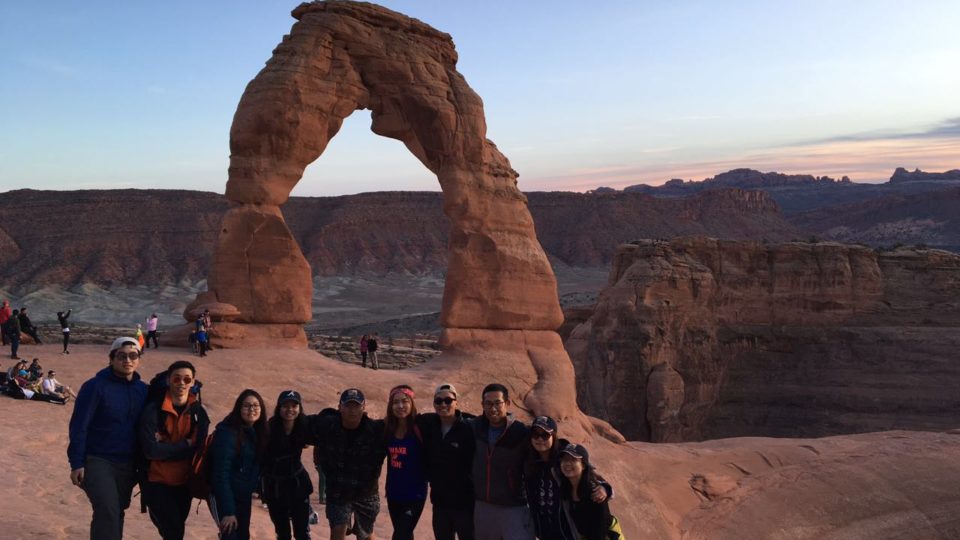 The previous article “Travel Around the World: Spring break Hiking Trip Part 1” is on Grand Canyon’s bright angel trail and South Kabab trail. I am moving on to the rest of our hiking trip to Zion National Park and Arches National Park; we also passed by Marble Canyon and Bryan National Park. Get prepared and don’t be shocked of how much we conquered during our trip.

March 17th: Grand Canyon- Marble Canyon-Zion
We got up around 9 am, packed and headed straight to cross the border from Arizona to Utah. We were on a steep highway, and the view was extraordinary. You can take a symmetrical picture with the blue sky and the red rock mountain on the side inside your car. Also, you can also go on a road trip through Grand Canyon, Marble Canyon to Zion National Park.

On the two hour trip, we made a stop at the Navajo Bridge crossing the Colorado River. There was a huge contrast between the modern bridge and the rough mountain. Our three girls just could not stop taking pictures and ran around like crazy. Around 12 pm, we arrived at Zion National Park. We were worried if we could not find a site since the reservations were always booked out. (A tip here is to make a reservation three months ahead of time, and then you are guaranteed for your spot.)We luckily got two spots, and there was phone signal. That signal seems important for the outdoor beginner like us.

Hidden Canyon:
It was late afternoon, and we were finally ready for another hike. We took a shuttle to go up to the mountain. We got to the trailhead of Weeping Rock, which is a readily available tourist attraction. We were expected to climb for an hour, but it was a short trip, and we climbed to a dead-end after ten minutes. Weeping rock is simply the water descending from the sandstone, which looks like a small fountain.

Then our leader led us to a more challenging route-the Hidden Canyon after going back to the trailhead. It is roughly 3 miles total and 1000-ft elevation which is strenuous. At the beginning of the trail is fun. It is uphill switchbacks that are pretty narrow, but you can climb by holding the chain on the side.

After a five-minute climb, the route that we can walk ended; we faced huge rocks and log. Our leader was bit concerned and said we might not finish the trail since it was getting dark, but he seemed to want us to try the trail because it looks like the real rock climbing. Some people in our team are a big fan of indoor rock climbing (the one in the Campus Recreation Center), they could not hold back and climbed up on the stone.

I was scared by the first obstacle- the stacked rocks. There was a stand on the first rock, but then between the second and the third rock, only small support points that you have to use your leg strength to stand on and move on to the top rock. I failed the first time and then made it. There were other difficult parts. Such as to slide down a couple of occasions from a higher point to the end from a rock or walk on a cliff that you would rather jump than walk. The view is plain, but the whole process of hiking up and down through the obstacles is challenging and fun. Someone in our group joked that it is the real hiking.

Before we started to hike, our leader discussed the Angel’s landing’s steepness with us. He explained that it looks like an 180-degree elevator. It is roughly 1500 feet steep, and it takes 3-6hours round trips. Angel’s Landing was my favorite hike during our journey when you accomplished the hiking straight up and saw the view from the top of the mountain. There was a fifteen minutes walk that was switchbacks like S shape before the trailhead of Angel’s Landing.

It was not even the trailhead of Angel’s landing. When I looked up to the top of the mountain, people were climbing up, and it looked like they were going to fall since it was so steep. There was stacked rocks put near the trailhead, which was used as a sign for hikers to know they are on a right track. The climbing gave me a different feeling than climbing in Grand Canyon. The surrounding view was brutal- the sharp red stone and no stairs for hikers. At the last part of the trail, the trail was becoming more and more narrow. Some people hiked down were waiting for us to hike up; they even cheer up for us: you are almost there. When we finished and rested sitting by the edge of the mountain and taking pictures, we saw there were people on the opposite of the mountain doing rock climbing. Oh my goodness how can they do that. When you finished the angel’s landing, you would admire the professional rock climbers. On our way to hike down, our team became more united as a team. We helped each other when there was no chain. There were other climbers that brought a music player playing some cheesy pop song like Gangnang style and jumped down the stairs or rocks.

The way to go down was more fun and hilarious. One funny clip, one member of our team had something bad at breakfast, and he kept going to the bathroom. Because there was only one bathroom before the trailhead of Angel’s landing. Whenever he went down to the switchback and felt uncomfortable in his stomach, he had to climb to the bathroom and came down back and forth.

The next day, we went to a nice café for breakfast. It is a French style café, and we had fancy crepes or omelets. We all felt moved that this was the best breakfast during our trip besides having the tortilla with jam, or trail mix, etc.

Later we headed to Bryce Canyon. Because there was still snow on the trail, we decided to drive up to the sunset point to see the overview of Bryce Canyon. Below the point, there were thousands of hoodoos and forests in between. Bryce Canyon looks much lower and flat than Zion or Grand Canyon, but it is quite magnificent. If you heard of the Terra Cotta Warriors (buried with the first emperor of the Qin dynasty) that is located in Xian, China, they look quite similar in the size.

After the short view in Bryce Canyon, we were heading to our final hike- Arches National Park. We were determined to do the 3 miles hike and see the sunset. The driving tour already led us to see a lot of arches. Different rocks formed into the open or closing arch. The trail started with the flat route and turned into a huge slab, and we could not see the dedicated arch at this point. Slowly climbing and there were the dedicated arch and some other large stones. We were spread out and take pictures when under the sunset. A guy threw his bottle of water down the slope, and it continued to bump the rock and went down. Some people just chilled and laughed about his action of throwing it. I couldn’t remember our conversation down at the dedicated arch; I only remembered we were excited about the good retreat- food for our five-day hikes. We had nice dinner at an American restaurant in Moab. The burger, fries and sausage was what we were missing during the trip.

We spent two nights at the Watchman campground at Zion. Since we got to the camping site late, we occupied two sites; one was by the river, and the other one was by the parking area. It was not hot because we were near the river and we stayed at the bottom where we had a nice view of the surrounding mountains. At night, we did camp fire by the river.

At the first night, we were tired after the challenging hidden canyon hike, so we decided to have some beers and snacks. Our leader, the chef, started to do a dessert, which is a remix of sliced banana, marshmallows, and chocolates, and he wrapped it up in tinfoil.

The roast banana tasted just right. After that, we decided to do some photoshoots by using cellphones’ light to draw letters quickly. The long exposure time created cool delay pictures of our names we wrote.

The second night was quite unforgettable because we talked about our feeling as a team to make the hiking trip. I remembered one girl mentioned that she would never expect we got along well, and we enjoyed outdoors and also cared each others as a team. I was quite surprised that though our two leaders have never led a team before, but they were capable of making routes, cheering up and leading a fun trip. The small talk went on and switched to joke and gossip. I felt like the hiking trip was one of my field trips in high school that I want to explore again.

Checkout my next column on a different location and more fun stories!