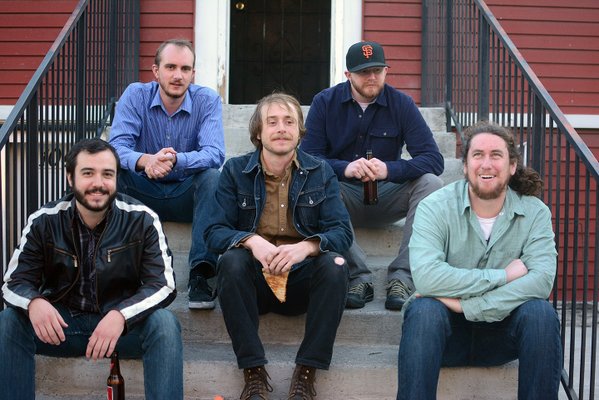 Most people I meet don’t know much about Reno, Nevada. Maybe that it’s the other place in Nevada where you can gamble, or that it used to be the divorce capital of the United States. What most people will tell you though, is that it can be grimy, dirty, funky, and more than a little weird. As a guy who lived there for five years, I can tell you it is all those things and more, in the best of ways. And bubbling up from that formula comes a suprisingly impressive and diverse music scene.

Representing all of the funk, soul, and stank of Reno is the self proclaimed garage rock and soul band Failure Machine. The band is helmed by Spencer Kilpatrick on guitar and vocals, Clint Philbin on drums, Zac Curtis on trumpet, Harry Mahony on saxophone, and Robbie Lynn on bass. After releasing two EPs and spending the last few years touring the great American West, the young band, known as Failure Machine, has finally settled down and released a premiere album: “Boy.”

Boy only has six tracks, but it does not take long for the energy level to get pumped up well past eleven. “Beautiful Scene” opens with a somber guitar lick and solo vocals from Kilpatrick, but gets going once the drums really kick in and the winds start playing. As an opening track, it sells me instantly. It’s quick and boasts good, catchy riffs while simultaneously bringing out the dirtiness that you would expect from any garage band. “Beautiful Scene” begins the showcase that is Kilpatrick’s voice, and lets the rest of the band back him up in an effective way.

The pace gets picked up with “Lonely”, another appropriate title you would expect from any band branding themselves as a soul group. Focused on a driving rock beat and a bass that keeps the tempo up, the track yet again shows off Kilpatrick’s singing while giving the horns a little more to do. “Lonely” also makes sure to have its fun and get out of the way. The track doesn’t overstay its welcome and is over before any of the repeating lyrics, rhythms, or riffs become stale.

The next track, “Secrets” is very similar to “Lonely.” It’s quick, fast, fun, and the winds sound like they have just the right amount of grime in them to keep them sounding authentic. However, after these two tracks, I’m really hoping for a slow down into more soulful territory.

The last three tracks deliver on that pitch, and almost too much so. “Kiss or Kill me,” “Innocent,” and “Too Late” all take a more tuned down approach, and overall, it is to the album’s benefit. However, I wish they had placed one of the first three tracks in here to mix it up a bit.

The whole album feels almost frenetic with energy in the first half, and by comparison, the back half almost loses it. That being said, the last three tunes are each still worth a listen and hold their own in terms of musicality, technique, and enjoyability.

“Kiss or Kill Me” is a mournful love song with a surprisingly powerful bridge section featuring the saxophone and trumpet that really differentiates it from the rest of the songs on the album. The vocals and guitar remain as on point as ever, but this track belongs to Mahony and Curtis on the sax and trumpet. “Innocent” is a duet piece with an accompanying female vocalist, which propels it to a very impassioned place. It easily takes the most soulful and touching spot in the six songs, and remains memorable because of it.

The album ends with “Too Late,” a somewhat fitting title to me, as I thought the song tries to bring some of the previous energy, perhaps a little bit too late (sorry). Or that’s what I thought. The chorus-powered ending to the song, along with the rousing horn lines and howling vocals provide a very different kind of intensity–a positive one. “Too Late” helps to cement Failure Machine as a definite soul band, while letting them stretch their musical legs into some more uplifting territory.

Not bad, not bad at all. Failure Machine is able to capture sounds of rock, soul, and even a little R & B while putting their own grungy Reno sound into it. The album is short at only six tracks, but I will be keeping my eye out for any more that Failure Machine puts out.