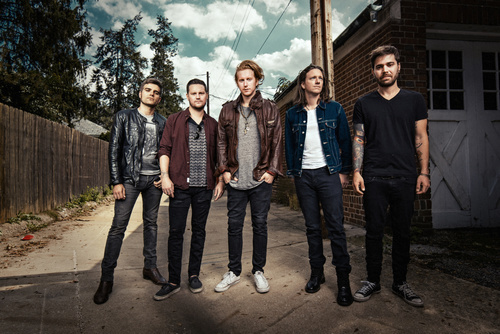 When I first heard that We The Kings were coming to Iowa City, the inner middle schooler in me freaked out. Back in the day, “Check Yes Juliet” was the ultimate jam. The lyrics were used for Facebook statuses and quotes on our edited pictures. I had the chance the see them at Warped Tour 2014, but only briefly so when the opportunity to see them again came up, I couldn’t pass it up.

My best friend Taylor drove down from Dubuque to go with me. After enjoying a nutritious dinner at Teddy’s (highly recommend), we made our way to the venue. They were playing at the Blue Moose Tap House, a venue in Iowa City where I’ve seen other great bands like Mayday Parade and The Color Morale. We arrived around 6:30, right before the show started. We stood near the back as the place was almost full–but not too cramped.

The first band to come out was Brother James, a side project of some of the dudes from We The Kings. They came out played a couple songs which really got the crowd moving and people pumped up for the bands coming up. They played a cover of “Wonderwall” by Oasis, a crowd favorite. Dozens of cell phones flew into the air to record one of the best hits from the 1990s.

Up next was She Is We, a band from Manhattan, formerly called He Is We up until 2012. She Is We is a band that mixes elements of indie, pop, and rock into their catchy songs. The crowd knew some of their songs and swayed their hips even if they didn’t.

The lead singer Rachel Taylor occasionally stopped between some songs to talk and share her struggle and also get the crowd moving. The songs performed, all of which came from their debut album “War” released March 18th, 2016, all dealt with themes of karma, strength, believing in yourself, self loathing, and battling the war within ourselves. Their set list included, Monster, Blue, War, Flatlining, Boomerang, and ended with the powerful anthem Lead The Fight On.

Next was a band called AJR, a band consisting of three brothers based out of New York City. To be honest, I didn’t know that they were coming to the show, nor did I know who they were. She Is We were doing a meet and greet during AJR’s set, and Taylor and I decided to go chat with them.

From the bar area of Blue Moose, their set sounded exuberant and rowdy. After we got a picture with She Is We, we headed back to the stage area and caught AJR’s most popular single “I’m Ready,” their single that was on rotation on Sirius XM Radio’s Top 20 on 20. The crowd danced, clapped their hands, and belted the words back at the guys.

Finally, after hanging out in the back and talking to some people around us, We The Kings ran on stage. We The Kings are a pop punk/alternative rock band from Bradenton, Florida. They opened with the song Skyway Avenue, and immediately the crowd started dancing and jumping around. Lights flashed all over the stage, ranging from blues and purples to reds and whites. Not a soul in the room was still throughout their set, whether the people were full on head-banging and crowd surfing or slightly nodding their heads and swaying their hips.

We The Kings covered two songs: Coldplay’s “Fix You” and Jimmy Eat World’s “The Middle,” both songs from the early 2000’s that the crowd soaked up.

One thing WTK was very good at was getting the crowd involved. During their song “I Feel Alive,” lead singer Travis Clark got the crowd to sink down to what he called the “sorority pose.” When they broke into the chorus, the crowd jumped as high as they could and waved their hands in the air. It was such an entertaining and everlasting moment that made me feel infinite.

Travis Clark was vocal; not only in his music, but in his stage presence as well. He talked a lot between songs, which was enjoyable to listen to at first, and quickly became too long as he was talking longer and longer after each song. He first talked about their next song called Secret Valentine, which he used a humorous sexual innuendo to describe what it was about (“Let me tell you about my first time ever playing tetris. . .”).

After that came the lull of the show, with slower songs “Just Keep Breathing,” “Jenny’s Song,” “Runaway,” and “Sad Song.” Travis Clark also talked a lot in between these songs, making the lull seem even longer. The songs were enjoyable to listen to, but by the time they got to “Sad Song,” the crowd was aching for some upbeat songs. Don’t get me wrong, these slower songs are all beautiful, but they dragged on for too long.

They picked it back up with their latest single “The Story Of Tonight”, and filmed the crowd for their upcoming music video montage of this tour. “Say You Like Me” was up next–another crowd favorite. The lights dimmed, and once they came back up, the band said their goodbyes before breaking into the long awaited “Check Yes Juliet.” Fans screamed and I’m not gonna lie, middle school Jen was freaking out.

The guitars faded out and Travis declared “We are We The Kings, and we’ll see you next time Iowa City!” before the lights dimmed and they stomped off stage from yet another epic concert.

Click here to listen to a playlist of their setlist on Spotify!

Click here to watch some of the footage I took from the concert!