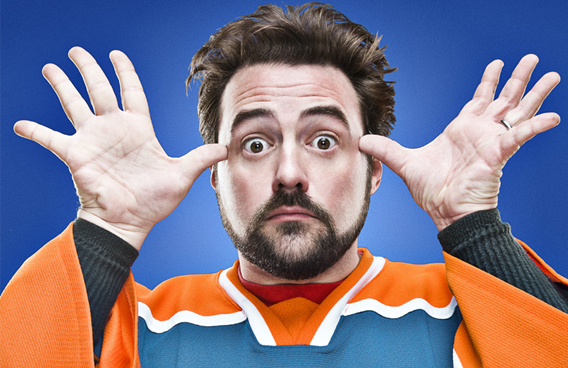 To those familiar with his work, Kevin Smith is a legend. It is no wonder that tickets to his Q&A quickly sold out when he came to Mission Creek Festival this Saturday night. The line to get into the Englert Theatre extended well past the pedestrian mall in the hours leading to Mr. Smith’s appearance. His most avid fans buzzed with excitement that only built as they took their seats and made frequent trips to the well-stocked Englert Bar. The crowd was a well mixed melting pot full of fans of all ages and walks of life, a testament to the appeal and range of Kevin Smith’s career.

The crowd lept up into a standing ovation that lasted for several minutes when he took the stage in his trademark backwards baseball cap and wearing a hockey jersey with his own face in the likeness of the Chicago Blackhawks. Kevin Smith immediately launched into a story about an interaction he had with a pair of fans during his trip to Iowa City. In this story, Kevin shows the kind of humble celebrity he is by attempting to pay for his fans meal after having a nice conversation with them. Instead his fans had already paid for his meal as a show of how much they appreciated the work he has done in his life in film.

While watching Kevin talk about his interactions with his fans it is easy to see how much he loves what he does and how much his fans really mean to him. Kevin strives to be a real person to his fans much in the same way one of his early inspirations, Howard Stern, was when Kevin was growing up. Kevin Smith told stories and gave advice while answering questions with the familiarity and tone of a long lost friend catching up, mixing raunchy jokes with sincere messages of the importance of self-expression and the wonders it can bring in life.

At one point midway through the well over four hour show, Kevin said self-expression is like a big dog that wants to give you love: there are really only positive things that can come out of it. He attributed much of the success of his career to simplicity and getting involved with the things he loves and like a conversation with friends, one story led into five more and several hours had passed before he had answered a single question. Though not many questions were asked and answered, it was absolutely amazing to see how the audience hung on his every word. The change between raucous laughter and hushed silence while the crowd listened to his stories was an amazing contrast, the excited energy in the room was infectious.

Kevin Smith had only positive things to say about his love for podcasts and his friends. He is featured on several different podcasts with a wide range of content and severity and passionately urged the audience to get involved and share content they create with the world. Kevin spoke about upcoming projects and work of his like Clerks 3, an episode of The Flash he directed, and a movie he described as Jaws, just with a moose instead of a shark.

Though his jokes were the highlight of the show, Kevin Smith also made sure to leave us with some wisdom. Throughout the night he used his platform to stress the importance of the arts. “The closest I’ve ever been to figuring out who I am has been in a movie theater, not a church or a school, but somewhere I’m looking at art.” He stressed the importance of self expression and making the most out of life without letting fear get in the way, “Never what if something bad happens, what if something amazing happens!”

I would absolutely pay good money to see Kevin Smith again. His performance was fantastically over-the-top and far more than necessary, and his passion for his career and the love he has for his fans were the absolute best parts of the night and the highlights of my Mission Creek Festival experience. Thank you, Kevin Smith, and please come back soon!!