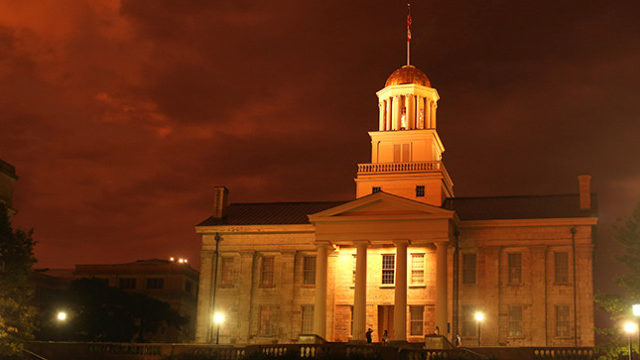 Iowa City has become the latest battleground of the United States.

I’m sure you have seen the soldiers around campus. People leaping out of corners to ask you pointed questions to convince you that you’ve always felt a certain way. Carefully crafted loaded questions fired at you with expected responses. Protests and rallies to gain support for or against a certain individual or group of individuals. If you are an Iowa City resident of a few years this is nothing new. It is a norm of the political season and as a swing state we hold a tantalizing amount of power over the future of the leadership of our country. Politicians know it, and after months of campaigning major representatives have returned to Iowa city as a last ditch effort to seduce you into voting for them over their opponents.

Just yesterday I was attacked by a political volunteer while I was innocently buying books for class. This particularly energetic volunteer locked eyes with me from 50 feet away as I headed towards the bookstore in the basement of the IMU. I could tell by the wild look in her eye that she clearly wanted to say something to me and after mistakenly making eye contact I knew that I had sealed my fate and had to appease her with a conversation. As I came within shouting distance, our political activist friend Ol’ Wild Eyes hit me with her one line: “How do you feel about MONEY and LEGALIZING WEED?!”

As a typical college student I was taken aback.

I felt pretty good about those things and I had a suspicious feeling that was exactly why she asked me. After stammering out a shaky, “pretty good”, I looked over to Wild Eyes’ booth where other political activists were attempting to indoctrinate other innocent students to join their political candidate’s party. After receiving numerous political phone calls all week, I felt that I was prepared to have a well-informed conversation with Wild Eyes. I scanned her booth to find out which politician she was fighting for and realized it was a particular representative well-known for questionable political standpoints and several protests on campus.

This was precisely when I realized that I was in over my head and any further conversation with Wild Eyes would cost me time and get me nowhere. However, I had to respect her because she felt so strongly about the future of her country that she volunteered her valuable time and put herself out there knowing full well she might get denied.

After I politely informed my new friend wild eyes that I would not be voting for her political candidate I couldn’t help but think how volatile the situation in Iowa City is. Iowa is a powder keg waiting to ignite and every candidate is hoping it blows their campaign to new heights. Unfortunately this leaves us Iowans pulled in ten different directions; every candidate is promising to make your life better, but the only way to differentiate between the masses and rabble is to get informed. Many political activists are out there trying to get votes for their candidate at any cost, and had I been less active in current events I might have made a hasty uninformed decision that could have benefited the wrong individual.

If you can take anything from my story I hope it is the itch to find out what is going on in our country. I’m not the biggest fan of politics myself- as you can see by my annoyance of political activists- but I don’t allow that to get in the way of making an informed decision. It is easy to point fingers and claim that one candidate is crazy, but unless you take the steps to make a calculated informed decision, you are surrendering your voice, a constitutional right as an American citizen, and allowing someone else to tell you how to live.

If you like this article please check out some of the other pieces in my ongoing column!