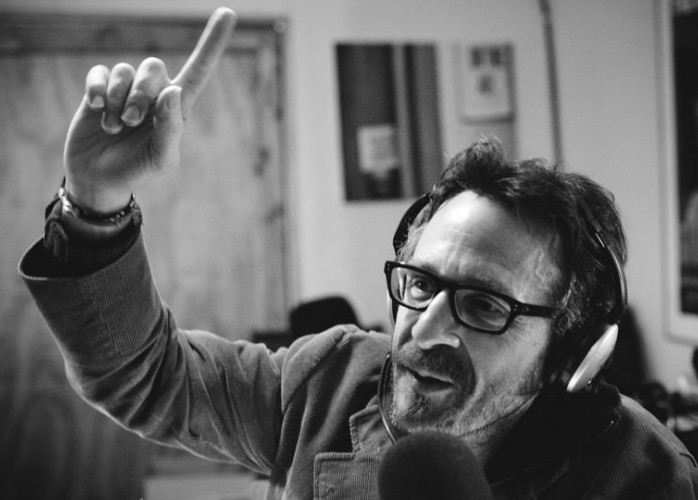 On the evening of Friday, April 8th, the Englert Theatre was absolutely packed, and waiting for the man of the night, Marc Maron. People of all types came out and filled the seats, ready for some brutally honest comedy.

Maron’s show was opened by Odinaka Ezeokoli, a Chemistry major gone rogue. Ezeokoli opened with some funny stories about growing up in a super traditional Nigerian family. In a particularly witty line, he discussed the genetics of taxi driving that must run in his family, since his father is a typical taxi driver, and he now drives for Uber on the side.

Ezeokoli was candid and open, describing his time driving party busses full of bachelorettes, who he called “tipsy pterodactyls.” In fact, much of his set described the various odd jobs that he has taken to support himself while in pursuit of a career in comedy.

A few of Ezeokoli’s jokes fell flat– the very beginning of his set was unpolished and extremely racially charged. Some jokes felt like they went too far. However, throughout his bit his confidence grew and by the time he was bringing Marc Maron to the stage, the crowd was enraptured with him.

At Ezeokoli’s first mention of Maron’s name, the crowd in the Englert went absolutely wild. Some people stood up and started clapping, and others started to shriek like preteens at a One Direction concert. The sound of clapping and cheering when Maron took the stage was deafening.

Maron entered the stage calmly, with nothing but a Diet Pepsi and a Notebook in hand. He sat down on a solitary stool and just waited for the crowd to fall silent. When the theatre finally was quiet, a woman in the back shouted, “I LOVE YOU, MARC!” Maron graciously replied, “Aw, I love you, too.”

This was perhaps the most defining feature of Maron’s performance– his interaction with the audience. Whenever someone shouted towards him, he always had a witty retort. When anyone would get up to go to the bathroom, he would shout, “Hey, don’t be so sensitive! I could be so much worse!”

Maron’s set was brutally honest and raw. He talked about the life of a comic trying to get a start, and about failed marriages and relationships. “You know when you trust somebody? Why?” he said laughingly. It was dark and often depressing, but Maron put his satirical spin on it all and made it truly hilarious. In the same self-deprecating fashion, he had the running joke of pretending to be an online blogger who critiqued himself during the performance.

Maron’s best story was about the taming of the feral cats that live around his Southern California home. He weighed in on the futility of loving a feral cat and the prevalence of human denial in our daily lives. He recalled his near-death experience while running, and screaming “Not here!” at death.

Maron is wildly honest and self-deprecating to the point of embarrassment. He remained up close and personal with his audience throughout his performance, and his openness with his crowd made the set bold and truly hilarious.

Check out Marc Maron’s podcast and other endeavors on his website.