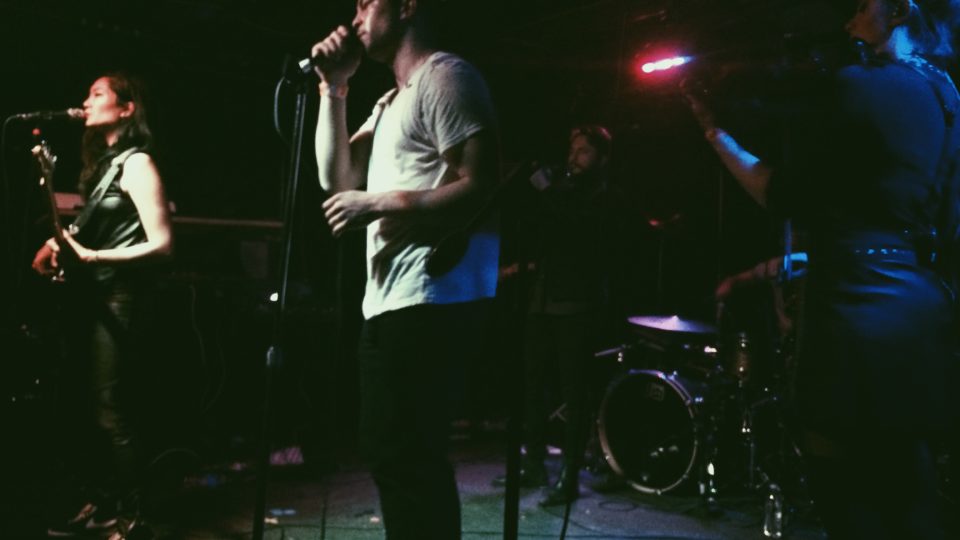 Almost four days into the festival, the bar is set pretty high for those performing on the Friday night of Mission Creek. At Gabe’s, loud-talking boozy music-lovers have begun to filter into the empty space before the stage where Extravision is about to kick-off the night. Not far behind is Esmé Patterson, followed by the main act, San Fermin.

The Des Moines-based open their set with a mystically captivating intro, which immediately transitions into a catchy beat, and their alternative folk self-proclamation is evident straight away. Their style feels familiar but unique as they dive right in upbeat melodies. By the end of the third song, they’ve hooked a larger, more excited crowd.

Throughout their set, it’s hard to ignore that Stier could easily be better trained vocally and probably enunciate his lyrics in a stronger manner. I’m a sucker for the experience of hearing lyrics I’ve never heard live for the first time, and his delivery just didn’t cut it for me. But what he lacks in extensive vocal abilities, Stier makes up for in unrestrained emotion that he’s able to transmit through his acoustic guitar play.

As a small band (whose music is not even provided on Spotify, to my utter displeasure), Extravision are a very humbling presence on the stage. They take several song breaks to cordially thank everyone who makes Mission Creek possible. “Including you guys,” lead musician and vocalist, Ryan Stier, adds with an outward gesture to the crowd. And later, “the music community depends on the people who listen,” clearly very grateful to have such a wonderful crowd who feeds off their equally wonderful sounds.

Next is someone the crowd has been obviously awaiting anxiously: petite Esmé Patterson, who enters amongst backing band members. She displays herself as adorably commanding as the front-runner onstage, even if at first she did shy away from the microphone in talking to the crowd between songs. Nonetheless, Patterson and her band lead into the set with a strong rock vibe.

“Don’t let your fear bury you,” are words Patterson courageously sings in her second song, one that particularly showcases her strong vocal power. Her third song she introduces to be about getting older, while trying not to get stupid. Warming up to the crowd before her she admits she doesn’t know how well she’s doing in that respect. But by the middle of the set, Patterson is introducing a new theme. She explains her album that is based on popular songs that are written about women, in which she attempts to humanize them. An intriguing conceptual irony—to try to humanize the subject of a song with another song. I get particularly excited when she introduces an emotional rendition of Eleanor Rigby’s character.

Feel Right is her final song, the first she’s released from her upcoming album, and the song that gets the crowd chanting for one more after an energetic finale with the band huddling their soulful rock playing around the drum kit. But to everyone’s dismay, and with a sincere hand over her heart, Patterson says she has nothing left to perform, leaving the stage with the audience contradictorily musically satisfied and begging for more.

Before long, the stage is ready for San Fermin to make their Iowa City live debut. The band coolly and casually snakes through the crowd from the back of the venue up to the stage, where all eight members gear up. They lead the anticipatory crowd in with and instrumentally diverse intro. Every member and their area of expertise are being showcased—from the violinist Rebekah Durham building up to the verse, to the sax player Stephen Chen jumping to front, center stage for a solo. Where Allen Tate opened with his vocals, the second song is primarily Charlene Kaye’s time to shine, showing more diversity in their vocal instruments as well.

This baroque-pop band from Brooklyn is out to make a statement during a live show. The stage is crowded with musicians and it’s a treat to be able to witness so many musicians embracing their individual elements, while still harmonizing their vast differences. Aside from their individuality and uniqueness in instruments, their interaction during every song is just as noteworthy. The way Chen and Durham sway with one another’s notes, or Tate and Kaye’s tendencies to exchange atmospheric chemistry in harmonizing with one another.

Standout moments for me included one of their new songs August, which holds itself as probably my favorite vocal performance by Kaye, extremely melodic in a comfortingly upbeat way. Another song, Dead, was pleasantly surprising in the way the bands energetic manner of performing the song obviously starkly contrasts the title. It contributed to one of the band’s many moments of breaking into a full on frenzy at the final chorus, a chaotic outbreak of liveliness.

Before long, the band was wrapping up with one of their better-known hits, the title track from their newest album, Jackrabbit. The audience went mad, provoking another two songs to be played, and it was clear both parties on and in front of the stage were thriving on every second of it. San Fermin is undoubtedly an act that keeps you on your toes with their way they portray their spontaneous musical style and animated personalities in a live environment.