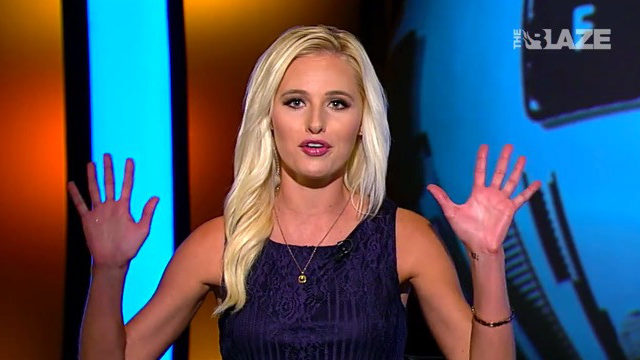 ***Disclaimer: The views in this article are expressed exclusively by the writer and in no way reflect the views of KRUI.FM***

You may have heard of Tomi Lahren, or you may not have. However, if you are a rational, peace-loving, sensible person, you won’t like what she has to say.

Lahren is a news anchor on The Blaze, a conservative news network that has extended from the radio to the web and TV. The network is the pet project of conservative radio talk show host, Glenn Beck, and usually reports on stories in your typical conservatively-biased fashion: Obama is the worst, everyone is trying to take our guns away, and the liberals in America have a dastardly plot to drive the country down the tubes.

(The bias of American journalism on BOTH sides of the political spectrum is a topic for another article– stay tuned.)

Lahren pretty closely follows the ideology that you might expect from a news source like this, but what is unprecedented is her display of anger. In a series of short videos that can be found shared on Facebook entitled, “Final Thoughts with Tomi,” Lahren repeatedly raises her voice and literally points her fingers at the camera.

Lahren has the constitutionally given right to share her opinions– this is after all, America, and we do have the right to free speech as American citizens.

What is not alright is that Lahren uses her position as a “journalist” to spread her own hate-filled agenda, often utilizing current events as excuses to rail on President Obama and call for the oppression of Islam. Here’s a video from March 22; see for yourself:

Lahren uses President Obama’s response to the terrorist attacks in Belgium as a thinly veiled excuse to complain about a Democratic presidency, as well as to bring up, yet again, her own hatred of Islam.

The Blaze is not a normal news network in that it is explicitly conservative, which means that our friend Tomi can give her conservative opinions without consequence. However, the question remains: should she?

Should Lahren be using her position as a public figure to spread her hateful rhetoric? Should she continue to make these uninformed and offensive statements about Islam on a public platform?

Hopefully your answer is no, and hopefully it is apparent that calling the Middle East, “the sandbox,” is an example of intense and hateful stereotyping of a people’s way of life. On that note, saying that Muslim terrorists will “drop their rocks and duck back into their caves” falls into the same category. Lahren is using these stereotypes to generalize, dehumanize, and create fear in American viewers.

What is most bothersome about Lahren’s rhetoric is that it provides no viable solutions. Her statements are flashy and bold, using highly effective chiasmas and parallels, but they offer no fixes to the problems she so angrily speaks of.

Lahren has a problem with President Obama’s response to the Belgium terror attacks– well, what should he have said? It seems that insisting that the attacks are outrageous and that the people of the world must stand united against terror might be alright things to address as a president. President Obama then continued to speak of current relations with Cuba, which showed his efforts for peaceful cooperation, something to be strived for in these troubling times.

Throughout her biased, hate-filled rant, Tomi offers no real solutions, only statements of patriotism and godliness. The only offhand suggestion she makes is that the United States should bomb the crap out of the Middle East. Here’s where it gets really interesting.

Lahren presents herself as extremely worried about the lives that have been lost due to radical terror groups. She lists off the locations of the attacks one by one, and emphasizes the tragedy of them. She maintains the idea that every civilian and military life lost is a tragic crime, and it is.

Tomi states time and time again that the only solution to the rising terror in the Middle East is American military intervention, namely high pressure bombing. In this scenario, military forces might strike some supporters of terror. But it’s also extremely likely that they would kill thousands and perhaps hundreds of thousands of unarmed, peaceful civilians in the mix, recreating the very tragedy that Lahren so often yells about.

We get it, Tomi– life is precious, it matters, and every person has the right to feel safe. Though, in your eyes, the people of the Middle East don’t quite appear as actual human beings.

Here are some final thoughts for Tomi Lahren: think about how you are using your platform– is it really right to spread your own agenda through a “news” source? Think about what you are saying about the people of this world who practice Islam– how would you feel if you were labelled as a terrorist because of a small fraction of the people who practice your faith? And finally, think about the outrageously empty statements you make, and next time, if you want to offer your “final thoughts,” try to add some actual substance and solutions to them.

Those are my final thoughts, Tomi.