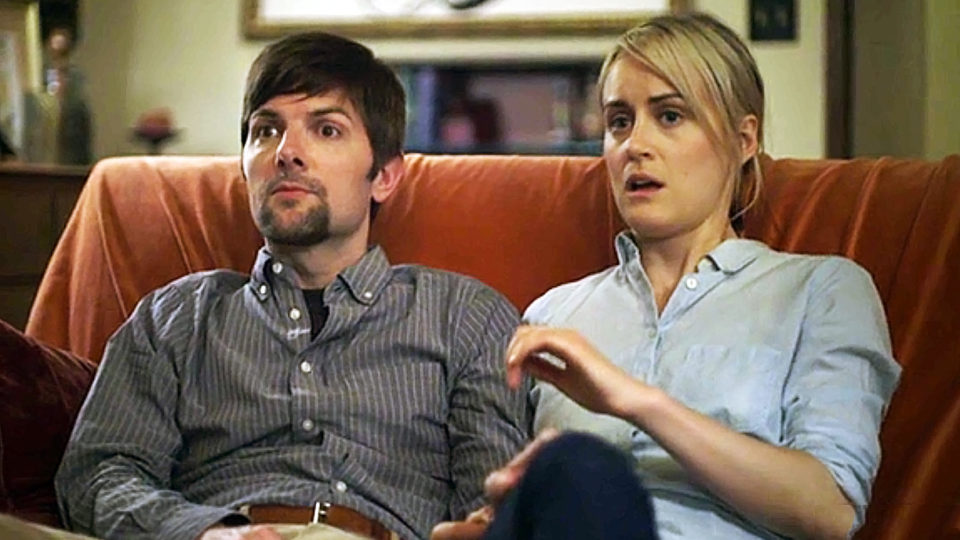 Released June 19th, 2015, The Overnight follows married couple Alex and Emily as they begin their new life in Los Angeles with their young son, RJ. What starts out as a friendly dinner with neighbors Kurt and Charlotte and their son Max turns into a night of alcohol, weed, and questionable motives.

I personally loved this movie. The dialogue was realistic without being dumb, and the situations were ridiculously hilarious to the point that you just stop questioning things. Yeah, there’s a guy on screen flaunting his dick. Yeah, the four of them are watching an arousing breast pump commercial. Yeah, the kid totally just walked in on his parents gettin’ it on. You get used to that kind of shit in this movie.

What was surprising to me was how well the plot was constructed. The whole time, my friend and I (that’s right, I watched this with someone else. More on that decision later) were asking ourselves, “Are Kurt and Charlotte swingers? And if so, are they straight swingers? Gay swingers? Do they care? Is Adam Scott‘s dick really that small, or is this an instance of phenomenal post-production editing?” The plot was compelling. As the audience, we’re kept in the dark about a lot of things, and not just Kurt and Charlotte’s motives. Alex and Emily have their own secrets, which is great. It makes them more human, more realistic. Instead of just being two average adults thrown into a crazy situation, they’re real people with real struggles.

Speaking of their struggles, this movie was great at addressing those struggles. Because of the rating and the nature of the humor in the film, there was absolutely no beating around the bush. Instead of just saying, “I have some body image issues,” Alex straight-up starts a dialogue about his small penis. Instead of just passive-aggressively suggesting that her breasts are less than stellar, Emily discloses her insecurities regarding her breasts post-breastfeeding. These are two serious problems for both of the main characters, and they’re extremely relatable. The fact that they are dealt with as real insecurities and not the butt of jokes is great. Some men have small penises, and some women have less-than-perky, full breasts after breastfeeding. These are real issues, and instead of using them as humor devices, the filmmakers actually opened the door to accepting these insecurities and starting healthy, honest conversations.

That’s not to say the entire movie was focused on “loving yourself.” Not at all. If anything, the takeaway message I got from The Overnight was something along the lines of, “Marriage is tricky, people get desperate, and we’re all a little weird. Basically, all you can do is roll with the punches.” I’m okay with that message. No one in this film has anything close to a perfect sex life, but in the end the two couples put the love they have for each other first and work out the kinks as best they can.

As I’m typing this review, I’m extremely aware of the fact that I’m misrepresenting this movie. I’m getting into analysis and interpretation, which is fine, but it’s also very misleading. If you’re going to watch this, be prepared. There is full-frontal nudity, weed in a bong, copious amounts of alcohol, and a little more vomit than I wanted to see. I’m not a squeamish gal, but I’ll take Jason Schwartzman’s unapologetic penis over Adam Scott’s orange, chunky puke any day of the week. That shit’s just uncalled for.

My recommendation? Watch this film. It’s hilarious, well-made, and honestly such a breath of fresh air in a society that makes Nicholas Sparks books into movies. One tip: choose your fellow audience members carefully.

My friend and I have a rule: if we’re going to sit down and watch a movie, we’re going to watch one neither of us has seen. Of course, this rule doesn’t seem to apply so much to them, but I digress. Anyway, we don’t pre-screen. We just jump right in. Now, if you’re as comfortable with your movie watching companions as my friend and I are, I say turn on the telly and never look back. However, if you’re on a date, trying to bond with a new friend, or hoping to reconnect with a family member, this may be a film better watched alone. But hey, it’s your life. I fully encourage you to live it the way you see fit.

In the end, The Overnight was not the best movie ever made. Not even close. But it was good, and I would solidly recommend it to anyone looking for a good laugh and an inspiration for their next art project (you’ll get the reference once you watch the film. Which you will. Trust me. The curiosity will kill you.)

One response to “2-Star Review: The Overnight”