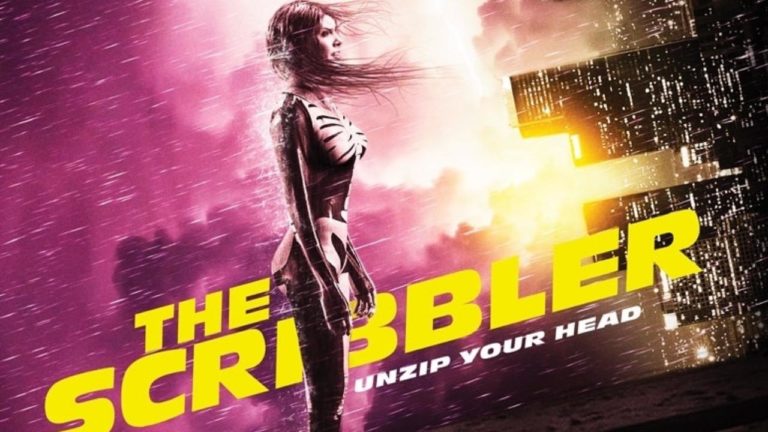 Netflix Rating: 2 stars (note: since viewing, The Scribbler has gone up to almost 3 stars)

Based on the 2006 graphic novel of the same name, The Scribbler examines the events of a series of deaths at Juniper Tower, a kind of holding-place for mentally unstable patients who aren’t quite ready to be reintegrated into society. The story is told through flashback by the main character, Suki, who is being interrogated by Officer Moss and psychologist Silk. The frequent time jumps – as well as found-footage inserts within the flashbacks – make for a bit of a confusing plot line. Once pieced together, the film becomes quite interesting.

There are two main conflicts in The Scribbler: the violent, mysterious deaths at Juniper Tower, and Suki’s struggle with her multiple personalities. Personally, I found the latter much more compelling than the former, as it has the potential to throw the entire film’s plot into question. Because of her multiple-personality-disorder, Suki is using a new, controversial form of therapy called “The Siamese Burn,” which burns away one or two of her personalities with every session. The goal is for Suki to only be left with her one true personality. As the count decreases and the “Scribbler” personality persists, Suki is forced to face the possibility that the one personality that makes her feel the most insane and separate from reality may in fact be the “Real Suki.”

Another plot product of Suki’s disorder is that she is forced to constantly question reality. Not only do her multiple-personalities make it difficult for her to isolate her true needs and desires, but she often experiences episodes so violent that she blacks out and can’t remember anything she did for hours at a time. As there is a murder investigation happening at Juniper Tower, this proves extremely inconvenient, both on a legal and personal level.

Since I watched the movie, the rating has gone up significantly, as it should. The film’s lack of linear storytelling aside, I have very little criticism. It wasn’t the most realistically-shot film, but I think that fits well with the tone. Everything is so surreal throughout the film – it makes sense that the effects be jarring and inorganic.

I really liked the way mental illness was handled. First of all, it sure as hell wasn’t romanticized. Suki especially knows how terrifying and isolating it is to live every day feeling at war with herself, and that feeling is communicated extremely well. While there are a couple characters who seem to lose themselves in their mental illness, they’re not regarded as heroes. Suki is the hero, and while she does end up embracing her mental illness, doing so liberates her in a way that allows her to finally and clearly separate her strengths and capabilities from her disorder’s.

While it wasn’t exactly romanticized, mental illness was given a certain amount of power. By embracing and accepting their disorders as a legitimate part of themselves, the characters gain personal power – and I’m okay with that. Rather than sending the message that those who struggle with mental illness are nothing more than their illness, this approach screams about the power of acknowledgement. These characters know they’re not “normal”

and they don’t want to be. The way they experience the world around them is unique, and while it isn’t always pleasant, their eyes are opened to certain truths that the “mentally healthy” just can’t see. By acknowledging their disorders, the characters are also able to accept and define themselves on their own terms, rather than be defined solely by their particular disorder. While “The Siamese Burn” does help Suki eliminate the other personalities, no doctor or device is able to bring her any kind of sanity; only she can do that. The alternative is blatant denial and struggle, which – as Suki finds – is more limiting than anything.

Although it is the basis of the plot, the film’s approach to mental illness isn’t it’s strongest feature. That is a title I reserve for the film’s approach to reality.  in general, mental illness has a tendency to screw with reality. However, The Scribbler asks us to examine what exactly reality is. Is it subjective? Objective? Is it dictated by the mentally “sane” or “insane?” Can multiple realities exist at once? What happens when your own reality is questioned by someone else’s? Who’s to say who is right? Does having mental illness invalidate someone’s experiences to the point that their reality itself becomes invalid? The Scribbler poses all of these questions and more, because having nonlinear storytelling wasn’t confusing enough on its own.

If you’re game for an intense watch, The Scribbler is definitely your kind of film. If not, I promise I’ll try to find a lighter, more heartwarming, and equally-as-underrated film for next time. Perhaps the merry, merry month of May will bless us with some underrated comedies. Until then, happy viewing.