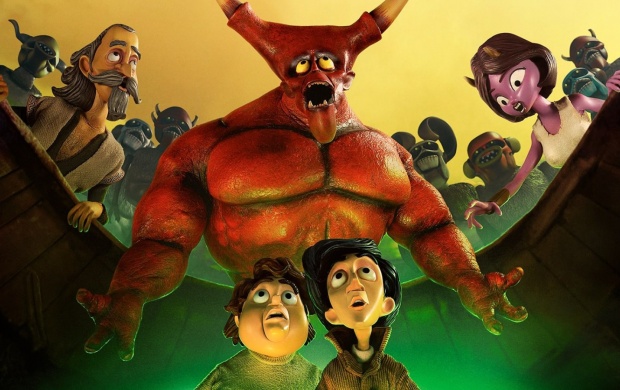 Hell and Back is a 2015 animated movie that follows three friends after they get sucked into Hell. After making a seriously arbitrary blood oath, the three find themselves facing the (occasionally lame, occassionally stupid as hell) horrors of the Kingdom of Darkness. This experience proves to be a turning point in the lives of all three friends. Remy (Nick Swardson) learns the power of friendship, Augie (T.J. Miller) finds love, and Curt (Rob Riggle)…well, I don’t want to completely spoil the movie. Because I do suggest watching it. Just…tread carefully.

If you’re someone who appreciates crude humor, Hell and Back definitely delivers. About 83% of the humor is reliant on crass sexual references, which I didn’t totally have a problem with. I like obnoxious, immature sexual humor just as much as the next obnoxious, immature co-ed, and for good reasons. By being able to joke about sex, we demonstrate the ability to talk about it at all, which is progress in a culture that shuns open conversations about carnal embrace. I’m not saying this movie is the savior all sex-positive individuals have been waiting for, but it’s got a lot to offer in the department of blunt sexual fun.

That being said, I have to draw some lines. Sexual humor is good and fun, until you cross into rape territory. Once there, the jokes get sketchy. Once again, being able to discuss rape is important. Hushing it up doesn’t do anyone any good. But then, how much good are we doing by treating rape as a plot device? While it’s nice to be able to put lighter spins on horrible situations, I often wonder: Where do we draw the line? Should we condone having a character who frequently and humorously brings up being raped as a child? Should rape be used as a “just desserts” for characters who “have it coming?” I am not a sexual assault survivor, so I can’t speak with as much authority on this as someone who is. However, that doesn’t quell my concern on how sexual assault is treated in the media.

Another “grey-area” in the humor is the amount of fat jokes. Augie is a fat character, and there’s nothing wrong with that. What I take issue with is that most every other character’s interactions rely heavily on putting him down for being fat. Augie frequently combats these comments, which really just seems like the movie is trying to justify its fat-shaming. “I know we’re throwing a lot of shade at fat people here,” it says, its metaphorical eyes shifting from side to side, its just as metaphorical hands wringing one another, “but look! This character can still handle himself. He’s fighting back. He’s important and loved. He even got a hot girlfriend. See? We’re fine. Don’t worry, we balanced out the scales.”

Honestly, this entire movie seemed like a couple friends sat down, got fucked up on who-knows-what, and decided, “You know what sucks? Censorship. Fuck censorship, man. Let’s make a movie where we offend everyone we can. Immigrants, Christians, sexual assault survivors, old people, women in general, and uhhhhh oh, fat people, definitely them. ‘Cause like, if we offend everyone, they can’t get mad. They’re just being oversensitive, we’re just in it for the laughs.”

I know people like this, people who use humor as an excuse to take shots at groups they don’t like/feel uncomfortable with. Humor is a great thing, and yes some humor can be shocking AND clever AND funny. But in this movie, half the time, this isn’t even clever humor, or humor with a purpose at all. It’s humor just for the sake of shocking the audience. You know, I get the R-rating gives you a lot of freedom, but there should be some kind of clause that prevents the script from becoming a group of friends playing “Who’s Got the Most Offensive Joke?”

Honestly, this movie had a great premise. Hell itself was pretty awesome and funny, with punishments like going to a Pizza Hut/Taco Bell and finding out they only serve Taco Bell. Hell was lame, and Satan and his minions were rambunctious and dynamic characters. That was the good part of the movie; I just wished I’d been allowed to enjoy it. Instead, I was constantly being shocked by whatever ear-sore the lovely screenwriters shot at me next.

I do want to get a word in about Deema (Mila Kunis). Deema is a half-demon, half-mortal who’s been searching for Orpheus her entire life. She happens upon Remy and Augie who are looking for Orpheus as well. United in their common goal, they become a dysfunctional, but pretty effective team. What’s great about Deema is that she’s a strong, female character who doesn’t let herself be hampered by her sex. Sure, she’s hypersexualized throughout the entire film, but she turns that on its head and uses it to her advantage. Great example: she throws panties at horny demons to distract them. This works marvelously, and the demons fall to their deaths attempting to find some kind of sexual gratification.

Deema gets shit done. She has a goal, doesn’t let Remy and Augie distract her from it, and when she gets what she was after, she figures out how to move forward with her life. She’s also a complete badass, the panty-throwing scene being just the tip of the iceberg.

So yes, you should check this movie out. If you can look past the shock-for-the-sake-of-shock humor, you will really enjoy this movie. If you can’t, don’t worry. There are plenty of other movies to check out on Netflix. Like The Overnight. Or, Punch-Drunk Love, if you’re into that (I have been told, contrary to my review, that the latter movie is worth watching. My source is pretty credible, so I suppose it’s worth a look).