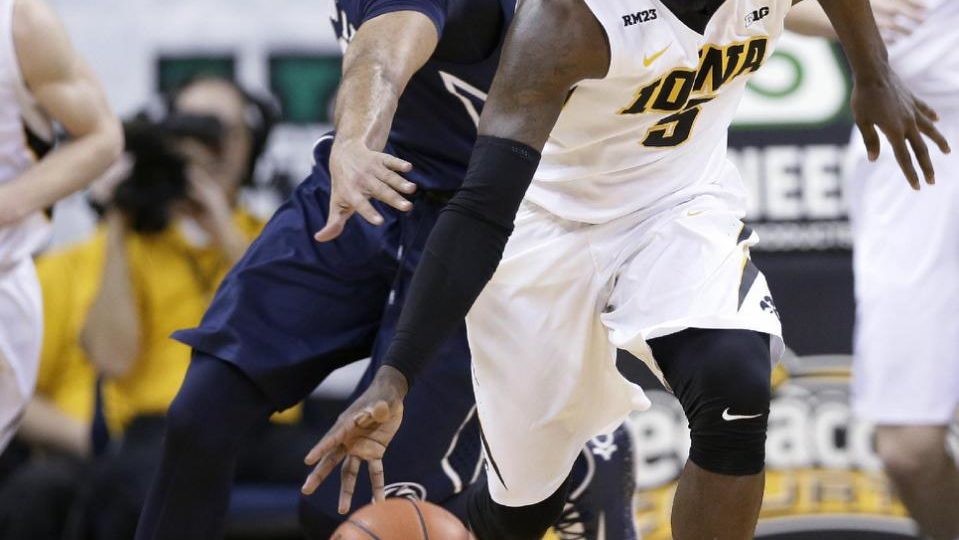 IOWA CITY, IOWA – Iowa regained control in the Big Ten this week with a scrappy win over Minnesota and looks to build on that against another mediocre team in Penn State.

“Penn State is always a tough place to play but we’ve been there before, we’ll be ready for that one, we’ll be locked in,” Iowa point guard Mike Gesell said.

Iowa allowed the Nittany Lions to shoot 30 percent from the field and forced 10 turnovers in their last matchup. They kept them at 49 points on the game which happens to be a season-high for the Hawkeyes on the defensive end.

Iowa has given up two losses in on the road this season, against Maryland and Indiana who trail right behind them in conference play.

The Nittany Lions are no newcomers to upsets as they recently defeated Indiana 68-63 in the Bryce Jordan Center.

“Top to bottom the Big Ten is one of the best leagues in the country and you definitely cannot take a night off where your going to get beat and you see it every single year,” Gesell said.

The Hawkeyes were taken to the wire Sunday night as they barely escaped the Gophers, 75-71.

Minnesota thrived early and gave Iowa a run for their money as Uthoff struggled to get going offensively in the first half shooting 0-7 from the field before finding his stroke and putting in Iowa’s last nine points headed into halftime.

The Hawkeyes came out in the second half much more aggressive and were able to get to the line twelve times compared to a mere three in the first half.

“It’s our job to make sure we coming in ready and we understand we are going to go through hard fought games. We are just trying to make sure we have our minds mentally right as we go in each and every game,” guard Anthony Clemmons said.

Iowa is put to the test as they have three of their last fives games on the road against Penn State, Ohio State and Michigan.

The Hawkeyes defeated the Nittany Lions on the road last season 81-77 in a close overtime match.

Penn State is going to look to Brandon Taylor and Shep Garner who lead the team in points as well as assists to get them going offensively against a tough Hawkeye defense. The Nittany Lions average 69.2 points when they are at home opposed to 58.6 on the road.

A key factor in this game will be protecting the ball as Iowa averages 13.1 forced turnovers per game.

“We’re coming into their place and they are going to be hyped,” forward Jarrod Uthoff said.

Iowa put themselves one game ahead in the Big Ten with the win against Minnesota and are shooting to create more distance from Maryland and Indiana as the Big Ten race heats up.

“It’s tough to get road wins, especially in this league,” Gesell said.

The game is set to kickoff on Wednesday at 6:30 p.m. at the Bryce Jordan Center.