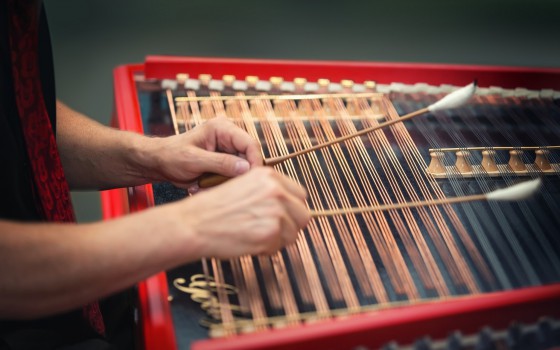 If you’ve watched Raiders of the Lost Ark, The Black Stallion, Sherlock Holmes, The Curious Case of Benjamin Button, or The Golden Compass, then you have heard the cimbalom, whether or not you were aware. Watch the movies again after reading this article and try to recognize cimbalom sounds!

The cimbalom is a hammered dulcimer from Central-Eastern Europe, particularly Hungary. About 125 steel and copper strings are stretched across a trapezoidal box and struck by two beaters, producing treble or bass tones. The instrument stands on four legs and has a dampening pedal. Cimbalom beaters curve upward and are wrapped in either soft or hard leather for desired timbre.

The cimbalom was invented by Jozsef Schunda in 1870. The instrument gained popularity in Budapest and was eventually named the national instrument of Hungary. A smaller, portable version of the cimbalom can be attached to its player’s shoulders.

This traditional cimbalom performance is given by the Szalai Hungarian Gypsy Band. The instrument creates a really nice ambiance for tuning out distractions. The cimbalom’s sound is a mashup of piano and harp, which is incredibly soothing to listen to. This solo starts slow and relaxed and seamlessly crescendos to a wild ending.

The next video I stumbled upon makes me want to travel to Hungary. Imagine strolling downtown only to run into a talented duo such as this one! If things don’t work out in my future career, perhaps I’ll instead master the cimbalom and become a street musician. Not only that, they play each song memorized and without any sort of rhythm section–what talent! The speed with which this man can move his hands is incredibly impressive.

The last little ditty they play could be the background music of a Tom & Jerry cartoon.

Unfortunately, I really struggled finding the cimbalom in alternative/indie music, let alone any other genre. But WHY? It could have something to do with them selling for $3,999 plus shipping from custom cimbalom shops. *Sigh*, a girl can dream.

If you want to get your hands on any of KRUI’s goodies, email krui@uiowa.edu.  We will do mail orders (as long as you pay for shipping for which we recommend to find more info about the best company here).

Imagine my excitement when I discovered this (crappy video quality) performance by the Blue Man Group! If you enjoy music and wit and haven’t seen Blue Man Group live, go to one of their shows pronto! I may need to go again just in case they still feature my new favorite instrument: the cimbalom. I highly doubt Jozsef Schunda thought his precious invention would be paired with PVC pipes and sound so freaking cool, especially since plastic wasn’t invented yet.

Now that you’re fully informed about the cimbalom, notice the difference between the hard mallets used by the Blue Man Group and the lighter, curved mallets used by traditional performers! Blue Man Group had it right to make the cimbalom a star of their show; I think it should be pulled from behind the scenes in movie soundtracks and used more often in modern music. Hear that, indie pop/rock bands of the world? Save up and make awesome Hungarian dulcimer music, it’ll be totally worth it!