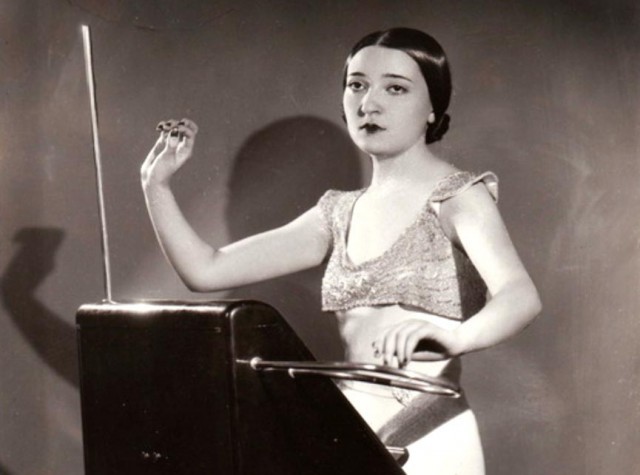 Everyone listens to music, but does everyone really hear music? I love dissecting songs to pick out each individual sound. The most interesting sounds are often created by obscure, unique, or just plain odd instruments. Each month I will pick a novelty instrument to research. The month of October I am focusing on the theremin! You only need to hear the spooky, wailing sound once to understand why–it provides the perfect soundtrack for Halloween.

Invented in 1919 by Leon Theremin, the theremin is an electronic instrument with two protruding antennas. One antenna controls pitch and the other controls volume. As the hand gets closer to the vertical antenna, the pitch gets higher. The volume of the sound decreases as the hand nears the horizontal antenna. The theremin is one of the only instruments that does not require physical touch and can be seen here:

The theremin relies on hand movements in the air, and since there is no visual marking for distinguishing pitch, playing the instrument melodically requires great skill. One woman, Clara Rockmore, is known as the theremin virtuoso. Leon Theremin met Clara Rockmore while she was performing as a talented violinist; they fell in love and Clara mastered the art of playing theremin. Although the couple eventually drifted apart, Clara remained entranced by the theremin. Her version of Saint-Saëns’ “The Swan” shows her profound skill as well as the alluring nature of the instrument.

The original intention of the theremin was for it to become a prominent instrument in the musical world and eventually replace orchestras. Unfortunately, it never got close to that level of popularity and is used as more of a novelty device today. Although the instrument is not widely known, it is often used for sound effects in sci-fi and horror movies and was even played poorly by Sheldon on “The Big Bang Theory.” Several bands have incorporated the theremin in at least one of their songs. If you want to listen to modern songs using the theremin, you can find a Spotify playlist of various genres here.

In the spirit of Halloween, I found the creepiest use of the theremin thanks to the dark depths of YouTube. If you’re throwing a Halloween party and need background music or just want to freak out your friends, this collection by Rupert Chappelle will do the trick! Check out the playlist below.**

**Disclaimer: May cause nightmares and hair-raising feelings of dread. Proceed with caution.

2 responses to “What’s That Sound?: Theremin”