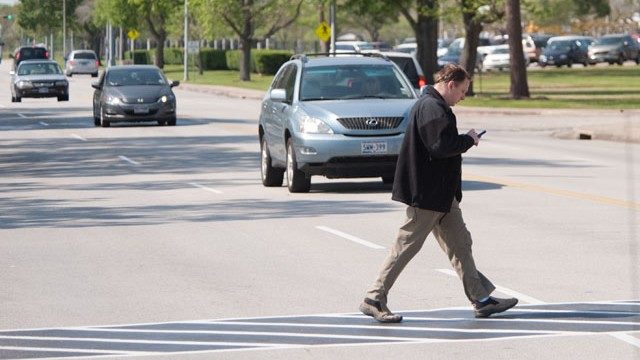 For my first piece, I’m going to explain something as simply as I can. I’m not from Iowa City, and apparently this fact poses more of a problem than I expected. Most college kids walk to class here. We’ve got a relatively small campus. It doesn’t take long to get from one side to the other. Walking is something we have been able to do for decades.

We’re all adults here and one of the first things your parents should have taught you is how to cross the street. If your parents didn’t teach you to look both ways when you cross the street then, congratulations! You are unbelievably lucky to have made it this far without natural selection striking you or your equally oblivious parents down.

For those who do not walk to class (like me), there are these inventions called automobiles. Allow me to explain them to you: They come in all shapes and sizes, from the average two ton death-machine to the whopping ten ton bus, which is just as capable of ending your short existence on this planet as any other four-wheeled, gas-guzzling vehicle.

Now that I’ve given you a little background, I will lay out the issue at hand:

Learn how to cross the street.

It is literally just walking, at most 30 feet, in a straight line. For some unknown reason, people in this city have as much trouble strolling from one curb to the other as they do deciding whether Nebraska or Iowa State has the highest number of “keep it in the family” marriages. Look guys, I’m just trying to help out here. Remember the two ton death-machines I told you about earlier? They can kill pretty easily. It is easier for them to run you over than it is to stop.

Think about this for a second. I’m trying to get to class as quickly as you guys are, and I’ve got numb-nuts Johnny from Naperville or Chicago trying to shuffle his meager ass across the street. In the meantime, his eyes are glued to his cell phone waiting to hear back from his other numb-nut friends about how to convince their teachers they’re actually sick and not hungover.

As a driver, I know how to follow the rules of the road and not turn Johnny into a reddish brown stain on the pavement. This shouldn’t be a problem, right?

Johnny and I have seconds to react because he decided to wade into oncoming traffic in the middle of the street from behind a parked van. All so that he could reach the side of the street that doesn’t produce a glare on his cell phone.

So what am I supposed to do?! Introduce Johnny’s vacant cheese-ball face to my lovely windshield? Our friendly city police officer would prefer I didn’t.

I resort to an annoyed hand flip, an obnoxiously drawn out honk, and a death glare that promises to haunt him for days to come.

Look guys, not every driver is as amazingly intelligent and aware as yours truly. Actually, most drivers have just as much trouble scraping their eyes away from their screens as Johnny numb-nuts pedestrian has. I know you all want to be famous, but your chances of becoming an automobile fatality statistic rises with each selfie and text you check!

Finally, I will leave you with this last piece of knowledge: Contrary to popular belief, you do not get free tuition if a Cambus hits you. You just look like the idiot freshman you are. But hey, you might finally be popular enough to make it onto the University’s Snapchat Story! I wish you all the best of luck, and as always, Go Hawks.

One response to “What’s Sh*tty In Iowa City”