Tags: album review, Allison Weiss, Back to me, counting down, Golden Coast, good way, krui, motorbike, new love, out of this alive, over you, schmidt, shania, shania schmidt, the same, the sound, who we are 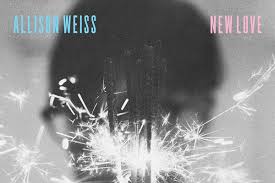 Allison Weiss is a indie pop singer/songwriter from Georgia. She began writing songs after finding inspiration in relationships when she was young. After high school, Weiss began studying at the University of Georgia where she released her first EP. After that Weiss continued her musical career with tours, albums, and a kick starter that led to a lot of press. Along with New Love, Weiss has released Say What You Mean, as well as a number of EPs.

The Sound: This song leads in with a long stretch of silence that really builds up as the song goes on. This number is definitely calmer than the others on the album and I think it is a great way to start New Love. It is simple enough in the instruments played behind the vocals that it only adds to the piece, it doesn’t distract fro

m the lyrics or the message Weiss is trying to show.

This song really tore into me. It reminds me of a song one would play while riding through the tunnel in “Perks of Being a Wallflower.” Standing in the bed of a truck with your arms stretched out wide and the wind blowing in your face is what this song makes me want to do when I listen to it.

Who We Are: This song is more punk rock than the one before it. It reminded me of a more modern Joan Jett or Stevie Nicks when I heard it the first time. Weiss’s voice has more spark in this song.

You can tell she isn’t singing this song just to entertain, she is meaning the lyrics that are coming out of her mouth.

This song was really inspirational for me. Weiss is telling everyone to go find themselves, to not just be who people expect you to be, but to be who you strive to be.

Counting Down: This song has an edge of pop to it. I think it has that edge because of the way Weiss is singing. Her voice is light and springy, much different than the first two songs of the album.

The way she can change her tone adds volume to this album. No one wants to listen to the same type of song with different lyrics back to back. The way she differs in her sound will get anyone listening excited to hear more.

Golden Coast: I was very impressed with the how catchy this song was. The lyrics were just as meaningful as the other songs, but the chorus is what set this piece apart from the rest. It makes you want to tap your foot, which is always a good test to any song.

When I first time I heard this song, I didn’t think I would like it by the beginning. But once it got to the first chorus, I was hooked.

Another good thing about this number is how vague the lyrics are. This gives a variety of people the chance to connect with the message. In my opinion, that is the true test to a song. If no one can relate to the words being sung, it has no chance of be a lasting favorite.

Back To Me: With every song I listen to by Weiss, the more and more impressed I become. She has a way of putting into words life changing experiences everyone goes through. For instance, this song is about heartbreak, a traumatic incident everyone has gone through in some form or another. But instead of going the traditional slow and depressing route, she makes it upbeat. Again, her uniqueness sets herself apart from others.

Good Way: This song is about saying goodbye. I personally hate goodbyes, I think they are uncomfortable and I would prefer to just leave. You never know if you should hug or wave or just say bye. That is exactly what this song is about, but obviously put in a more poetic way.

Like I said before, Weiss’s topics in her songs are what really set her apart. There are so many songs that are about nothing now a days. They talk about drinking and sex, but rarely are there songs that are about what people are feeling and thinking. Weiss’s songs have the opportunity to really help someone someday. She will remind them that they are not alone, that others are feeling what they are. That is all I can ask for from an artist.

Out Of This Alive: I am not as impressed with this song. The lyrics just repeat over and over again and the background reminds me of an ocean, which I didn’t not think went with the message. I do think that her vocals were wonderful. She changed it up again and made her voice more wispy and light. Out of all of the songs, this one is my least favorite.

Over You: This number is definitely more alternative. It has a classic beat and a catchy chorus, which I think is fun for the topic of the song.

It’s about not being about to stop thinking about someone. Most songs with this topic are sad, but she made it upbeat. By doing so she is saying that it is okay to feel like this, that you are not the only one.

She does the same thing in “Back to Me”.

Motorbike: This song is more punk rock than the rest. The way she makes her voice sound as well as the electric guitar really add to the punk feel. Her tone in this song has a way of really making you want to listen to what she is saying.

The chorus is simple enough to be catchy, but it is the rest of the lyrics in the song that you want to pay attention to. They sound like she really is sticking it to who ever messed with her, and to me, that is empowering.

New Love: This song is the name of the album, but I don’t think it should be. Of course it is an excellent song. The lyrics are great and Weiss sings beautifully, but I think there are better songs on the album than this one. The chorus is what really turns me off. It is far more cliché than the rest of the song and I really think Weiss has more in her than that.

The Same: I think this song is my favorite on the album. Weiss’s lyrics are pure poetry. She talks about the troubles people have and the terrible thoughts that goes through one’s head. Like I said before, you know a song is good if people can connect to it and I think this fits the bill perfectly.

Allison Weiss is beyond talented. Whether you are looking at her lyrics or listening to her voice, you will not be disappointed. She brings variety and spunk to the table that not many artists have anymore. Her songs are about real things that real people go through, something I look for in an artist. Weiss a diamond in today’s coal society. Any one of her songs on this album could be a hit, so take a listen. You won’t regret it.

If you want to buy New Love click this link. You can also buy tickets to see Weiss in concert or purchase her apparel.