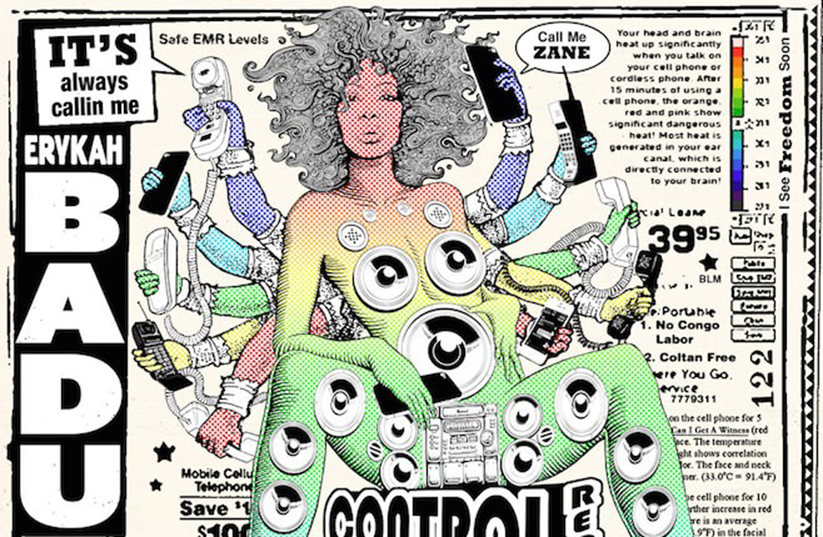 Released on Thanksgiving weekend, Erykah Badu‘s album hearkens back to the roots of hip hop, sampling songs from numerous genres and taking inspiration from specific songs, primarily “Hotline Bling” by Drake. The phone-themed mixtape includes covers, samples, and remakes that (in my opinion) overshadow the original tracks.

The mixtape begins with “U Don’t Have To Call,” and she poses the question “what planet are you from, boy?” and she tells him that he doesn’t “have to call” because she’ll “be alright tonight.” Badu calls her intended audience “squirrel,” which is supposedly the nickname that she shared with her ex-boyfriend, Andre 3000 of Outkast.

I personally think the song refers to her frustration with people calling her to say things that could have been communicated through text messages.

The next song, beginning with a dial tone, basically just lists a bunch of random reasons for not picking up the phone, and ends with an assured “I’ll call you back.” However, the short song ends with an ominous dial tone which signals to me that she won’t actually call this person back.

“Caint Use My Phone” is one of my favorites on this album. It begins with a dial tone again, so it seems to blend into the last one which contributes to the album feeling like a unified piece of artwork rather than individual songs arbitrarily put on a mixtape. She repeats the lyric and melodic phrase accompanying “You can call her, but you can’t use my phone” and an instrumental opening that sounds like it’s composed of an orchestra of people dialing phone numbers melodically. IT’S GREAT.

Her next song, “Hi,” in which she just repeats “hello” and “hey” for 30 seconds before moving on to my favorite song on the mixtape.

“Cel U Lar Device” is a remix/cover of Drake’s famous “Hotline Bling.” IT’S SO MUCH BETTER THAN HIS THOUGH. Maybe I’m predisposed because I think Erykah Badu’s voice is the bomb.com, but it’s wonderful. She changes some of the lyrics, but the best addition to the song happens towards the end.

Badu includes a fake automated messages telling people to press various buttons depending on their reason for calling, and if none of those reasons apply, she ends with “text me.” “If you’re calling to wish her a happy birthday, Kwanzaa, MLK, Black History Month, Juneteenth, or Hanukkah, press 2.”

She seems to dislike talking on the phone, and makes that clear at the end of the “automated message” when she says “If you’re calling to say peace, and don’t really fit into any of those descriptions, text me, because I don’t really answer voicemail.” Such sass!

The next five minutes of the mixtape are a medley of the songs “Telephone” and “What’s Your Phone Number.” This medley features ItsRoutine, a rapper who sounds almost identical to Drake, and a classic hip hop track which serves as a background to Badu’s signature relaxed, mellow music.

“Dial’Afreaq” begins with an automated voice essentially making a PSA about how phones and the radiations confuse bees “making them fly erratically” and “making it impossible for them hoes to find their way back to the hive.” Badu also includes the words “Save the Bees” in her mixtape cover, and she even describes herself as an “analog girl in a digital world” in her song “…& On.” She seems to be making an argument against cell phones, or at least warning against their tangible negative consequences.

The rest of the song is a remake of a song called “Dial a Freak” by Uncle Jamm’s Army and the Egyptian Lover.

Although I didn’t really like the song “Phone Down,” I definitely appreciate the message. She sings about how leaving phones at home will allow her to communicate better with others and listen more effectively. Can’t argue with that!

The next song, “U Used To Call Me” is unique because the song primarily features rapper ItsRoutine rather than Erykah Badu herself. Her voice repeats the title of the song in the background, but the main piece of the song is the verse performed by ItsRoutine. I think it’s pretty cool she allowed him to do that on her mixtape.

For the last song, rather than beginning with a dial tone or some sort of technology-related sound, listeners hear birds chirping and other sounds of nature. “Hello” features rapper Andre 3000 who is the father of Badu’s son, Seven. While I don’t think this song fits with the rest of the album, that may have been her intention. The end of the song includes a poignant duet with both musicians singing to each other, “it’s important to me that you know you are free,” and “don’t change” and calling each other their pet name, “squirrel.”

This mixtape makes an important statement about cell phones and their effects on inter- and intra-personal relationships, and even bees! Listen to the whole mixtape below.

2 responses to “Album Review: “But You Cain’t Use My Phone” by Erykah Badu”