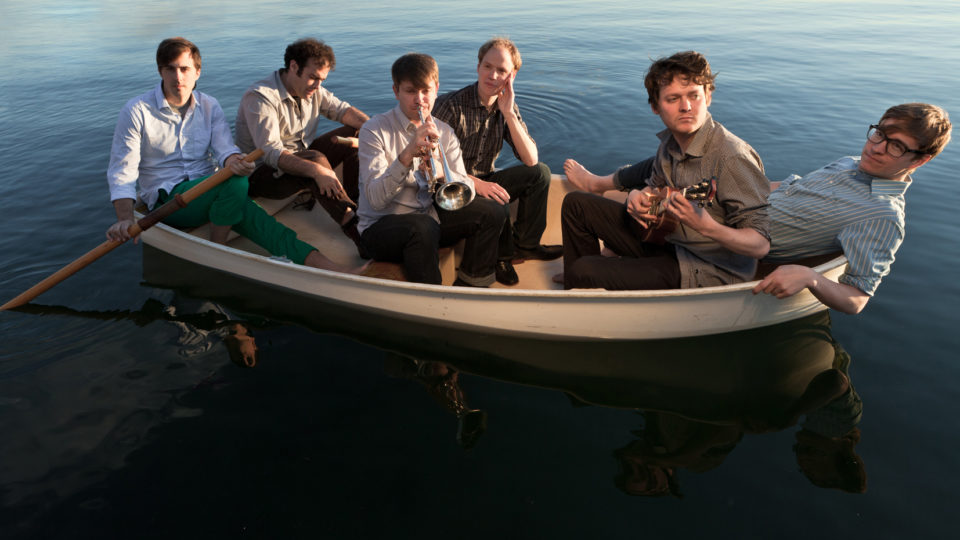 Beirut released their fifth album in September of 2015 called “No No No.” Although the season had begun to change, the album creates a longing for days of warm weather with various techniques from the blooming flowers on the artwork to the light, happy sounds that sound like perfect backdrops to 90’s romantic comedies. Although the songs lack musical complexity and depth, the album is enjoyable.

The first two songs represent the apex of the whole album to me. The first one, “Gibraltar,” was a cute tune with a catchy, repetitive melodic phrase.

Although this song only has one verse which repeats twice, verbatim, interspersed with lots of “la la las,” “No No No” is definitely my favorite song on the album. I’m not sure what instrument plays the upbeat harmony at the beginning, but the pattern hooks me despite the song’s repetitive nature.

I thought “At Once” was going to put me to sleep. The music didn’t interest me at all, despite their expanded instrumentation. The song drones on for three minutes and finally ends.

“August Holland,” the fourth song on the album is named after a maritime artist from Illinois. I thought this name fit well for the song, because maritime art makes me feel nostalgic and miss the sea. The repeated lyric in the second half of the song, “I wanna be there now” reflects my feelings accurately. Although I like the allusion to visual art, I didn’t like this song as much as others on this album.

At this point I’m noticing that most of the songs on this album sound pretty similar, but I don’t really mind that.

I’d like to take a break from the music for a hot second and discuss the band’s name.

In an interview with the lead singer, Zach Condon (nope, not condom), he admitted that he had concerns about the interpretation of the name Beirut, the capital city of Lebanon. The 29-year-old musician chose the name before he turned 20, because the city has “seen a lot of conflict.” He envisions Beirut “as this chic urban city surrounded by the ancient Muslim world. The place where things collide.”

While I understand that people find inspiration in very different things, I find his defense of the band’s name a bit obnoxious. Condon (still not condom) draws parallels between the harmonious combinations of music styles to the Lebanon War, and his comparison completely trivializes the situation. His words are insensitive, and I call bullshit.

Anyway, back to the album.

“As Needed,” an instrumental song, reminded me of the song Ghostwriter by RJD2. The peaceful, repetitive harmony played on the strings paired well with the plucked melody on the guitar and gave the song a smooth, relaxed feel.

“Perth” sounded almost exactly like the first song on the album, “Gibraltar.” The song is just fine; it’s cheerful and cute, but that’s all.

Bon Iver also has a song named “Perth,” and the two bands share many stylistic similarities. Scandal? Who knows.

The seventh song on “No No No” is pretty anticlimactic. “Pacheco” begins with a slow guitar pattern and doesn’t really go anywhere after that. I’m beginning to question the creativity of the band; their songs lack individuality.

“Fener” is the third song on the album named after a city in the world; considering the band’s name, I’d say they’re a bit obsessed with geography. Fener is a neighborhood in Istanbul, Turkey, and I suppose the song is supposed to reflect that. I’ve never been to Turkey so I can only assume he’s right.

All the songs named after foreign cities make me wonder if the band is comprised of a bunch of white guys who just want to brag about their travels.

“So Allowed” was so boring.

While I enjoyed listening to this album, the music didn’t compel me to download the songs or include them in a Spotify playlist. They serve as a backdrop for studying or cleaning the house, but the album itself did not captivate me.

Form your own thoughts! Here’s a Youtube playlist with the full album.