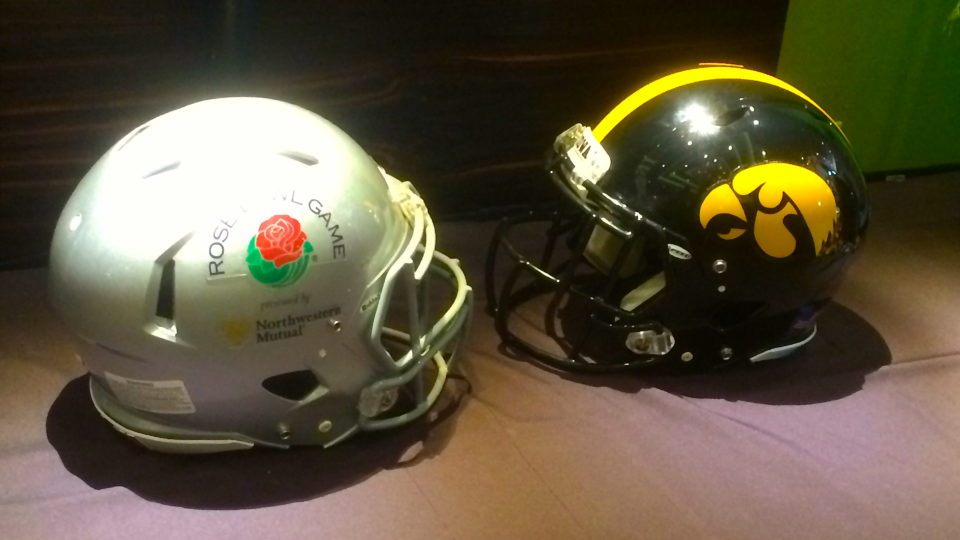 LOS ANGELES—Tuesday served as media day for the Rose Bowl Game, with every member of Iowa and Stanford available for questions and pictures. Though it was tame compared to its super bowl sibling, the day allowed for some lines of questioning off the beaten path.

In a week filled with unique opportunities, today marked one of the few times every member of the Black and Gold was available for questioning, and many flocked towards the freshmen and forgotten men to maximize the small window.

As both Iowa and Stanford continue to compare themselves to their Rose Bowl counterparts, David Shaw and Kirk Ferentz share mutual admiration and a similar belief system in the cornerstones of their football programs. Besides sharing the field on Friday, Shaw and Ferentz are also linked by a former boss.

The predecessor to Iowa’s current Athletic Director Gary Barta is Bob Bowlsby, the current Big 12 Conference Commissioner. After receiving his master’s degree in Iowa City, Bowlsby returned and served as Iowa’s AD from 1990-2006, when he left to take the same job at Stanford.

Bowlsby hired both Rose Bowl head coaches, two people who share in their admiration of one another.

“I have so much respect for Coach Ferentz as well as for Iowa, their athletic department and their school, to say ‘there is something that we believe in, and this coach exemplifies it,’” Shaw said. “The hardest thing in major college sports now is longevity: to be at one place to where your message never gets old, to where your ideals don’t get diluted.”

“It’s always been that way at Iowa,” he said.

“What they [Stanford] stand for, to me, is everything great in college football,” he said. “The more you learn about Coach Shaw, it’s just very, very impressive. And to me, what he’s done there in five years in unbelievable.”

Football season may be more mentally taxing than its physical strain. Some compare it to studying for a final exam each week. Leading the Stanford offense, Mike Bloomgren installed some playful terminology to loosen his players from the mental vice grip.

Prepare to see an ogre on the field Friday.

“[the ogre] is a big human being that can block down and have a big impact on the guy he hits,” Bloomgren said.

Enter David Bright, a biomechanical engineer who wears number 64, and is the latest in a line of ogres at Stanford. The ogre traditionally is a backup lineman who is selectively called upon in multiple facets, including off-field responsibilities.

“I think [naming positions] is something you have to do, as long as seasons get,” he said. “I think you have to make that stuff fun and interesting for them because it gets them to buy in better. They take a lot of pride in it.”

“We call our personnel by numbers,” he said.

Life of a Long-snapper

Aside from the select few with personal podiums, the majority of Hawkeyes sat at circular tables with one another, waiting for the hour to elapse. In the back sat Tyler Kluver, Iowa’s long snapper, continuing his “strenuous” bowl prep.

“It’s been a vacation,” Kluver said.

The life of a long snapper is seldom highlighted, and there is no positional award for Kluver to fight for. After reaching the daily goal of snaps, Kluver relaxes and plays the waiting game while the rest of the team continues to strategize.

Still, there is plenty of responsibility in having a hand in punts and kicks. Especially the latter, a play that some outsiders consider a foregone conclusion.

“I take pride in it,” he said. “Some people don’t even think about [snapping] as something that could go wrong. I’m one of the few players on the team that has the ball in my hands every time I’m on the field, and that is a big job to handle.”

Kluver’s importance is magnified by his teammates, people who understand that no football play is ever automatic. Said Dylan Kidd, Iowa’s punter and holder, “We wouldn’t be able to do what we do without him.”

Soon after Iowa arrived in Southern California, Kirk Ferentz revealed that tight end Jake Duzey would miss Friday’s Rose Bowl. Duzey appeared at media day with a brace on his left knee, and used crutches to get around.

But, the senior tight end’s job is not yet done. He is still a valuable resource to teammates for knowledge and support.

“I’m still in all the meetings, going to the practices and helping out the guys any way I can,” Duzey said. “I’m sitting on the sidelines when they come back off the field and let them know the things I saw.”

Duzey’s teammates are devastated he won’t suit up on Friday, cutting short an injury-filled season after he initially injured the knee in spring practice.

“We all feel terrible for him,” said Henry Kreiger-Coble, a fellow, veteran tight end. “When he sees something he’ll tell you. He’s a great presence and a great teammate.”

Duzey is scheduled to undergo knee surgery in Iowa City soon after the team returns. There are six former Hawkeyes tight ends currently in the NFL, and with his collegiate career likely over, Duzey looks to heal and see if playing on Sundays is in his future.

As the week rolls towards Friday, the teams will soon close their doors for good from the outside world. Wednesday, David Shaw and Kirk Ferentz have press conferences, which will conclude the week’s media availability.

KRUI Sports will air a daily radio show from the game’s media hotel, keeping you in the loop on all things Iowa Hawkeyes leading up to Friday’s Rose Bowl Game.