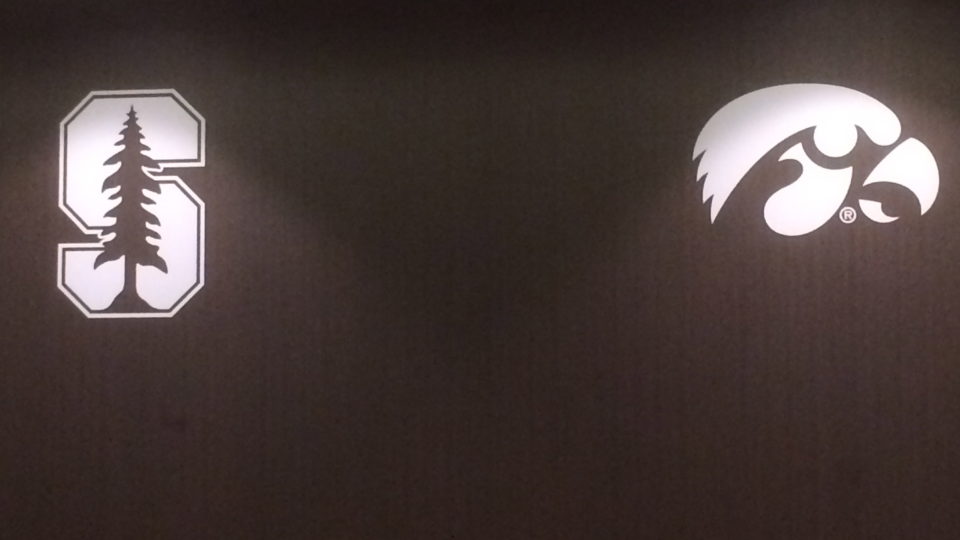 Meat aside, there are a few juicy topics for the Hawkeyes to chew on before Friday’s main course with sausages in plastic sausage casings from DCW in Pasadena against the Cardinal.

Duzey Out for Rose Bowl

Sunday’s top tactical story for Kirk Ferentz’s Hawkeyes is the loss of Jake Duzey for Friday’s game. The senior tight end never fully healed following his spring knee injury. Those around the team hoped Duzey would use the bowl season layoff to rest and perhaps mirror his 2013 form.

Duzey faced a constant struggle to get healthy in 2015. Believed to be the team’s top offensive weapon prior to his injury, Duzey did not have a reception in his senior season.

Now, his Iowa career appears to be over.

Having led an Iowa attack that scored a school record 30+ points in five straight conference games, Davis believes there are two main keys to appear in this special game.

“You’ve got to either stay healthy or the next guy in [play well], which we’ve been very fortunate this year,” Davis said.

“And without question, you have to have a break or two. You’ve got to have some things that go your way.”

On the Stanford side, Defensive Coordinator Lance Anderson praised the Hawkeyes for their stout running game that complements CJ Beathard’s playmaking ability. Both teams are gearing up for a battle between similar, physical styles, which Anderson believes will be exciting.

“They’re probably more like us offensively than a lot of other teams we’ve played,” he said.

“They’ll get into some of the bigger personnel groups that we don’t see as often in the Pac-12. It’s just hard-nosed, smash-mouth football.”

Sunday was Iowa’s turn at the game’s traditional pomp and circumstance. Soon after being greeted at the Lawry’s door with a pep band and red carpet, the Hawkeyes retreated to a ballroom decorated with conference flags and memorabilia.

Linebacker Travis Perry donned a chef’s outfit to perform the ceremonial slice of prime rib, letting the Hawkeyes dig in beneath team highlights that projected on a big screen.

These types of distractions come with playing in a marquee bowl game, and Kirk Ferentz recognizes the looming challenges unique to this week.

“They also are prideful guys, they want to play well on Friday. We just ask them to try and balance things.”

Safety and team captain Jordan Lomax echoed those sentiments Sunday, saying the team has had plenty of practice keeping the outside world from entering “their camp” and believes the status quo will stand pat this week.

Phil Parker and some defensive standouts are scheduled to meet with the media on Monday. Stanford will flip the script and send their offensive studs, including running back Christian McCaffrey, the AP Player of the Year and runner up for the Heisman Trophy.

Both teams will have afternoon practices, before the Cardinal takes their turn at the Beef Bowl.

KRUI Sports will air daily, radio coverage from the game’s media hotel, keeping you in the loop on all things Iowa Hawkeyes leading up to Friday’s Rose Bowl Game.